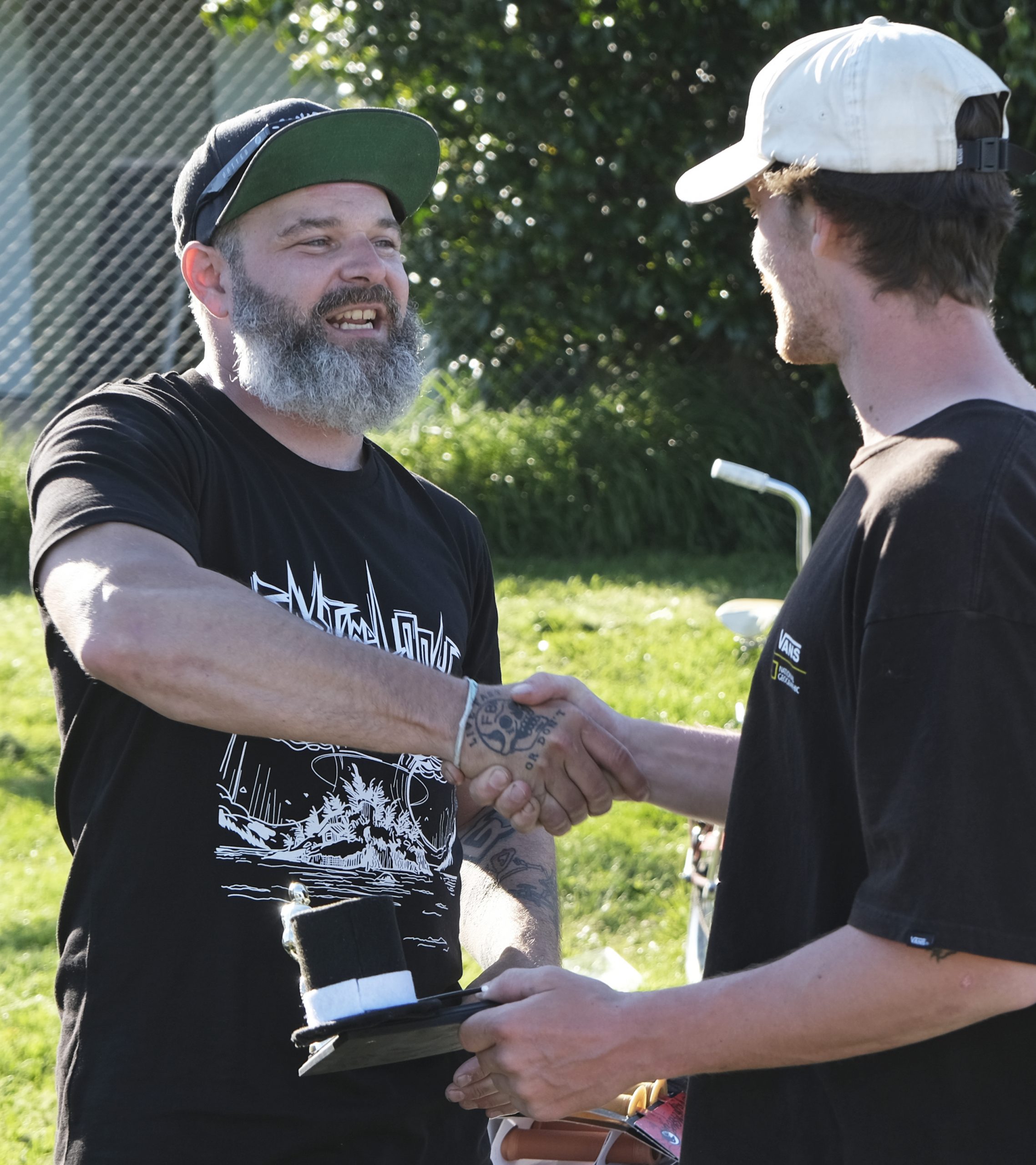 The Gorilla Jam—hosted in Victoria—is one of British Columbia’s longest running and most attended BMX events. We caught up with Josh Bissat to learn more about the history of the jam, its standout moments, and his inspiration for keeping it going year after year.

Hey Josh. Thanks for answering some questions about the Gorilla Jam. For those that don’t know you, can you share a bit about your involvement and history in BMX?

My name is Josh Bissat, I’m 40 years old. I’ve been riding for approximately 36 years. I was born and raised in Lillooet, BC. I currently reside in Victoria, BC and have been here for 19 years.

I spent my younger days racing and riding. Up until the age of 12 I believed racing was going to be my job.

The early 90’s BMX slump killed off racing in our town and the family didn’t want to move to stay at the competitive level we were at. Due to this, racing became harder and eventually I stopped. However, I never lost my passion for riding.

I was pretty lucky to have a tight scene of dudes in Lillooet. Eventually, we all moved away and currently I am the only one that still rides. Some of my best memories, however, come from those dudes and will never be beat! Lillooet also has some amazing hidden gem spots.

A few weeks after my graduation, I rode in a Playstation Skate Space contest in Whistler that was televised on OLN. I think I got 6th or 7th. John Pratt was there for winning the East coast contest. It was pretty sick to see him in person.

I moved to the Island a few years later on a whim. When I got here I knew that I wanted to help cultivate the scene. After my first year here on the island, 9 of us took a rental van for the week to Metro Jam. The trip included a few tight buddies and Ted from Seshin Bikes whom I met the morning we left.  That was one of the best weeks of my life!

At this point in my life, I recognize BMX has given me so much. I get my stoke from giving back to the community and seeing the stoke from everyone else. I also love seeing the progression of everyone in my community.

What year was the first Gorilla Jam? And what motivated you to start it?

The first official Gorilla Jam was in 2009. I did a jam in the summer of 2008 when I blew my knee. It was partly to keep the local Island Jam going.

Huge shout out to Doug Adams for all the years of his hard work and the inspiration to start the jam!

The Island Jam was a legacy that I felt needed to be continued. So I started the Gorilla Jam the year after it ended. Also, 100% credit is due to Crandall and FBM. The Term “APE” was in heavy use at the time and it stood out to me. Everything FBM does gets me in the feels. They do it right and for the fun… and that’s BMX! It also plays off the term “Guerilla” and we ambush the park like guerilla warfare.

What inspires the trophies that you make for the jam each year? Where did you develop that skill set? Also what other jams have you made trophies for?

So the trophies started as both a joke for the jam and a homage to my dad’s trophies that he used to make for his annual Hot Rod Show & Shine car show. He makes amazing steel art and made all the trophies. He’d then would trust my brother and I to paint them. The joke side of things being that the trophies are usually a play on words or just random things I think of (Best trick is a magic wand and top hat). I’ve done some trophies for a few different jams now and I’m very happy with the results and feedback. I made trophies for the Indah St Jam last summer which was my first real “hey can you make trophies for us?” That was also the first time I travelled with the art itself. I flew and had to pre-build them and assemble them when I arrived to make sure they got there safely.

The last few years I’ve made trophies for Heavy Nettle Trails, Rev Trails, the Timeless BMX Jam in Penticton this past summer, Troll Jam this past winter, and most recently did the Westride Distro “ComeShine” Trophies for Matt Perrin. I’m extremely proud of those ones as they aren’t my normal type of trophy, but I felt such a classic BMX vibe with them. They’re just VHS look-alike copies of the video, but it means so much more if you understand BMX videos as a whole! The ComeShine trophies are the only awards I haven’t handed out personally as I was out of the country at the time.

You had to take a little break with jams during COVID. Did you find any other BMX projects to work on?

I was hoping to get a small video part together, but my work schedule was and has been busy since COVID. I did start doing more filming for our boy Yannick Tysl this last year. That’s been enjoyable and it’s nice to be trusted with what I suggest when it comes to filming. Yannick kills it! Check out some of his Baby Ghostfinger Bikes videos on YouTube. I’ve got a couple casual clips together for my 40 year edit that I’d like to finish for the winter.

Most long-running jam series tend to develop groups of regulars – people who are there year after year and become part of the fabric of the event. Do you see that with Gorilla Jam? Who are those riders for you?

A huge reason for the success of the jam is the regular attendees! I can’t thank everybody enough for coming and trusting me with their time.

Everyone who comes feels like a regular to me at the jam now. We get more and more riders each year that are new. I’ve been lucky enough to see groups of riders grow together and become solid crews and friends. BC in general is a scene like that. There are lots of riders from small places that just like to ride. When you get everyone together, the vibes are amazing.

It’s great when it’s a jam weekend. There’s always someone new every year that is salivating for the jam cause they’ve never been. I’ll even go out on a limb and toot my own horn and say this jam has been a positive influence on our overall provincial scene.

Outside of BMX, do you plan any other events?

Events outside of BMX would only be costume parties and fun stuff like that. Both need to cross over more! I just like to make sure everybody is having a good time.

What tips do you have for someone trying to start their own local jam?

For anybody trying to do a jam…… Go for it! I’ve done this with no city help this entire time. Hit up everybody. It’s like anything else in life, you get what you put in. It’s worth it if you believe in your scene, your friends, and BMX. It’s just like riding; if it doesn’t work you can try again at your own pace. The only one holding you back is you. Believe in yourself! I’m full of self-doubt with these events. I’m terrible at using a microphone so I rarely MC my own event because I feel weird doing it.

Also, hit me up about trophies and jams! I’m all ears and just want our scenes to be more connected than they are already.

What are some problems you have run into over the years organizing this event?

I’ve never had too many problems when trying to do the event. The biggest is getting everything finished on time! It’s not uncommon to see me finishing the trophies in the parking lot of the jam or at the park itself. I’ve been trying to get better at that. Other than typical weather watchers messaging me the week before the jam saying it’s going to shit the bed, there haven’t been too many problems. I’ve been very fortunate all these years. The biggest hurdle I think is trying to give everyone a place to be after the jam. It’s great having everyone together and I’d like to carry that on as long as possible.

What are some Gorilla Jam highlights or memorable moments from years past?

The memorable moments just keep coming! The jam is a 3-day event filled with typical BMX shenanigans. The list could go on and on. We’ve been lucky enough to have so many rad years under our belt. Anytime we have our local pros come out, it’s great for the event.

A few of the highlights over the years are Gorilla Jam eve parties every year! Thanks Clay and Cindy for all those wild times. It’s now mostly beers and bikes on the eve of the jam, which isn’t any more tame with bike ring wrestling matches in the center of town.

In 2018, I went to Swampfest and met tons of people including now friends from Texas, Lucas and Hillary. They flew up for the 10-year event in 2019 after only knowing them for 72 hours. That was easily one of the greatest highlights to me! That’s how Corey Walsh ended up coming too. While at the 2019 Swampfest, we chatted about him possibly being in Vancouver at the time of the jam. To my surprise, he said his schedule was free that weekend. The jam weekend came and he showed up and ripped. It was another major highlight to me because that dude could be anywhere in the world riding and he chose our little jam. Lots of people were stoked and that’s all I could ask for.

This year’s jam was a solid 5 days of memories. Getting to tie in my 40th birthday party to the jam and the new FIT video premiere while hosting a BBQ/after party was awesome!

Some other notable past highlights would include

Big shout out and thank you to The Northern Embassy for doing this interview with me and all of my awesome sponsors over the years! The jam would not be what it is today without all the support.