Posted at 10:16h in ARCHIVE, FEATURES, HOME by Joel Fortin 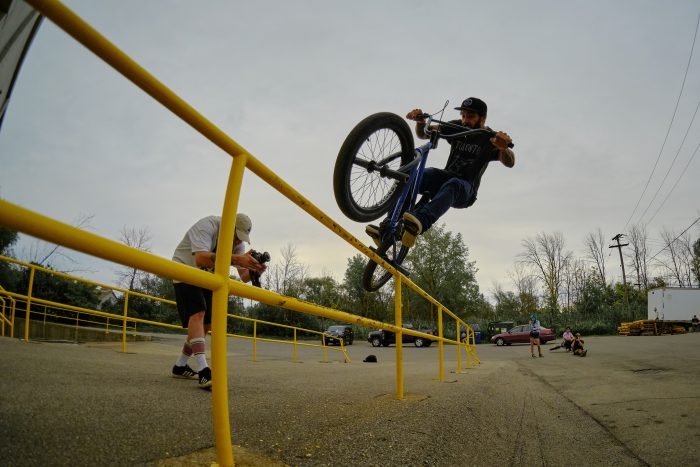 If you’ve ever been to a wallride spot in the GTA, odds are that the highest tire marks belong to this dude. Chi’s been killing it forever and continuously pushes himself to learn new tricks and film new parts. The dude’s got a great eye for spots, and a selection of tricks that are completely unique to him. A few weeks ago, with the NE website re-launch on the horizon, I figured it was a perfect opportunity to hit Chijioke up and get the scoop on what he’s been up to. Read on to get caught up with one of Canada’s best…

Hey dude, thanks for taking the time to do this! I wanted to reach out to get a sense of what you’ve been up to this past year. You recently got out of your place in the city and moved further north. What brought that on? What’s the riding scene like up there?

Yo, likewise man. I appreciate you sending these over! All things considered, last year was a pretty busy one. I had the opportunity to relocate to Georgina which has been a trip. My wife and I just got really lucky and things worked out, so we went for it. The riding scene up here has actually got me pretty stoked. Obviously, the spots aren’t as plentiful, but I’m excited to have a good local park and a few good set-ups/homies close by. The city is still mad close too, so I’ll be there plenty.

How did everything going on in 2020 in terms of travel restrictions and safety concerns impact you?

I got lucky and squeezed in a week in Austin before everything got locked down. I was there in March and had a great time (shout out Dan for putting me up!). I came back and like days later everything went nuts. I definitely just chilled locally after that; I didn’t do any traveling outside of Ontario. That was a big change, but I think we took advantage of being forced to look around different parts of the province. We had a great year in terms of new spots and we rode a lot, so I can’t really complain. 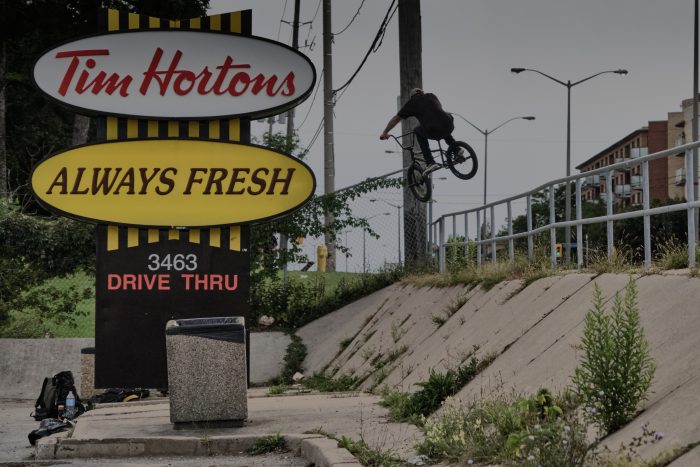 We worked on your Merritt edit together for the majority of the summer which was a blast. Every time we were out filming, I forgot that there was a pandemic going on. Haha. What was filming for that project like for you? Was your approach to this project different given the circumstances?

Yeah, thanks again for killing the filming/edit on that dude. I appreciate it! Like I said, we really took advantage of the situation I think. We kept a small crew and went to tons of new areas with awesome spots. I think for a lot of street riders, the pandemic just made it easier to get things done (tiny silver lining). Places were definitely less busy. We pedaled a lot of kilometres through industrial areas this year.

Your ender in that video was crazy by the way. It was interesting watching you go through the steps of seeing the set-up for the first time to actually getting the trick. What goes through your mind when you pull up on a set-up like that? Was that a trick that you had in mind previously?

Haha. Thanks dude. Honestly when Liam described it, I wasn’t sure if it was gonna be anything I’d want to mess with. Then when we rolled up, I was like ‘Nah it’s weird’ and was ready to keep cruising. But of course when you sit and stare at a spot for a few minutes, the wheels start turning and you end up just playing around. It definitely took some convincing to get up the bank, but I realized the abubaca to the side of the column wasn’t actually too bad. It set you up perfect for the pegs, so I gave it a real go. I’m always into brake to grind stuff, but that’s such a unique set-up. I’m just grateful it worked out with a bit of trial and error.

Ryan Eles: You’ve been killing it for quite some time now. Overall, what motivates you to keep pushing riding and filming?

Thanks brother, likewise! Honestly, I don’t think there’s anything specific that keeps me going, other than not really knowing anything else. Haha. I’ve been making BMX a priority for over a decade, and I don’t really know what else I’d want to do with my time and energy. Nothing is as fun as riding a good spot with the homies, and nothing is as rewarding as putting out new stuff for the community. That’s just how my life is, and I wouldn’t change it if I could. Haha. 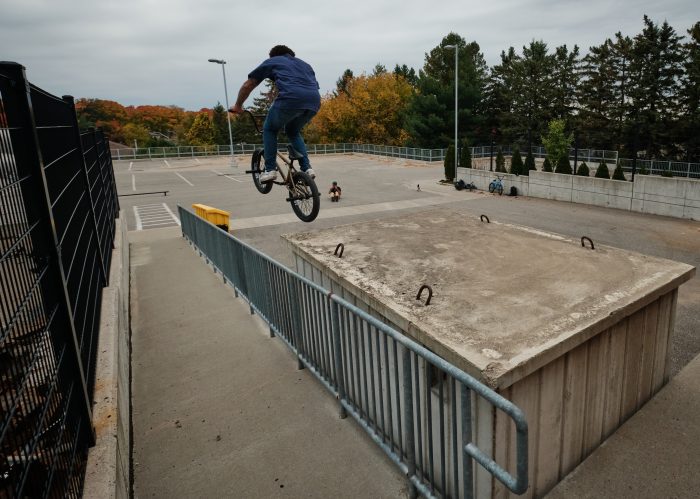 Since I’ve known you, you’ve always liked changing up your bike: From brakes to no brakes, and more recently you’ve switched over to a coaster from a cassette hub. You seem to have settled on a coaster and brakes now. Do you think you’ll stick with this current set-up for a while?

Yeah, I love messing with my set-up. Making the switch to a coaster last year definitely made the season more fun. I hadn’t ridden a coaster for more than a couple days in over a decade, but I made myself keep it on for a week and it just stuck. Everything feels so cool, and it’s fun looking at set-ups differently with coaster stuff in mind. I’ve never been able to commit to one particular set-up for longer than like 6 months it seems. Haha. That’s probably a habit from the shop days, but it’s a lot of fun to change things up. I’m considering taking the brake off for a little bit, but I’m sure that’ll only be for a week. Otherwise, I wanna try and stick with the straight cable coaster thing for a little bit longer.

Justin Schwanke (JS): Who influenced your style in terms of all the brake tricks?

When I was growing up, I was into dudes like Chase Dehart, Brandon Hoerres, Corey Martinez, Biz, Wiz, and any of the Midwest ramp legends.

JS: Who are some black Canadian riders you’re particularly stoked on?

I’ve always looked up to dudes like Jaumell Campbell, Dave Thomas, and [E]. Kwab Karikari stays killin it. Honestly, I don’t really know too many… I guess that’s a problem right there. 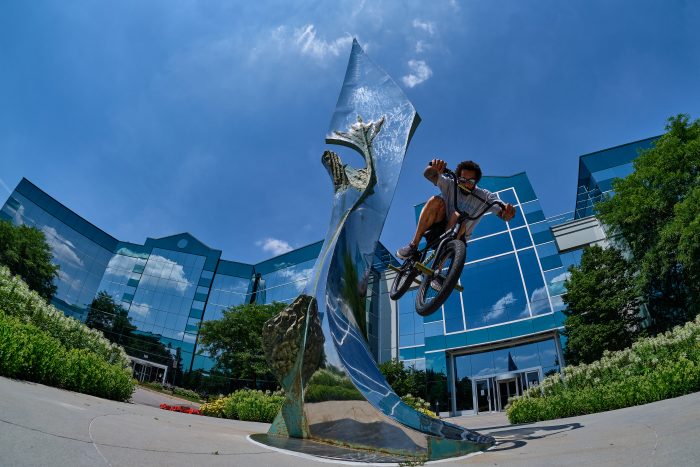 JS: Can you talk a bit about your professional life? What got you into web development?

I was working at bike shops for over a decade and had hit a plateau. I’m honestly not sure what drew me to web development, other than the fact it would allow me to keep riding as much I was, if not more. I also wanted a career that wasn’t hard on my body. Coding seemed like a good educational investment so in I went. It’s not the most exciting stuff, but I could for sure be doing worse things. Haha.

JS: Have you done any web development work within the BMX industry?

I worked with Cinema on their new site which was a ton of fun. It’s really cool to be able to combine those worlds; it made the process that much easier.

Aaron Gates: You came over from riding MTB back in the day, right? What is it like to see everyone going the other way?

It’s cool to see people showing love to big wheels. I’ve always had a soft spot for MTBs. Haha. I’ve been meaning to pick up a trail bike again. 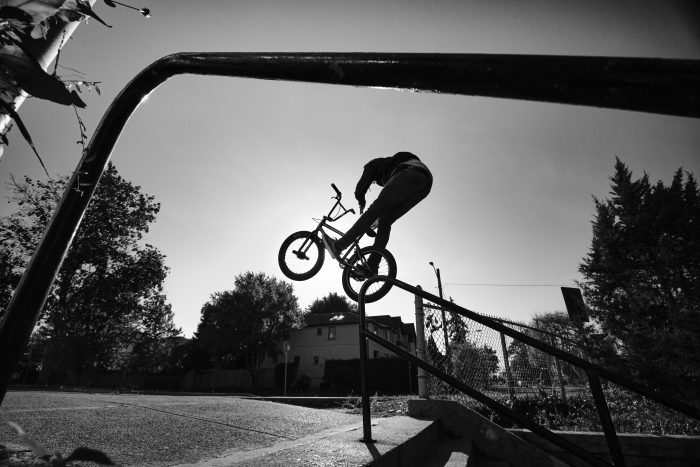 During the winter, what were you doing to keep yourself from going stir crazy? Was the Keswickian winter significantly worse than the T.O. winters you’ve been used to?

Winter here was pretty good. I think parks closing due to COVID had more of an impact than me moving north. For the most part, it was pretty dry and mild which was awesome for flat rail sessions. When real winter did set in though, I would roll around a tiny part of my basement. Renovations on the new place were keeping me mad busy as well.

What are some things that you’re hoping to get done in 2021? Any big travel plans if the restrictions ease up a bit?

Just the same as every year: Work as little as possible and ride as much as possible. Haha. Fingers crossed that the travel restrictions ease up and we can get back on our bullshit, but if not, we’ll make Ontario work for us again! There are tons of amazing things still waiting to be ridden all over this province.

Thanks again for doing this dude! Is there anything you’d like to add?

Thanks again dude. I appreciate the opportunity!