If you missed our Think Local launch, click here for the original post/intro and/ or here for our first shop spotlight with BMX Gallery 4130. Today we look at a shop that has been a huge part of the Saskatchewan scene for many years, Spoke N Sport in Saskatoon. THINK LOCAL!

When and why did Doug’s Spoke N Sport open?

Dougs Spoke N’ Sport opened in 1987. Doug Cushway was a previous employee of Walters Cycle, he then decided to start his own venture and opened up shop.

When did it get into BMX parts?
We always carried BMX parts and accessories since we opened, but it wasn’t until about the year 2000 that we got heavy into it. I give lots of credit to Jay Woytowich for that, for years him and a few other guys were the driving force behind the local scene, with his connection they we able to host jams that really brought everyone together, and showed what BMX was about.

What’s the overall vision of the shop and what makes it unique?

Like most shops, Dougs has a pretty laid back vibe. As far as BMX goes, we’ve always tried to stay on top and give the riders what they want, and bring in products that we believe in. Also, we pride ourselves on providing the most kick ass service in town, Doug is known to go to extreme lengths to make customers happy, that being said, our shop does very well without advertising, but by word of mouth.
Why should riders support their local BMX shop?
I know this will probably get repeated time and time again, but without shopping local, you’re not getting an opinion from someone who knows the product, therefore risking buying something you’re going to regret. Also, most kids don’t understand that most shops will hesitate to provide warranty for something you bought online.
Where did you buy your BMX parts growing up?
When I first started riding I mostly just went to whichever shop that had parts that I liked, I didn’t have a preference like most people. As the years went by, I developed a relationship with Jay, and the guys at Spoke N’ Sport. They were always willing to help a brother out, from cutting me a deal so my broke ass could buy a new tire, to teaching me how to swap out my bottom brackets, and even hooking up a free tube every now and then. Those are the kinds of things that stick in your head, and what keep you coming back. I hope to provide that image for every kid that brings a BMX bike in.
Do you have any jams in the works for 2015?
I was chatting with the guys the other day, we hope to do something in early spring. Back in 2006 there was a jam called the “Pool Party” which was strictly a bowl contest at the park, so we were thinking of bringing it back again. Since most kids seem to ride ledges or do fly-outs, it’ll be interesting to see what the turn out is.
What’s the raddest thing that’s happened at the shop since it’s been opened or that you can remember?
Only thing that comes to mind is on the last day of our previous location, we had some daddy pops after work and decided to have a burn out competition with the electric bikes. With the tires turning at over 60km/h we put em up against a wall and burned rubber for over 20 minutes. Ive never laughed so hard in my life, smoke was billowing out of the doors.
What’s the weirdest thing that’s happened?
Weird shit happens on a day to day basis. The other night a guy came running down the alley, flipped our dumpster, and continued running down the alley screaming. There was also a guy that came in recently, talking about how Willie Nelson and God were having a concert at one of the nearby hotels, and that George Bush, and George Bush Sr. would be in attendance. That was definitely one of the more weird things that have happened.
How’s the SK scene these days?
The SK scene in my opinion is booming. A couple years ago there was a bit of a lull as far as new riders, but since then there’s a ton of new talent that has sprung up. Saskatoon and Prince Albert probably have the biggest scenes in the province, but places like Regina, Yorkton, and Moose Jaw are definitely growing as well.
What’s your opinions on BMX trends?
Without trends, BMX would be so boring. It’s what makes our sport more interesting.
Do you have a message for rider’s who order their parts from US mailorders?
Its hard to answer this without sounding bitter, but ordering online hurts a local shop more than you think. A lot of kids don’t understand that we can order the same product just as easily as ordering online, and depending which province you live in, we can get it faster. Just like when I was growing up, without a shop I wouldn’t know how to properly fix my bike, nor would I have any tools to use. I know that’s not the case for everyone, but its pretty common around here.
Final remarks or shout outs?
Shout out to:
-All the rad customers who put a smile on my face and support our gold website
– 1664, Tenpack, Kill Em All, and Ryder for holding it down in Canada, and providing us with the best product
– The Northern Embassy for killin’ it with Canadian content and keeping everyone in the know.
-My boss Doug, and the staff at Spoke N’ Sport for being the raddest group of dudes known to man, and for dealing with my grumpy ass sometimes.
-And lastly, to anyone else that’s ever come by our shop, whether you’ve bought something,came to chat, or brought down a case of beer. We’re always happy to have you, and keep the good times coming! 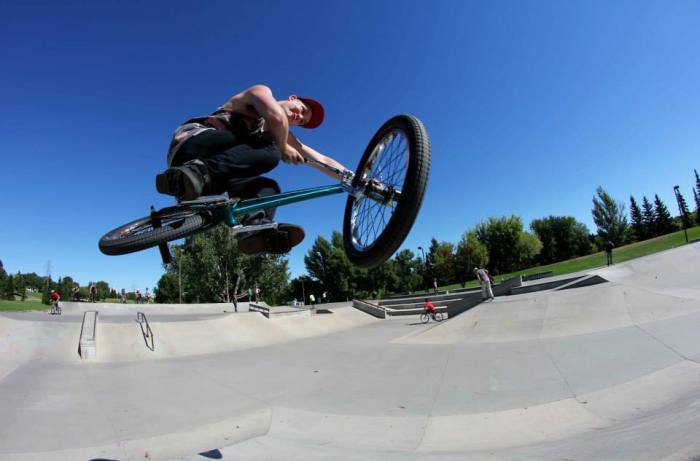