Posted at 07:36h in ARCHIVE by Prashant Gopal 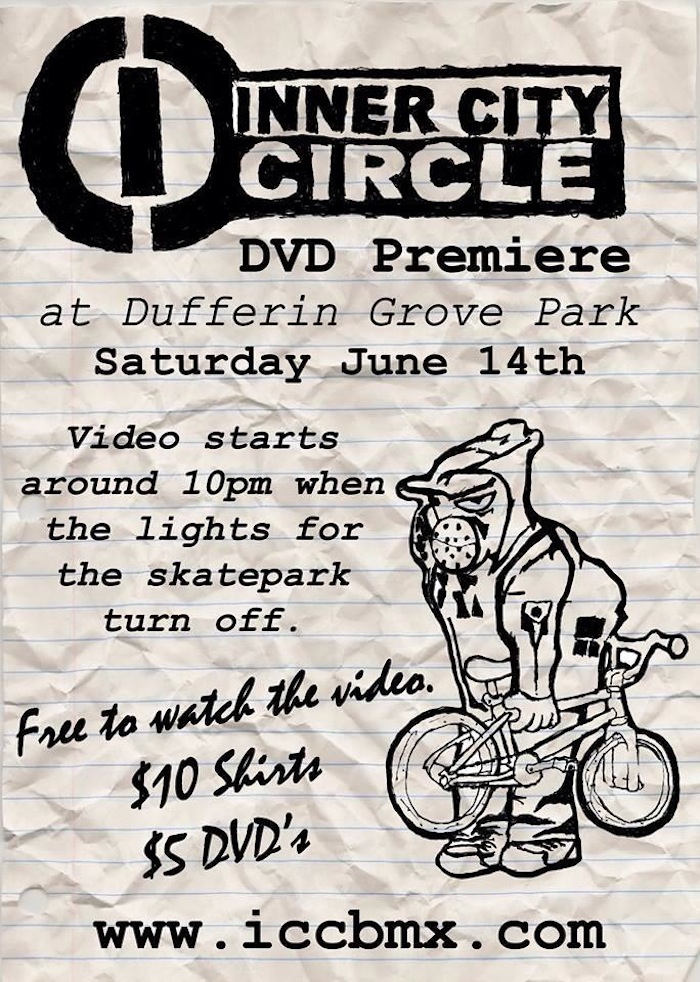 This coming Saturday, June 14th at Dufferin Grove Park in Toronto, Chris Silva will be premiering the 5th in the series of Inner City Circle videos. Come out when the lights in the park go off around 11:00 and Chris will have his pirate premiere set up and airing his video in the open for everyone. Copies will be available, along with limited ICC merchandise. This is a public park, so please no bozo behaviour if you want events and places like this to continue to happen.

With a new video coming out, and an ICC archive website launched, I thought I’d ask Chris a little bit about this project, ICC history, and more. Read what he had to say below, and we’ll see you at the park on Saturday.

Who/what is the Inner City Circle, and explain your involvement?

The Inner City Circle(ICC) is a lot of things and a few different branches of people. ICC started as just a small winter project that “Drifter” Dave Stewart and Taro Saito put together to get a group of riders from around the city (most of us didn’t know each other) and open a skatepark during the winter of ’03/’04. A large group of us collectively made the skatepark happen, became great friends, and when spring came we took the skatepark down.The skatepark was called The Inner City Circle.

During that spring of ’04 a large group of us continued to ride together, film and ended up making a DVD called Lock ‘N’ Load. I think from that point on we knew we were a crew. A bunch of riders who’s main motivation was riding and filming street riding, we were all thinking on the same level and collectively riding towards the same goals; filming and searching for the newest stuff in Toronto. My involvement is simply that I was around the Toronto scene at the right time to fall in to being a part of what I feel was the biggest BMX movement to come out of the city.

What was the motivation to make this new video, after a hiatus for a few years?

There were a few reasons why I took control of this DVD project. It just seemed like the right time; I knew everyone who still gave a shit about filming had a full video part and I wanted to make sure it got out now instead of another few years. George (Carijutan) had an absurd amount of clips, I’m sure his part in this DVD is only half the clips he filmed over the past 3 years since the last DVD. I really wanted to make sure he got his footy out there so people could see the crazy ass shit he’s been doing in his mid 30’s. The last reason I really pushed to get this DVD done was because It marks our 5th DVD and 10 year’s as a crew from when we started to film for our first DVD. That’s why this video is called Five To Ten.

What can people expect with this new video? Who all will be in it?

People can expect what we’ve always done with our DVDs. The regular cast of characters, mainly street riding, poor video quality (haha), mix section with all of the ICC connect friends, and of course a little theme to go along with the video. Full parts from myself, Drifter Dave, Byron Lo, Pastafari, Ben Rinne, George Armani and a mix section with some ICC OG’s and our friends, as well as a Rexdale Trail section.

You are known for street riding, but people might not know that you have been riding at the Rexdale Trails for years now. Explain your involvement with those trails/crew, and will they be a part of this new video?

Rexdale Trails have been around since 1994, which is pretty crazy. Taro Saito first took me there in the fall of 2001. I still have a picture of me doing a tabletop that Rexdale Trail Boss Jimmy took of me that same day. I never think of myself as part of that crew, even though the Redale crew is some of the ICC guys. It’s hard to explain, maybe I just see that sort of thing different than most people. I got to the trail a few times a year and ride, I never really dig there. I get a lot of crap from the dudes cause I don’t dig often but we’re all such close friends it’s okay… I hope, haha.
With the Rexdale Trails crew being mostly ICC guys it just fits with making it a part of our DVDs. The videos are about showing everything we do as a crew from street riding, park riding, trail riding and everything in between and the people that are around us during those times.

ICC DVDs have been edited by different people almost each time. This is your first time putting the whole thing together. Explain your process for gathering everything and assembling this video, and what sort of challenges did you have?

Yeah, almost every DVD has been edited by someone different, I’ve always included myself in helping with the overall outcome of each video. So by fully taking on this project I knew what I was in for and knew how to get shit done. A lot of guys edited their own parts cause that’s the best way for a rider to show his riding and to have a proper feel of what he wants to represent with his section. It took about 6 months to get everyones footage/parts together, some guys had shit done in a month, some last minute. I basically made a private Facebook message group to get the main guys in the crew involved and know what was going on and to share the stages of their editing process with everyone. It was a great way to put the DVD together with everyone shit talking and pushing one another to get things rolling.

You launched a website in the late winter that catalogs and archives all the past ICC videos. Why do you think things like that are important for either the newer generation of riders, or older riders that may have been around and seen it when those videos came out?

I’ve always wanted to make an ICC website. This past winter just seemed like the right time and it was about time! It’s cool to have one place for people to go to to see what we are/were doing. I honestly made the website for the guys in the crew to go to to see everything and hopefully they appreciate it. I’ve got a lot out of BMX and I know I wouldn’t be where I am without ICC and my friends around me. I really just took all of this on to make sure I can give a little bit of that back to them. Everyone in the crew made Toronto and ICC what it is, I’m just a small part of that, so I needed to make sure people could go to one place to see us as a collective group. I think it’s cool when older and younger generation of riders know about the crew, it’s even more crazy when I travel and pros always talk about the ICC when Toronto is brought up.

As a 10 year project, this would be a milestone. People’s lives change in a lot of ways, and people evolve and mature and gain other responsibilities. Where do you see the ICC after this, or in another 10 years?

It’s crazy to think that it’s 10 years but in some sense it seems such short of a time. I wouldn’t change any of it for the world. I think the people who have known us for a long time and watch the DVD will be really stoked to see the timeline of riding we have gone through as a crew. This video showcases those changes really well. Who knows what the future will bring. I see a lot of changes if we have another DVD (which some of us have already been filming for). I see crazy comeback sections from some guys and I see a lot more dirt riding. Everyone is still motivated to film even though we’re all in our 30’s and 40’s, haha.

Any other info you want to drop, or thanks to give?

Hit up www.iccbmx.com to see what we’ve been doing through the years. Make sure to get out to the video premiere this Saturday June 14th at Dufferin Grove park, video should be on around 10-11pm. I speak for myself and I’m sure the whole crew when I say thanks to everyone that ever came out to one of our street jams in the past, came to a video premiere, bought a shirt or DVD, or even just held a camera or rode with us. Everyone we ride with is a part of ICC and what we do. We’ve always have done what we do because we’re a big dysfunctional family and we know the only way things will get done is if we stay close and stick it through.