Artifacts From The Albion Issue 2 By Nick Ferreira

15 May Artifacts From The Albion Issue 2 By Nick Ferreira 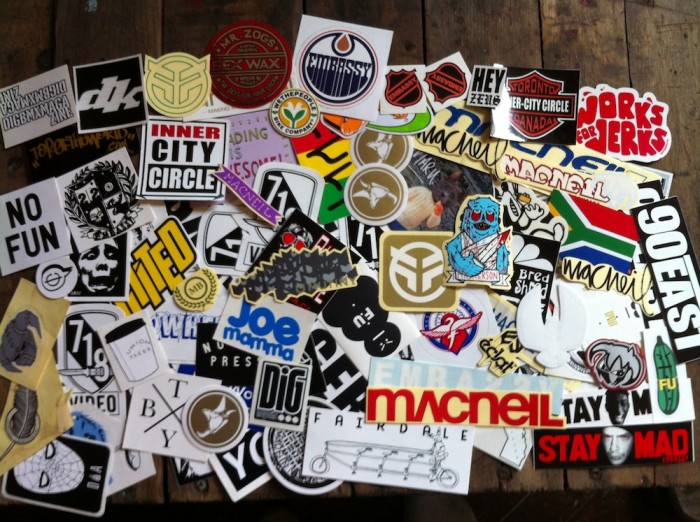 If you’re following us on Instagram you’ve probably seen me posting about stickers lately. They are an obsession that I still can’t shake, and nowadays I grow even fonder to old stickers that act as bookmarks to different periods of BMX in my life. I started writing a piece about this strange obsession and fascination with stickers almost two years ago for this site, then Nick Ferreira (of Holeshot Zine/Amigos/ESPN) wrote a very poignant and thoughtful piece about BMX’s appetite for stickers in The Albion Issue #2, and I thought why bother when he hit the nail on the head. The issue has been long available to view and read online here, but I just recently stumbled on the full article again and thought it would be a great time to share it. Read the first paragraph, then the rest of the article after the link. What’s your favourite sticker in your collection?

Collecting stickers, whether to save for the right moment, or cover your bike in an unrelated mess, is a BMX phenomenon that continues even in the increasingly digital landscape we live in. Kids typically plaster their bikes with any sticker, mid-schoolers have a Metal Bikes “Spade” logo they’ve been saving to put in the “perfect spot” for the past decade, and older guys still have that Club Homeboy sticker they’ve also been saving for two decades to place in that same elusive “perfect spot.” While these groups disagree about seat height, already-been-done tricks, and what company will go under next, one thing they can all agree on is stickers.

My sticker collecting followed the route that most take. First, I plastered my chrome DK in every imaginable sticker available. They went on as soon as they came in and it seemed as though my sticker hunger would never be satisfied. To keep up, I cut out letters from any vinyl bumper sticker I could get my hands on. Allowing the available letters to dictate what would become my “sticker”; most of the time it was complete nonsense.

Around this time I attended Woodward Camp. Not only is Woodward a mecca for ramps and riding bikes but it’s a great place to get free stickers. This was circa 1998, the heyday of those rainbow Primo stickers. To go along with my vast amount of stickers, I also picked up some bright yellow Peregrine pedals and when I returned my bike looked, well you picture it: a chrome DK, cantilever brakes, covered in rainbow Primo stickers topped off with bright yellow pedals.

Eventually I grew out of the plastered phase and took a more “tasteful” approach and started only placing one or two stickers on at a time. The silver foil Hot Water Music sticker I got at Warped Tour was a perfect match for my Terrible One Progression. That stayed on for a long time until I sort of went full circle and began to plaster my bike with stickers again. This time around though, I was a little more selective. I wanted stickers other BMXers wouldn’t have. I got Murphy’s Law stickers from flea markets, the Dig Magazine “sprocket” logo (for some reason these were elusive), and even made my own decals like when I was in seventh grade. Only now I used Letraset letters.

By and far the stickers that had the most influence on me date back to the first BMX Plus! I ever laid eyes on. This magazine featured an advertisement of an order form for stickers by a company called Stick Em Up. That ad, unbeknownst to me at the time, would become a source of inspiration for years to come.

Stick Em Up Stickers is a family owned and operated business. Started in 1971, Stick Em Up is located in the Bay Area city of Pleasanton, California. They specialize in BMX, Motorcycle, Humor, Flames, Skulls, and much more. Basically, they sell stickers like Calvin from Calvin and Hobbes pissing on a Ford logo, “This bike eats Huffys and pukes Murrays”, and various bootleg relics from the 1990’s. Their advertisements were simple; a quarter page that had tiny images of each sticker that you could circle and cut along the convenient dotted line and mail in with the correct total with a money order. I distinctly remember my first order. It included a “Is that your face or did your neck throw up?”, a bootleg GT “Wings”, and, much to the chagrin of my parents, “School sucks, I’m going BMX Racing.” I took the sticker obsessed eleven year old route and promptly stuck them on either my Robinson Rebel or homemade number plate (thanks Dad!)

Not too long after my first purchase, I bought another one that read, “I Really Really Really DON’T CARE.” Of course, it was a bit of a false identity for me; I did care about most things. I was a decent student, nice to my parents, and was just about the opposite of a disaffected youth as you could get. Except one thing, everything besides BMX really was just noise. I played the part but as I grew up it became clear that BMX reigned supreme. Work schedules were based around what days skateparks let bikes in, school vacations were a waste if BMX wasn’t involved, and when not riding, my friends and I watched BMX videos and discussed BMX. The story is familiar, but it’s true, I didn’t care about anything but BMX.

And, more than a decade later, the idea behind this sticker is still inspiring. I still play the part and like most, have a lot more responsibilities. There’s school, work, friends, family, rent, car problems, etc. that constantly swirl in my head. It’s incredible how easy it is to forget but, after a particularly stressful day, or month, with no actual BMX riding, I am reminded that I really really really don’t care about anything but BMX.

By Nick Ferreira
originally published in The Albion Issue 2