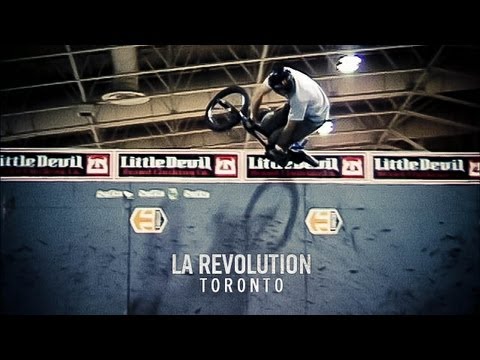 Posted at 00:16h in ARCHIVE by Jeremy Deme

With the first weekend of March quickly approaching I figured what better time to repost the La Revolution video. La Revolution was the first real BMX contest I ever saw in person and it seriously feels like it went down last year. La Rev set the tone for what would be the amazing Metro Jam era. It’s hard to believe it’s already been over 10 years since.

I remember making the trip to Toronto from Montreal with Eric Trepanier, not knowing much about the contest except that Eric was going up and we had a ride with his parents. The drive up ended up being around 10 hours instead of 5/6, there was a huge car pile up on the 401. When I got to the contest I realized that every single pro that I looked up to at that time was there and shredding. I met my favorite rider, Garrett Byrnes, we met/talked with Jim Cielencki after he pulled something I couldn’t even imagine possible until that weekend, the 180 handplant over the spine. Needless to say the La Revolution weekend was a monumental moment in BMX for me. Although I had already been riding for a few years at that point, there was no chance in hell I would ever be giving it up after seeing so much awesomeness/ good people and good riding 6 hours from where I grew up. I’m sure the same could be said for those who attended Metro Jams in Vancouver and even Street Justice contests in Alberta.

Although it was a contest, there wasn’t a competitive vibe in the air, and you could tell every dude there was having a good time with friends and enjoying the TO nightlife. BMX, and specifically BMX in Canada, needs an event or events like La Revolution/Metro today. With rider numbers at an all time high in Canada, young riders need to see an event like this at least once in their lifetime, in my opinion. Although current Toronto BMX Jams aren’t the same as Metro Jams once we’re, a big thanks goes out to Mike Heaton for putting on Canada’s largest BMX event year after year. If your anywhere around the GTA on March 1st to 3rd get out to the Toronto BMX Jam . Shout out to anyone, any shop or any organization who have held or hold BMX events in Canada!