Let’s talk about Dave Osato. If there ever was a guy who was ahead of his time, it was Osato. Dave came from a generation of ramp riders with front brakes and full pads, but his influence had much wider scope than that. I’d be willing to bet that most people don’t even think about some of the ways he’s pushed different aspects of riding, so I’ve scoured Youtube for some poorly compressed old footage and compiled a simple list. 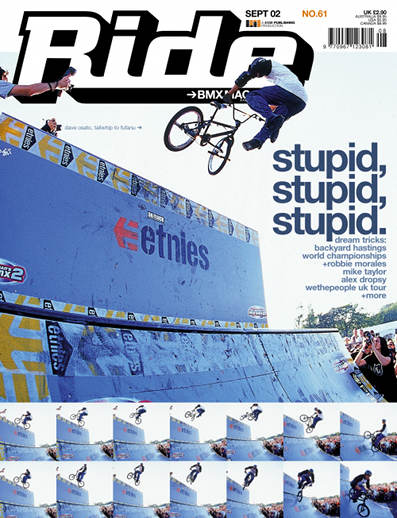 Dave Osato was the first person to tailwhip out of a manual, he was one of the first to take hop whips down stair sets. Before Stevie Churchill was doing 3 whips down large stair sets (or attending middle school), Osato did a bunnyhop 3 whip into a bank at Metro Jam. Dave Osato did a tailwhip out of a feeble grind twelve Roadfools ago. All of these things are easy to forget, because none of them became common until Osato had already moved on to other tricks.

Harry Main and Mark Webb have made a game out of trying to one up each other with ridiculous tricks in and out of nosepicks. Osato was doing barspins into nosepicks in the ’90s. He did a tailwhip into one in 2003. He did a tailwhip to nosepick whip in an old Hevil trailer shortly after that and if I’m not mistaken, he did a double whip to tailtap about the same time. When opposite tricks weren’t much of a thing, Osato did an opposite 3 whip over a spine.

Beyond these two overarching areas of influence, Osato has continually managed to do impossible tricks that don’t even make sense, like whatever’s going on in the video below (note the stage of the Tenpack warehouse for time period).

Dave Osato also did the greatest nosepick of all time.

7 thoughts on “An Ode to Dave Osato”