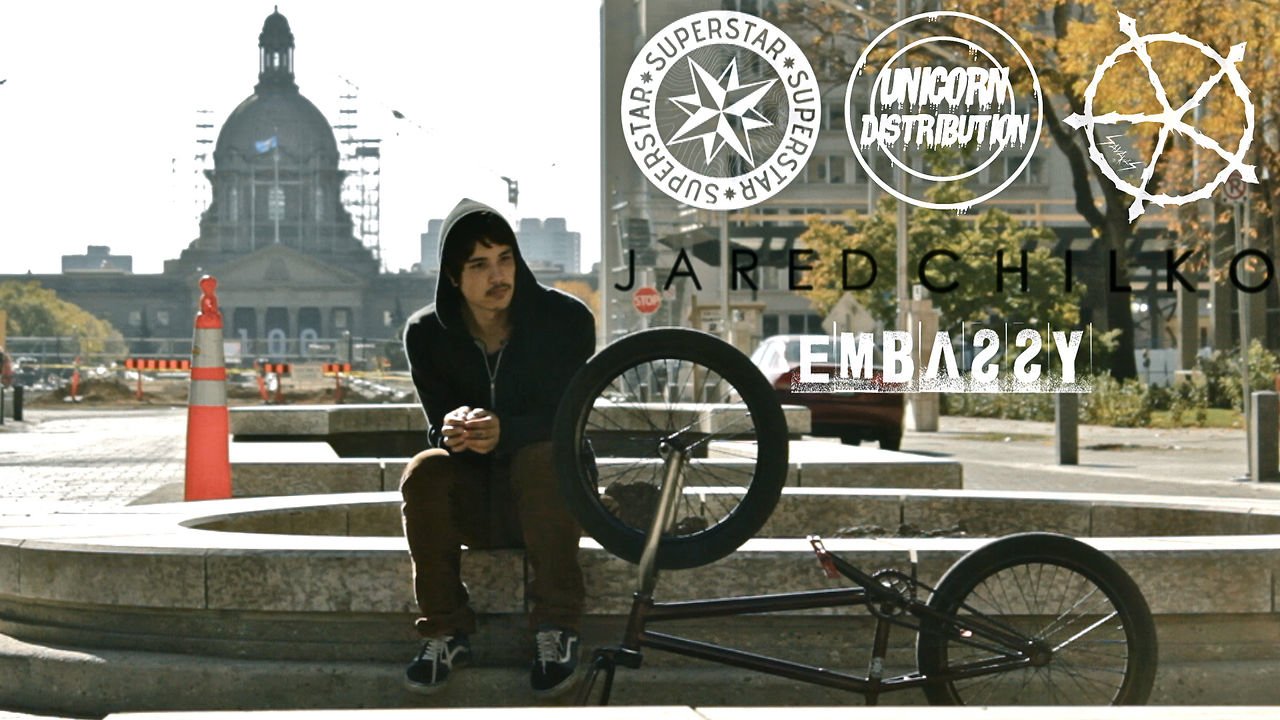 Posted at 23:06h in ARCHIVE by Jeremy Deme

Jared Chilko is a Canadian shredder who’s been killing it for nearly a decade. Being the awesome guy he is, he hooked us up with this awesome fall edit and interview. From Fit to Seshin to Superstar, chipping teeth on falafels, tattoos, quality over quantity, and a bunch more JJ shares a bunch with us. Watch the edit below and read on for the full interview.

Not much, chillin’ after a long day.

Pumped on this web edit you just dropped?

Yeah, I mean there’re always things you wish you did, spots you could of hit or got kicked out of. You know how it is.

It’s been good man,  lot’s changed for me this year, some for the better, some for the worse, but I just rolled with it. I got to ride a ton, met a bunch of new people, and tried to just chill out as much as possible. Low stress.

Stoked for the winter hibernation?

Fuck no! Winter in Edmonton blows! Our indoor parks got closed down a few years back so you have to make the best of parking garages and warehouse setups. The building I live in has a massive heated parking garage with banks and a few fun things to ride. I thinks that’s how I keep from going crazy. I also have a few trips planned this winter so that’s a bonus.

Where did the nickname JJ come from? I don’t understand how JJ fits with Jared Chilko haha

My name is Jared James Chilko. I think that answers this one, haha. 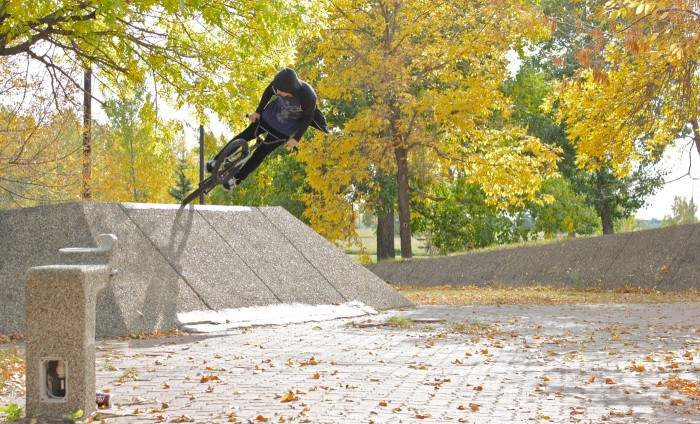 How did you chip your tooth on a Falafel? (Jaumell)

Oh man, that was years ago when I was way too drunk, way too often. It’s a bit of a haze but I’m pretty sure we all got done drinking somewhere on Whyte Ave, I had the munchies super bad so I was chewing sideways, somehow broke it taking a bite out of a Falafel. Jamuell probably remembers better than I do.

How was your trip to Europe this past year, some of the spots seemed unreal?

Yeah, I was pretty much in awe the entire time. Pierre Blondel (Superstar™) had a whole wild trip mapped out from Paris to the Spanish coast. Vince Perraud was also there for Ride UK/Soul and both those guys knew of so many insane spots. There were natural transitions everywhere and no word of a lie, we found a massive vert half pipe made of stone. The quarters were probably 15-20 feet high, and it was on the roof of a museum! The language barrier was a little tough but I met a bunch of really good people and got to see a culture that is pretty different than here in North America. (Check this)

Was that the first time you met/hung out with the Superstar dudes?

I had been in close contact with those guys via email and shit for a really long time prior, but yeah, it was the first time actually meeting them in person.

Superstar is a relatively small in North America. How did all that come about and how stoked are you to be a part of it?

So stoked! The owner Med loves bikes in general and gives me a lot of input into product design, which is something I really appreciate. Pierre, our team manager is an awesome guy who is super dialled at so many different things involving the company, kills it on a bike too. All in all, I am pumped on the product, the team, and the guys behind it. Plus the trips are too sick. It’s a no brainer. 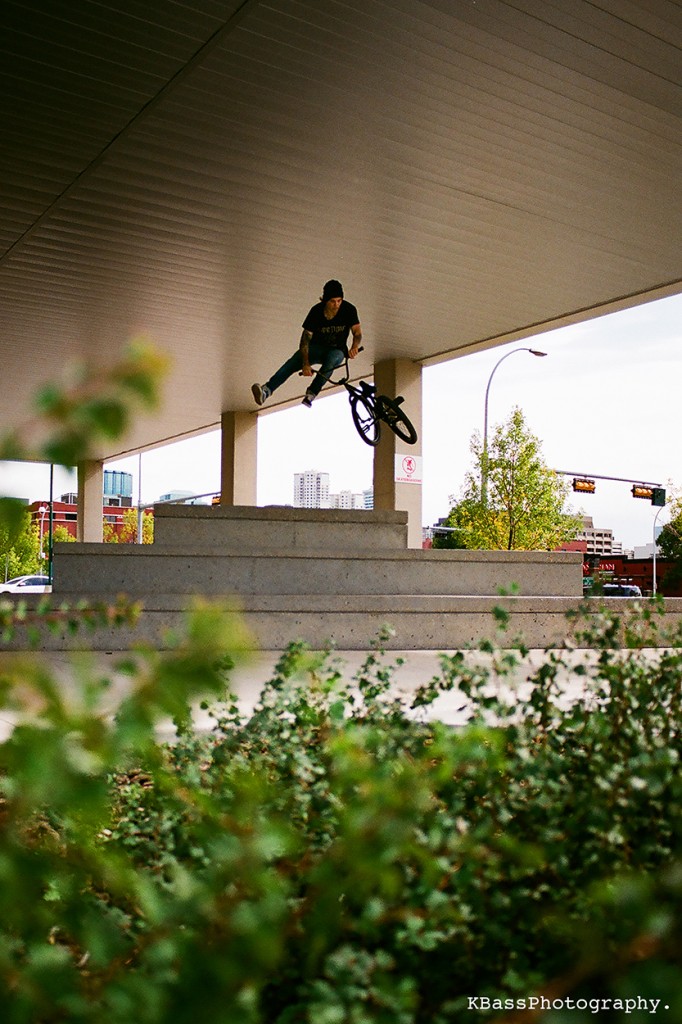 How is working for 1664 after having quit Fit many moons ago?

It’s not awkward at all. Bernie and everyone at work are really close knit and we are all kind of pushing toward a common goal, trying to grow BMX in Canada. It’s a job in the BMX industry, so I’m pretty fortunate for that.

What exactly happened with you, Fit and the move to Seshin? (note: it was a rad move of you to move towards a Canadian brand from a bigger international brand)

Thanks. It had nothing to do with Fit or 1664, both were great to be a part of.  Bernie and Robbie were both relaxed about the whole thing and handled it pretty professionally. It was bit awkward at the Summer of Fit premiere, but nothing too crazy. The whole thing came about pretty out of the blue. “Freak” (Seshin™) was living in Edmonton for a while, and asked me to be on the team. I was really interested in having more of a direct influence into the brand I was riding for, and was really down for something Canadian based. Ted was making good, affordable product which got and kept more kids in BMX. Matthew Walser, a really good friend of mine was also asked to be on the team, so it made the decision a little bit easier. I made a choice and stuck with it.

I rode your signature Seshin bars for a bit, they were dope. When are you going have some signature Superstar swag?

Ha, thanks for the support! Nothing too crazy in the works just yet, but I have a few ideas that might pan out.

You went to university, right? What did you graduate in? Do you figure you’ll ever move back towards that degree career wise?

I’m actually about 85% finished my degree and I probably won’t be finishing anytime soon. It was a health and social major at the U of A. I rushed into all that shit not really knowing what to expect. Life went in another direction and I have absolutely no regrets dropping out.

What can you tell people who would like to work in the BMX industry?

It’s a job like any other, the upside is you’re trying to benefit BMX. It’s not slack, you have to get shit done, but at the end of the day you’re in to what’s being accomplished. That’s how I see it anyway. 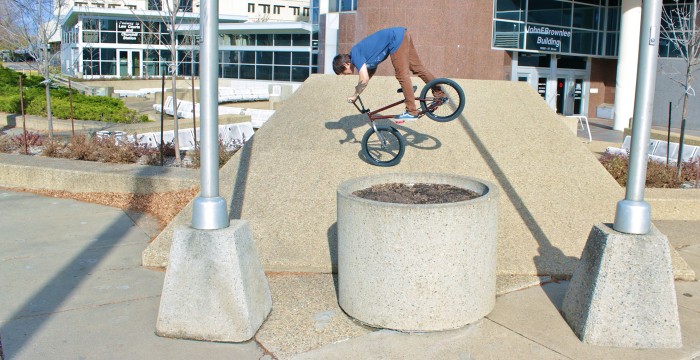 How’s the Edmonton scene these days?

It’s not how it used to be that’s for sure. Every skatepark has it’s own group of kids that stick together and don’t really venture out of their areas. It’s cool those groups are so tight but there isn’t a big collective scene here anymore. There are tons of parks and some good street, so lots of people are progressing really fast, which is sick.

Who do you normally ride with?

It depends on when and where I’m riding so it’s all over the place. I rode a lot with Cody Sisler this summer, Sean Tiffin, a lot of the O.G guys here, Mike Boag, Jaumell Campbell, Chaunch, Luke Santucci, Matt Walser. A lot of my friends skate so I cruise with them every so often. They know of so many good street setups that I think a lot of bmx riders over look.

Do you ride park or street more?

Since moving to downtown Edmonton a couple years ago I probably ride street over 80% of the time. It’s sick to just walk out your front door and be right in the middle of everything. I’m really into cruising the city looking for new spots, or getting a new take on old spots. I just got burned out on the majority of parks here.

You seem to have moved from quantity to quality over the years edit wise. When did you decide to be a lot more careful about what you put out there and why?

Now a days I only want to put shit out that I’m stoked on or like the vibe of. The internet is constantly getting flooded with videos so I figure why not wait until I got something together that I hope is worth while putting out there. I don’t like rushing things anymore. I started filming for a DVD part, which is definitely something I want to be 100% happy with. I wish more companies/crews focused more on getting DVDs out there again. It seems like a dying concept. I was so stoked on Embajada, and I’m excited to see the Markit, and Deadline DVD’s.

Have you always lived in Edmonton?

Best and worst parts about Edmonton/Alberta?

1 footed euro at a crazy spot

What’s your favourite trend and most hated trend in BMX right now?

Favorite would be how much better the filming and editing of BMX videos are getting. BMX is going in a nice direction toward the skate industry. Least favourite would be all the internet drama.

How many Tattoos do you have? (Jaumell)

Too many. Traditional and neo-traditional art is amazing. Check out Steve Byrne or Chad Koeplinger if you’re into it.

To just keep doing what I’m doing, travel as much as I can, and make the most out of every opportunity. 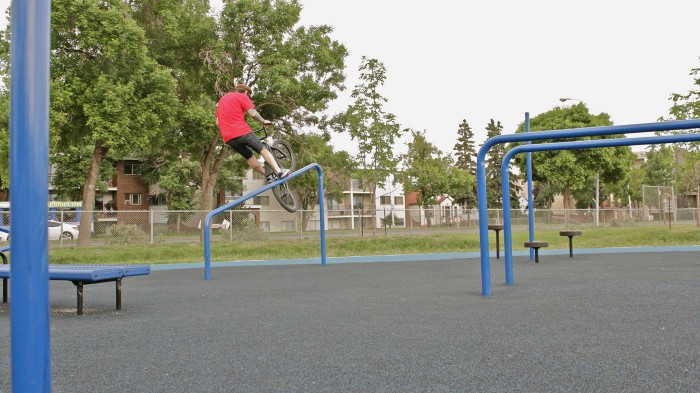 Last words or thanks?

I’d like to thank my girl Amanda for doing all she does for me. Pierre and Med at Superstar, Arnaud at Unicorn Distro, James at Savakas, all my homies, and you Jeremy, Prashant, and everyone else at Embassy for doing this interview with me. Cheers.

From everyone here at the Embassy we really appreciate you doing this and hooking up content this past year, we created this site to see bmx across the country and it means a lot when pros like yourself are actually helping us out. Thanks a ton bro. 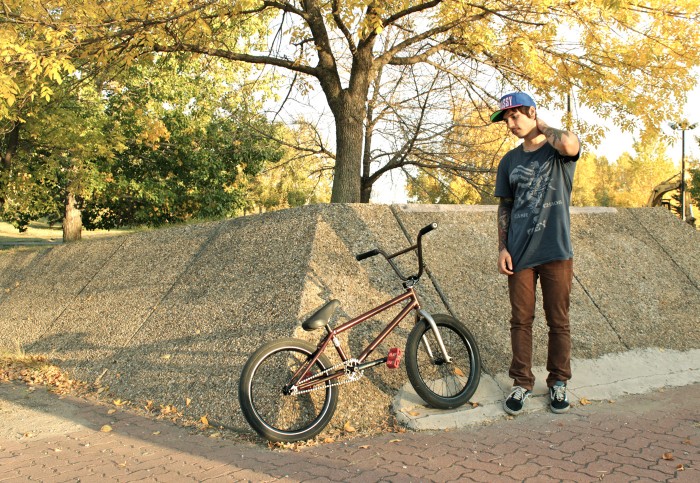