Posted at 00:05h in ARCHIVE by Jeremy Deme 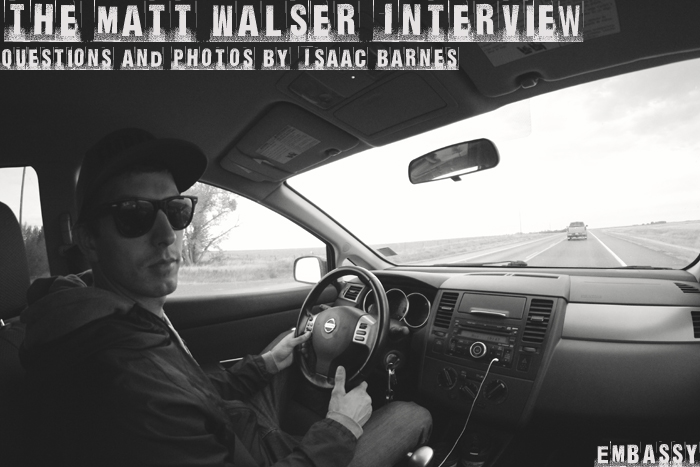 Matt Walser is rad dude who shreds hard on a bike. Isaac Barnes put together this dope interview of Matt for the EMBASSY. Matt’s one of the most under the radar shredders in Canada, read on. 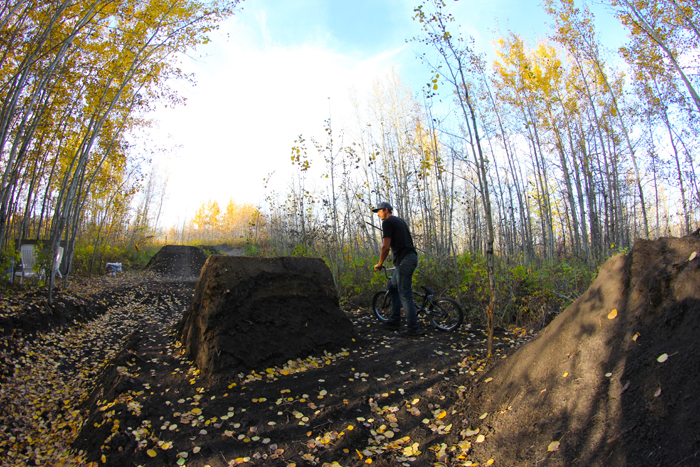 You’re one of the most, if not the most dialed riders I have had the pleasure of riding with. How long have you been at it, and what motivates you to ride the way you do?

That means a lot to me coming from you dude! I began racing at 3, eventually progressing to dirt jumping when I got older. I’ve always been motivated by my brother growing up. He bought every bmx video and magazine that he could get his hands on. When I got a bit older I met Mike Orita in the middle of the night at the skatepark and from that day on we’ve been riding together. He basically taught me how to fix and ride my bike. Michael and my brother Adam also gave me all their old parts, which is why I still have a brake and straight wheels. It feels like my entire life has revolved around riding bike.

You seem to be able to ride any terrain just as good as the next. What is your favourite type of riding?

My favourite part about biking riding is going faster and higher. I think you can pretty much make that work for any style. I really enjoy a good session on anything though, just interacting with friends and pushing each other. 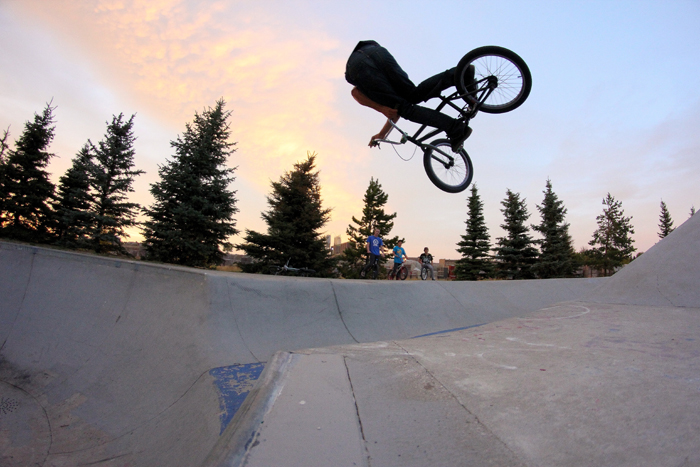 What type of riding do you enjoy watching the most?

I really enjoy watching riders I grew up with and anyone who is getting awesome. If someone is pushing their limits and having fun I’m into it. Honestly though I like watching anything in SLOOOOW Motion.

You are from Lethbridge, and have lived in Edmonton for a while. Why Edmonton, and do you have any plans of calling somewhere else home any time soon?

I still have a problem with telling people Lethbridge is my home. I moved to Edmonton in 2006 with my brother and his girlfriend. Work and friends have kept me here. I have only ever lived in Alberta, I think living in Vancouver would be wicked but that won’t be happening anytime soon. 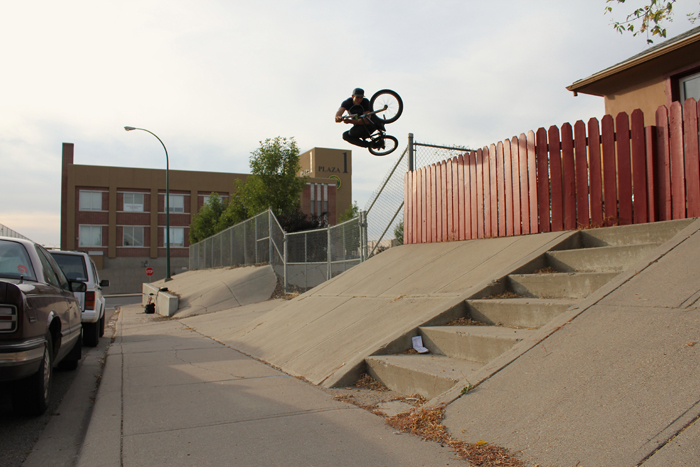 You’re one of the most healthy, physically fit, and motivated people I know. What was it that triggered this in you, and keeps you motivated to stay healthy?

I haven’t always been into trying to live a healthy lifestyle, but a few years ago I decided to learn more about it and got pretty obsessed. I go to the gym daily and run a lot and it’s pretty easy to stay motivated though because it feels good. Eating a cheese burger feels about the same as a hangover to me. Also it has made the transition from long winter to bike riding a whole lot smoother. 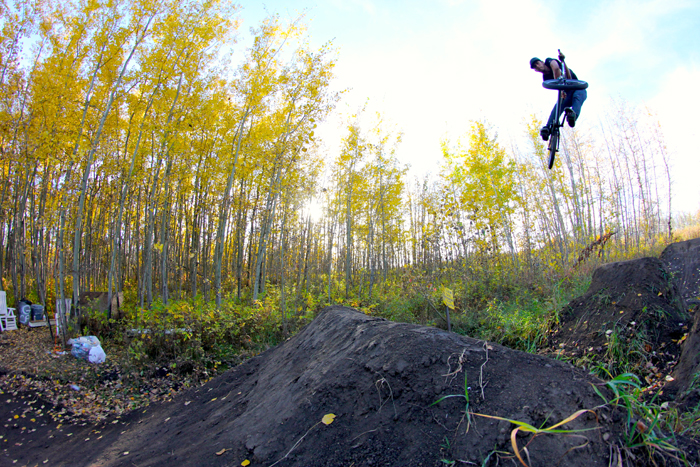 Something people might not know about you is how musically talented you are. How long have you been making music, and what instruments do you play?

I’ve been making music just as long as I’ve been riding bike. I’ll play pretty much any instrument I can get my hands on, but I am a drummer at heart.

You used to play in some bands, why did you stop? And do you have any desires to move forward with the music you make currently?

Scrap Metal is on hiatus for now, but I still play occasionally with some friends, but I have a tendency to devote all my time to only one obsession and that is bike riding in the summer. I would love for something to happen with my music, but at the end of the day, my music is an outlet for me, I make my music for me. 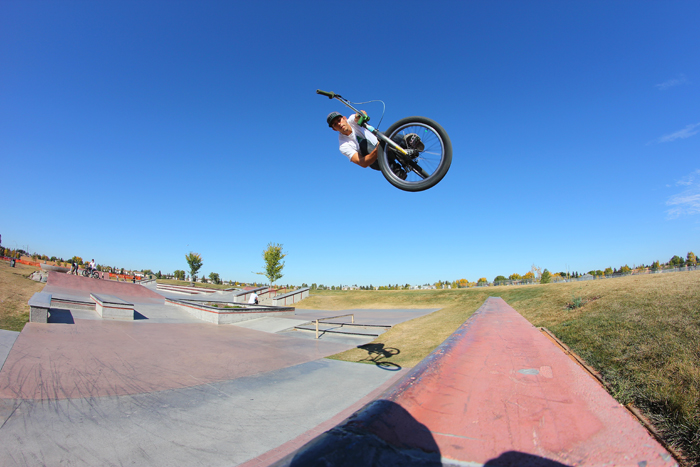 You have gone through some of the worst injuries you have gotten from riding this year. Care to share with everyone the stories?

Riding bikes with Jared in June, on our way to Tim Horton’s at lunch after a long rainy weekend, I miscalculated the angle of a rail, I caught my back tire on a rail hop and did a scorpion on my face into the concrete. Dislocated my shoulder in September at the trails without crashing even…

Have these injuries made you look at things differently at all? They don’t seem to have slowed you down at all..

They are a reminder to think things through, to follow my initial instinct, if I have a bad feeling, there is probably good reason for it. 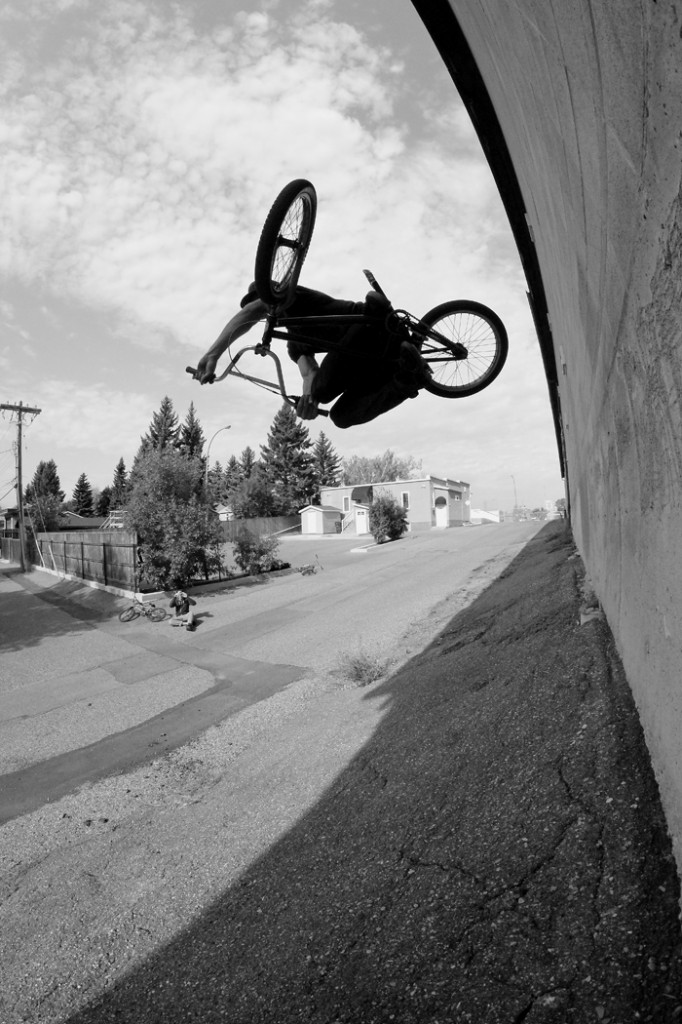 You used to ride for Seshin Bikes, and don’t seem to have any interest in being hooked up with anything these days. Was here something then that changed your opinion on being a sponsored rider?

Seshin was rad and Ted helped me out big time. Ted was doing something I felt like I could stand behind and was proud to be a part of. It sometimes can seem like bike riding means nothing to kids unless they can tell everyone they ride for some company. Sea bass, the Seshin team manager at the time, heard my bike got stolen and got in touch with me. It was pretty amazing!

Despite not wanting to ride for any companies, you still seem more motivated that many sponsored riders in working on projects, and pushing yourself. Are you currently working on anything?

I’ve just been digging at the trails and getting clips of my friends to make a webvid for the end of the season. It also helps that I work at Wheel Works with a bunch great friends and all we talk about is BMX. 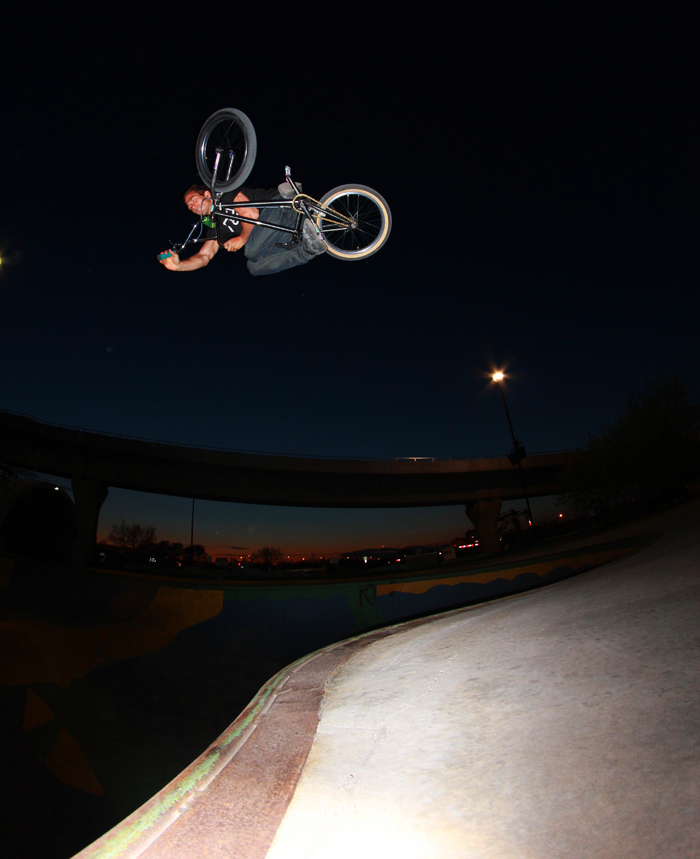 Who are some riders, and people that motivate/inspire you?

The winters are a bit of a bitch out here in Edmonton to say the least… What are your plans for staying sane this winter?

I plan to stay mad… until it thaws!