Posted at 11:43h in ARCHIVE by Northern Embassy 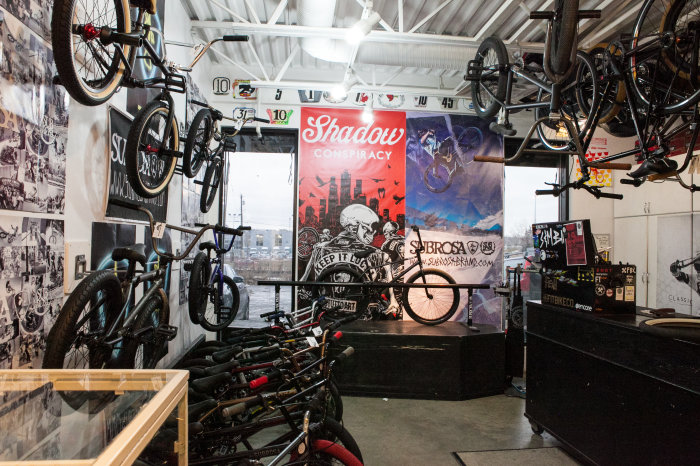 BMX Gallery 4130 opened up in Calgary, AB on April 1st, 2011. From that day on, the Calgary scene changed for the better, forever. Three Calgary shredders who have deep roots in BMX in Calgary, Alberta and Canada in general made it happen:

Brad Hannaford – Grew up in Calgary as a racer, went to the Worlds (1993?) a few times, and his Dad owned one of Canada’s first BMX shops “Dlite Cycle”. He was a racer, but always had a freestyle bike, and was riding street before we even had a park. Brad still races (ranked 3rd national for 30+ over) and rides a bunch street, park, etc. Brad deals with the payroll, and is BMX Gallery’s race specialist.

Devon Rohl – Grew up riding in Strathmore AB on his farm in 1992, started racing, and then got into the freestyle scene pretty quick. Has been living and riding in Calgary ever since. A great city, which he is proud to call his scene and home! Devon deals with book keeping, social media, and events.

Matt Thomas – Matt has been riding since he was a young teenager digging trails in the NE of Calgary. Shuv Trails (1996) was his baby. Matt shreds everything these days, still digs, and has an unreal indoor ramp in Strathmore AB called the #mattcave. He is the shop manager, and the one that deals with everything, and then some. He kills it.

When and why did you guys open up BMX Gallery 4130?
Brad: When? that’s a good one.
Devon: April 1, 2011
Matt: There was no jams, hard to find parts, everything was bunk.
Brad: Yea basically, I was tired of ordering stuff from the states all the time. No Shop to go too.
Devon: A city of a million people, you couldn’t buy any parts!
Matt: I remember I wanted a black chain and brake cable…couldn’t get one.
Brad: Haha! Good luck! Yea, so basically a hardcore lack of support for the BMX community, I guess.
Matt: Scene was dying. That’s about it.

What was the overall vision of the shop and what makes it unique?
Brad: I remember when the overall vision was that we were going to have a miniramp. Build the shop around a miniramp.
Devon: and that died…
Brad: Yup, that was quickly gone.
Devon: I just didn’t want a shop that was a messy jumblefuck of parts everywhere.
Brad: Yea I guess and it sorta took on the whole art gallery feel when we found the space that used to be an art gallery.
Devon: I just wanted all the brands to have their parts profiled together. You go into so many shops and all the sprockets are together in a pile, or stems, whatever. I felt like if we used brands marketing we could sell stuff better.
Matt: Yea, you could actually see how awesome some BMX (brands) stuff is, instead of a mess of plastic baggies.
Brad: for sure, or a pile of sprockets or something.

Why should riders support their local BMX shop?
Brad: Cause they need a place to change tubes
Matt: laughter… I’d say so they can have jams, parts, and a BMX scene. Before when there was no shop, everything was dying off.
Brad: not much going on without a shop.
Devon; And each shop that’s been around has done different stuff, but we really try to give back to the BMX community as much as we can.

Where did you guys buy your BMX parts growing up?
Matt: Dlite, B&P, Mission and Dans Comp.
Devon: all of the above.
Brad: Pretty much. I was on the B&P racing team for a while, and that was so bunk that my Dad just had to start up his own shop (Dlite Cycle). That pretty much sorted me.
Devon: Yup, I rode for Dlite, and Mission for a long time.
Brad: I bought some stuff from Mission in between the shop (dlite) and here. Not much. Didn’t seem like BMX was happening that hard at the time.
Devon: Oh yea, you had a 10 year Hiatus?
Brad: Maybe, yea.
Matt: 10 Year!?
Brad: Well I always had my bike, and always rode my bike. Just didn’t like go to the park or shit. I wasn’t into the scene.
Devon: year fair enough.
Brad: never not had a bike. Never sold my bike.
Devon:yea, to buy a car?
Brad: Yea, fuck that shit. I didn’t ride my bike to have girlfriends and stuff. To do sex n such hahaha! . 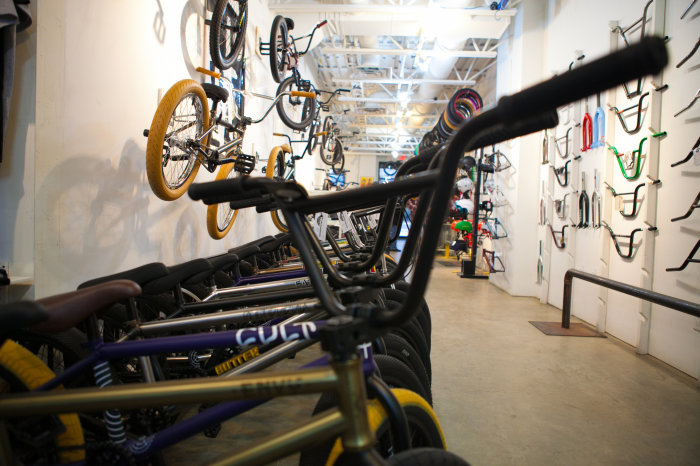 How many jams/ contests have you guys held since being open?
Matt: 36
Brad: 420
Matt: Been a few, random street jams, shop jams, parking lots
Brad: well if we count them back…
Devon: Get rad (Rad 25th anniversary),
Brad: Three Hills
Devon: Battle of Alberta
Brad; Did we do any Mills jams?
Devon: oh yea, the shop anniversary jams. Couple other ones. Back alley Jam.
Brad: Back alley jam was sweet.
Matt: Jams with 10Pack and the other one with the Shadow guys
Devon: Battle of Alberta, I don’t know there has been lots. There fun, brings everyone together.
Matt; Lets do another one.
Devon: Let’s do a Chinook Jam. A winter one. Like no date, but just put the word out ahead of a Chinook. Get people to ride street.
Brad: Pop up jam.
Matt: 120 Days till spring!
Devon: Hahaha! There will be like 5 jams by that time.
Brad: True. All the Red deer dudes say they go to Sylvan lake on Friday nights. Yea, or the two dudes at Matts.
Matt: go to #mattcave

What’s the raddest thing that’s happened at the shop since it’s been opened?
Matt: The Rad or Richard Gallant jumping the fence in the back
Brad: That’s what I was gonna say! Richard jumping ht efence from the grind boxes. Rad Jam was sweet, but it wasn’t…..
Devon: I just thought it was crazy that Eddie Fiola and all those dudes were in the shop buying shit.
Brad: that was crazy. And remember we put on the Cru Jones helmet and sat on all the museum BMX stuff?
Devon: Oh yea, they shipped it to us and we fired through all the boxes checkin it out we were so stoked.
Brad: it was Awesome. Hollywood mIke Miranda pink Hutch… That was awesome. Maybe that was the raddest thing?
Devon: I think the Richard Gap woulda been it, if he would have landed it.
Brad: Hahaha! That’s true. It was still Gnarly.
Devon: it was very Gnarly.

What’s the weirdest thing that’s happened since you guys have been open?
Matt: laughter.
Devon: I think it was when Matt was attacked by the drunk guy with the shoe.
Matt: Yea the shoe attack, or the drunk guy that stumbled in here on a busy day with a bag of blood, bouncing off the display cases. Or maybe the giant coiler left by our front door.
Brad: It’s awesome that it all happened to Matt. Laughter. 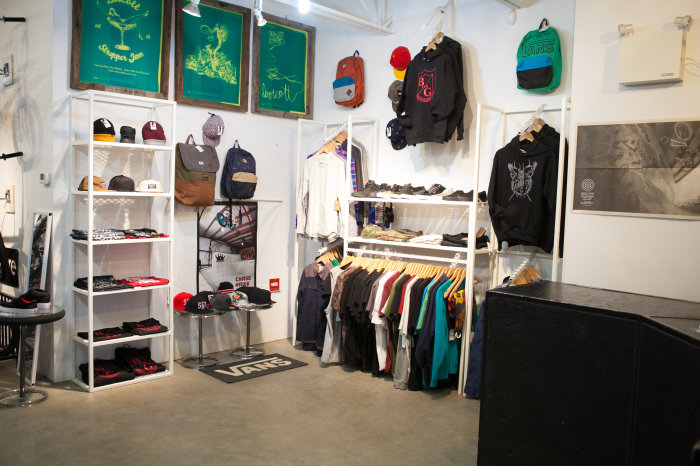 How’s the Calgary scene these days and how does it compare to a decade ago?
Matt: Oh snap.
Brad: a decade ago I didn’t even ride my bike.
Devon: the scene is strong these days.
Brad: Yea, I’d say the scene is super strong. Tons of young kids getting really good.
Devon: I feel like 10 years ago there was a huge drop. A lot of kids didn’t care about BMX. They skated. And now I feel like BMX is almost more popular then skating in Calgary.
Matt: Yea. there was a lot less freecoasters and plastic pegs rolling around. Now there is a lot more younger dudes.
Devon: 10 years ago felt like the 90’s.
Brad: yea, 10 years ago was the ashes of the 90’s.
Matt: there was still street and mills. Trails were good.
Devon: It’s true, it’s all the same shit. Nothing has changed terrain wise.
Matt: Nope. Same stuff to ride as ten years ago.
Devon: more people.
Brad: more people, more whips and bars. Laughter

What’s your opinions on BMX trends?
Matt: They’re amazing.
Brad: I love BMX
Devon: I feel like it’s an endless cycle.
Brad; we wouldn’t be in business if they didn’t exsist.
Matt: Trends definatley help out. Like the cassette to coaster to cassette to coaster. Type stuff. Keeping it different and keeping people trying different things.
Brad: Yea I think without people starting new stuff, trend setters, everything would just be same forever and that is just whack.
Matt: Bring back the chain wallets though!
Brad: Chain wallets. Laughter. And bash guards. Not like sprocket bash guards, I want ones that attach to the frame. Dave Volker type shit.

Do you have a message for rider’s who order their parts from US mailorders?
Matt: Goodbye Canadian BMX shops. Hello…..
Devon: I get when kids order the odd thing. I just hate it when they order everything, and then they come into the shop and want us to help them out with our tools, or show them how to put it on.
Brad: borrow the tools… I think they just have to look at it as, if everyone ordered there shit off dans, there would be no bike shop. Then where would you go to borrow tools, or watch a video or see parts? Meet your buddies… I don’t know, I’ve ordered shit from the states, but only when it’s a serious hassle to look for it here.

Final remarks or shout outs?
Devon: Thanks to all our awesome customers and all the BMXers in Canada!
Matt: Everyone that’s come by. The canadian distros. Cru Jones, Laurie Laughlin,
Brad: Laughter Laurie Laughlin didn’t come, she doesn’t get a shout out. But cru def does.
Devon: All the pros that have come through with the distros.
Brad: 1664, 10 Pack, Kill em all, Ryder, Vans, PBR for hooking us up with stuff for the events.
Devon: Embassy
Brad: Northern Embassy for keeping it real
Devon: All the team guys and draft picks. Matt for running the shop.
Brad: Matt ofr shop managing
Matt: all the crazy people for keeping it exciting.
Devon: shout out to BMX
Matt: Jay Miron, Basic Bikes
Brad: Laughter Did you see that flip book on Snakebike of Graham Pye?! That was sick. He was doing a turndown in kneepads and short shorts… that was awesome
Devon: Shout out to G Pye.Shout out to Ken Dowdle. That guy is awesome.

Matt: K all you kids in the shop shout out BMX MOFO!!
KIDS: BMX MOFO!!! 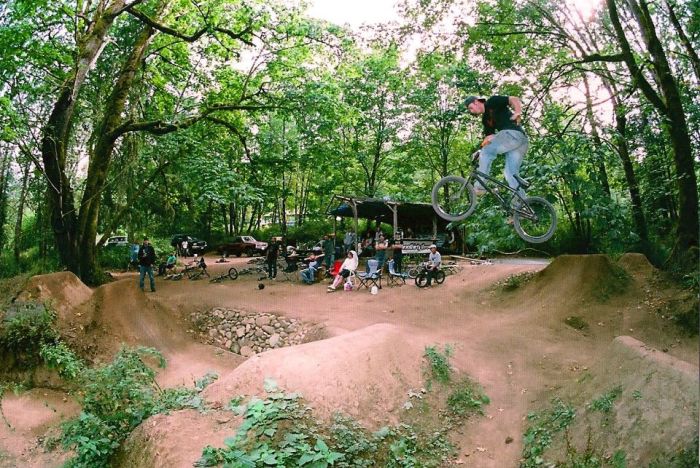 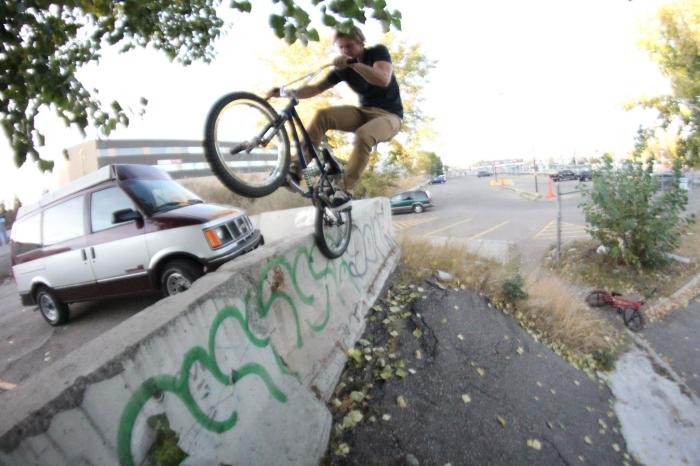 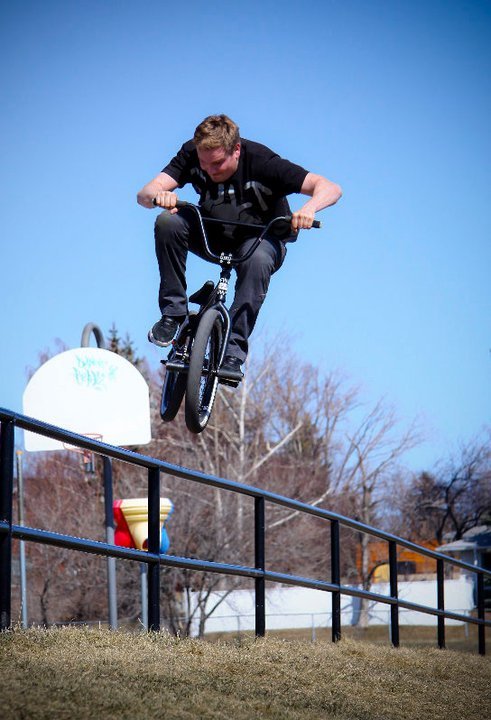 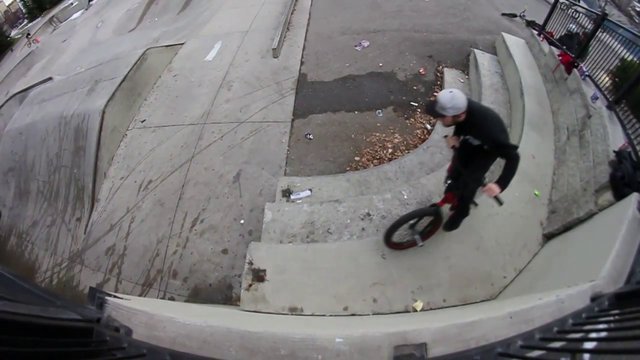 Posted at 23:01h in ARCHIVE by Jeremy Deme

Not much needs to be said about this besides it was filmed and edited by Austin Odegnal and features a bunch of rad Calgary,AB locals (Kyle Freeman, Richard Gallant, Matt Thomas, Andrew Schubert, John Alden, Darcy Peters, Brad Hannaford, Devon Rohl, Austin Odegnal, and Chay Nelson). It’s rad, press play! 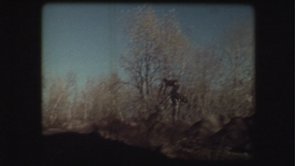 Posted at 12:09h in ARCHIVE by Jeremy Deme

Spotted this one this morning, some 16mm footage from the now plowed Chuck Bones trails in Calgary from years back. Featuring Calgary shredders Devon Rohl and Richard Gallant, 16mm bmx footage is rare but always dope, a soapbox production.

Posted at 10:33h in ARCHIVE by Jeremy Deme 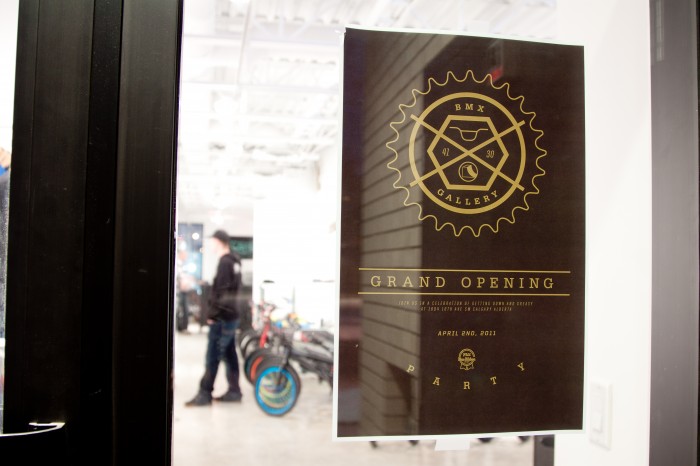 Devon Rohl has been a huge part of the bmx scene in Calgary and Canada for many years now. On April 2nd he held the grand opening of his new shop Bmx Gallery 4130 in Calgary. Devon hooked up some pics of the grand opening, read on.