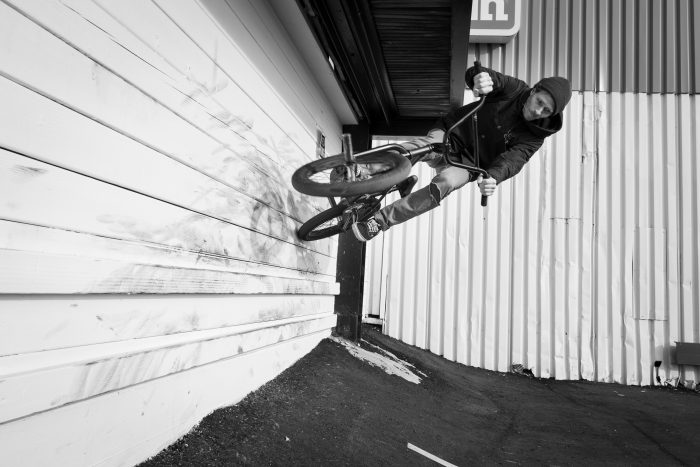 Harley is a dude who’s been in the Canadian scene for a minute, and his involvement in BMX goes way beyond leaving sick tire marks on walls around the Toronto area. Harley is an incredible artist whose work has been a quintessential part of some of the biggest brands out.

When you look across the BMX industry at the plethora of great companies, there seems to be a common point that they all strive for. Beyond making good products that can withstand abuse, brands need to offer something that helps individuals connect with them.

But what is it that attracts people to one brand over another? Take your go-to frame or parts manufacturer for example. You might like them because of the riders on the team and the videos that they release, but in my opinion, a very significant part of the appeal is an element that is a bit more subtle. A brand’s art direction can literally dictate its identity. The way that they design their frame stickers, their packaging, their video graphics, all these elements link together to create a sense of continuity that provides an overall sense of personality for the brand.

Being able to conceptualize this sense of personality is no easy feat, but Harley Haskett is always up for the challenge. Harley’s been in the game for a long time, and he has an extensive portfolio of amazing work to show for it. Read on to get a little insight into Harley’s background and how his creative process works.

Hey Harley. Thanks for taking the time to do this! I wanted to get in touch and kind of shine a light on some of the work you do within the industry. I guess as a jumping-off point, what kind of work do you do for BMX brands generally?

Thanks for hitting me up and asking me to do this, Joel! Hyped that NE is back at it these days. So yeah, I’ve been working in the BMX industry off and on since 2007 and am currently the creative director/graphic designer at Cinema. I also do some stuff for Blackout Distribution (the parent company of Kink/Cinema/Mission) and help out with Mission stuff every now and then.

I feel like when you step into the BMX industry, you can pretty easily get catapulted into several different directions. Do you think that was the case for you? What was your first industry-related gig? And how did you transition into what you do now?

Hell yeah man, that’s the truth. BMX is rooted in DIY shit and wearing a ton of different hats at all times is just how it goes. When I was growing up, I worked in a shop in my hometown wrenching on bikes and also doing a lot of the ordering, which is how I really got connected with people in the industry, especially the dudes at Ten Pack Distribution. One of my best friends and I also had a t-shirt company going for a bit called Syndicate that we did all the art for and screen printed ourselves. We had a loose team and put on events at our local skatepark every year, too.

I met all of the dudes at Ten Pack Distribution/MacNeil bikes at the Primo La Revolution contest in Toronto, right before they did the first Metro Jam out in Vancouver. My friend and I went out to Van for that first contest and helped the crew build the course. We ended up doing that for every single Metro Jam in both Toronto and Van. The last year of the Vancouver contest was right after I finished college and I went out there by myself and stayed a while after the event. I was making a plan to move out there the following month, but the last night I was there I hung out with Jay Miron and Chris Young, who was the graphic designer at Ten Pack and MacNeil at the time. Jay told me they were going to open up a Toronto warehouse for Ten Pack and that they wanted me to help get it up and running. That all happened in 2007. I moved to Toronto and helped get the warehouse set up and ran it myself for the first while, picking/packing/shipping orders. I also started taking over the graphic design role at Ten Pack after Chris moved on, in addition to being the team manager for the Ten Pack team. I did a bunch of event planning stuff as well when we did the Singapore Metro Jam, Red Bull Elevation (in Whistler and Mexico), and the Kingston Bike Festival (which was the last Metro Jam). We ended up getting more people involved in the warehouse. Jeremy Deme was the main sales dude, Prashant Gopal was the warehouse manager and more, and Chris Cadot took care of shipping and everything. That just left me with the graphic design and TM stuff for Ten Pack and also the design/direction for MacNeil after Harrison Boyce moved on.

In 2014, MacNeil was sold off and Ten Pack was more or less folded. I ended up working at a small agency here in Toronto for almost a year as a graphic designer before leaving that and focusing on more freelance work. Fast-forward to late 2016 and I get a call from my friend Dave Fortman—who was the creative director at Kink at the time—saying that Blackout had just purchased Cinema and they were looking to hire someone as the creative director for the brand. I knew all of the dudes at Kink/Blackout pretty well from Metro Jams, Ten Pack tours, and riding trips down to Rochester so it was a no-brainer for me. We got it all sorted and I started as the creative director/designer at Cinema in 2017 and have been doing that ever since, on top of any freelance work that comes up! Haha, damn, sorry for the novel!

Haha. No worries at all man! I think it’s fascinating how making connections in the industry can send you on so many different paths. Off the top of your head, could you list all of the BMX brands that you’ve worked with over the years?

I’ve only exclusively worked with Ten Pack Distribution, MacNeil Bikes, and now Cinema and Blackout Distribution. I also sometimes do some stuff for Mission BMX (usually catalog design), and have helped out with stuff at Kink every now and then. I’ve also shot photos for some ads for different brands over the years like éclat, Deft, and Wethepeople.

I was going through your site (harleyhaskett.com), and saw that you’ve done some work for a variety of organizations and brands outside of the industry. Do you find that occasionally stepping outside of BMX provides some benefits in terms of perspective or maybe some creative ideas?

I’d actually say that my work is probably 50/50 between BMX stuff and other projects. I juggle a good amount of freelance work as often as I can because—as you suggested—it offers up the chance to try new things and work with different people on projects that are completely different than BMX.

Are there any dream brands/companies out there (BMX or otherwise) that you’d love to work with one day?

Hmm, that’s a tough one. I don’t think I really have an answer for that, to be honest. Sometimes I work with really small clients on projects that end up being something I’m super proud of and kick start great relationships.

Sort of an unrelated question, but I’m going to ask it for my own curiosity, haha. You often travel with the Cinema team (arguably one of the most stacked squads out), and get to witness them do their thing firsthand. What are those trips like? What are some of the responsibilities you have on trips like that?

Man, being on those trips and seeing that crew throw down every single day is absolutely bat-shit crazy. The first trip I went on was the Washington, DC trip and that was the first one the crew had done in years. Every single one of those dudes is super chill and were really welcoming on that trip. They have all been fun to work with on signature products and other stuff ever since. Every day of that trip, and any trip I’ve been on, is nothing but good times. As far as responsibilities go, I mostly help Will film second angle stuff, shoot photos for apparel lookbooks and random content, and usually drive the van if we’re somewhere close enough to Rochester that I can roll with the Kink/Cinema van for the trip.

I’m always fascinated to find out where people draw inspiration from when they’re creating something. Do you have something in particular that inspires you when you’re working on new designs? Or is it just sitting down and scribbling away until something sticks?

It really depends on the project and whom it is I’m working with. A lot of the time the project itself inspires the direction you want to take it in. Sometimes you get a client that has a really specific vision and you have to work within that which can be a fun challenge. Other times, you get the opportunity to run off with whatever ideas you want. When I’m doing branding projects for people, I’ll have them send me visual inspiration and a list of words that they think describe their brand and what they want their logo/identity to convey. I’m also constantly inspired by friends of mine who are graphic designers, illustrators, or makers in general and the millions of other people out there making cool shit all the time.

Do you have a project you’ve worked on that stands out as your favorite or proudest?

I think that’s sort of a fleeting feeling for me, to be honest. There might be something in the moment, but then I’ll work on another project and it’ll be something totally different and way more satisfying in some way. It’s always really rewarding to get to see Cinema apparel and seat designs I’ve made out in the wild, when it’s the team dudes digging it or random people with the gear. The work I’ve done with Native Earth, an Indigenous theatre company here in Toronto, was always stuff I was proud of because they’re an amazing collective doing really great things in that realm. I did the album artwork/design for my friend’s band Talk Show Host a while back and I still get hyped every time I see it.

Awesome man, well I think that’s about all I’ve got. Anything you’d like to add or plug? Thanks for taking the time to do this I really appreciate it!

Shout out to everyone at NE for doing cool shit in Canadian BMX and highlighting the scene up here. Big thanks to everyone at Cinema and all the Kink/Blackout fam for the opportunities, Dave Fortman for originally hooking it all up, and to everyone I’ve ever met in BMX ever. This shit is the most fun and I feel really lucky to be involved in it the way I am and for any day I get to go out and pedal with the homies!