We’ve got a fresh exclusive video courtesy of Austin Odegnal and the 403CREW. With their local indoor, B-Line Bike Park in Calgary closed due to the Alberta COVID restrictions, the squad road tripped to Victoria and Vancouver for some outdoor riding back in March. They luckily timed their trip before the full travel restrictions came into effect in British Columbia. Check out the video above and read on for a quick interview with Austin and some of the crew. 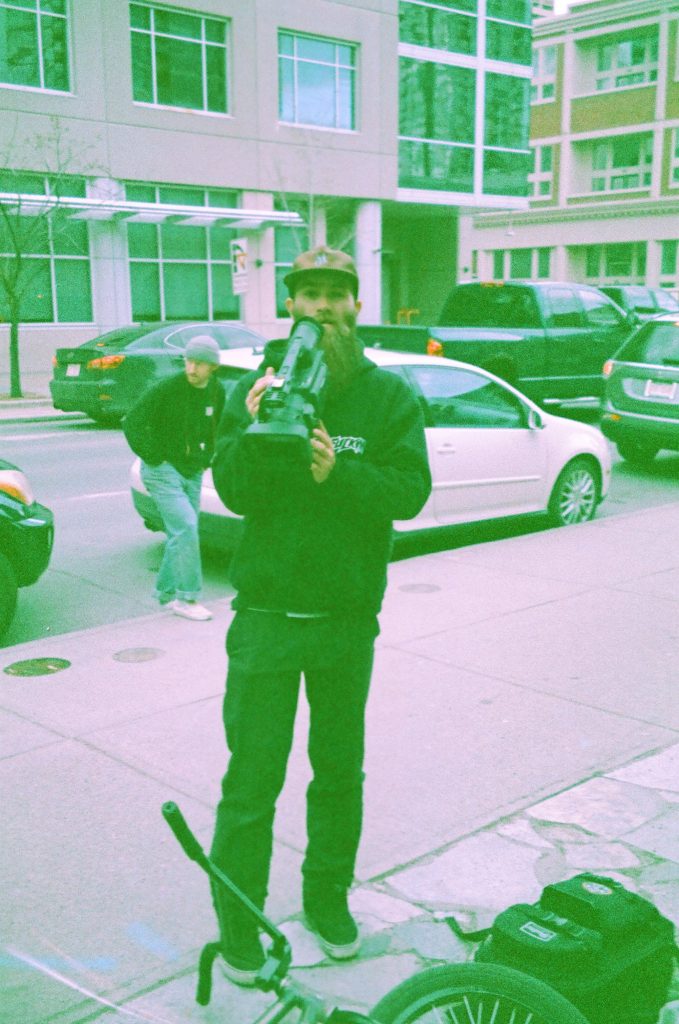 With B-Line being significantly affected by the COVID restrictions, what have you been up to in 2020 and early 2021?
Austin: I had been working at B-Line Indoor Bike Park since it was an empty warehouse and have been a painter since high school. I was lucky enough to stay working through most of the pandemic. Even when B-Line wasn’t open, I was kept busy with park repairs and maintenance. Almost all of my time outside work in 2020 and so far this year has been spent in the streets filming with everyone for various projects. I’m currently not working right now.

What’s the Calgary scene like these days? There seems to be a ton of young talent. I keep seeing new names pop up that I’ve never heard of before.
Austin: The Calgary scene has been popping off for a year or so now. There has been a steady stream of dudes moving to town lately and new spots seem to appear every other week. Birken Kirk, Connor Campbell, Dredon Tattrie, Jake Hubick, Jackson Hammel, Kaiman Stanjeck, Matt Macleod, Nathan Dowdle, and Steven Humeniuk are some of the kids that are killing it right now. It’s crazy to see the progression of their riding over the last few years. There’s still quite a few older dudes killing it on a regular basis too. 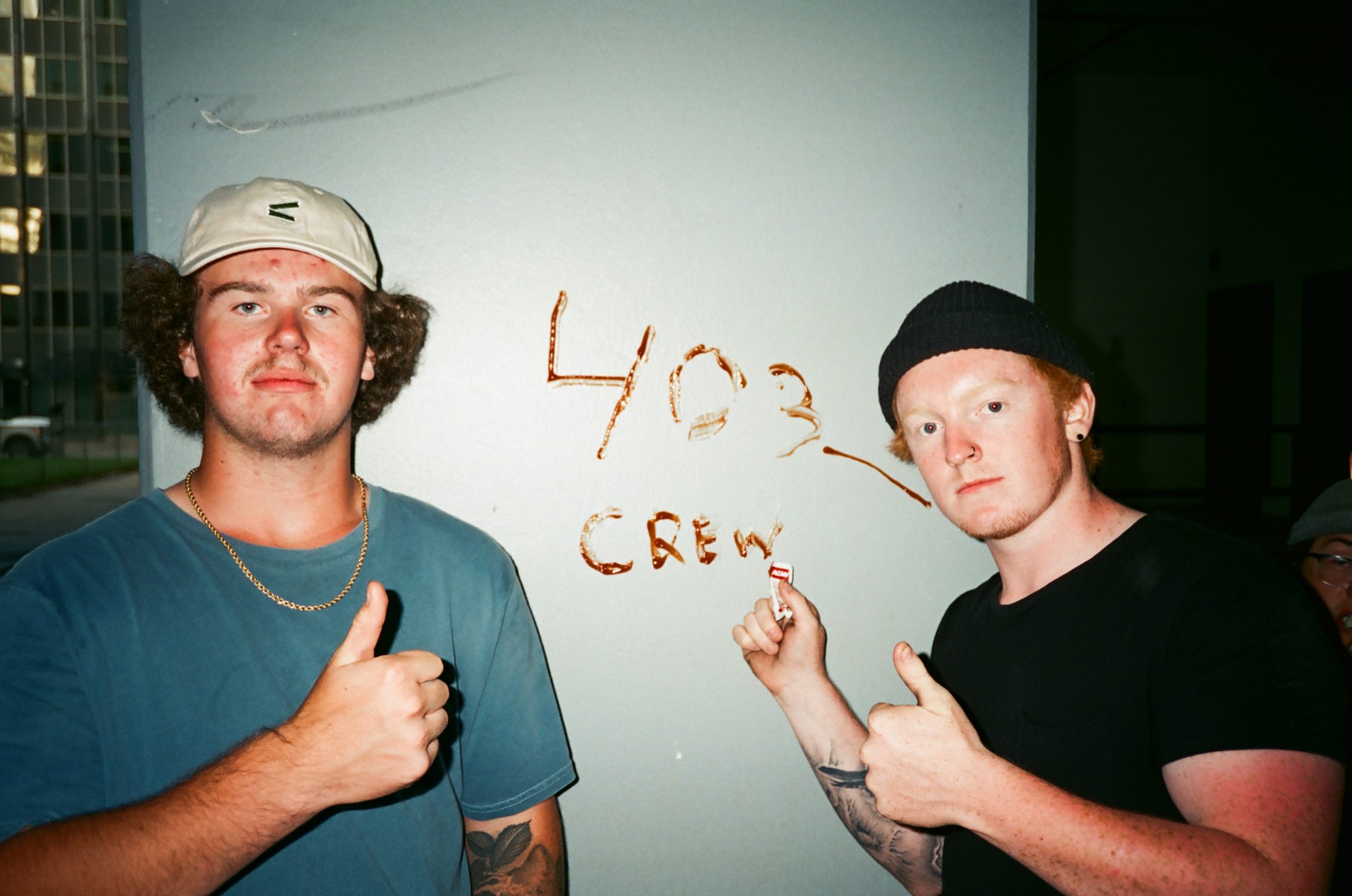 You were on quite a tear there putting out multiple edits for some of the young Calgary riders. Despite only being 31 years old, are you considered a “grandfather figure” for the Calgary scene?
Austin: Yeah, I guess you could say that. I have kind of embraced it at this point. It makes me feel younger a lot of the time, as weird as that sounds. In the summer of 2017,  I bought a VX and started trying to get a bunch of the local kids at Millz (Millenium skatepark) to leave the park once in a while and come ride street and film. It ended up working and I was able to make a solid edit over the next year or so. I switched back to an HD setup in 2019 and started stacking footage, hopeful to make some sort of full-length video. Everything basically snowballed from there with the amount of riders and their talent growing exponentially. The Calgary scene is well on its way to being as strong as ever and it’s awesome to be a part of it’s growth.

What’s the status of that full-length video?
Austin: I have wanted to make a full-length ever since I started riding and watching videos. Nothing has ever materialized until now. We have been stacking footage since the start of 2019. A few of the guys wanted their own edits; I agreed to do that if they would go in with me for a DVD project after. So the full-length is an ongoing project, but it is now my main focus. I’m hoping to finish sometime in the next 2 years. 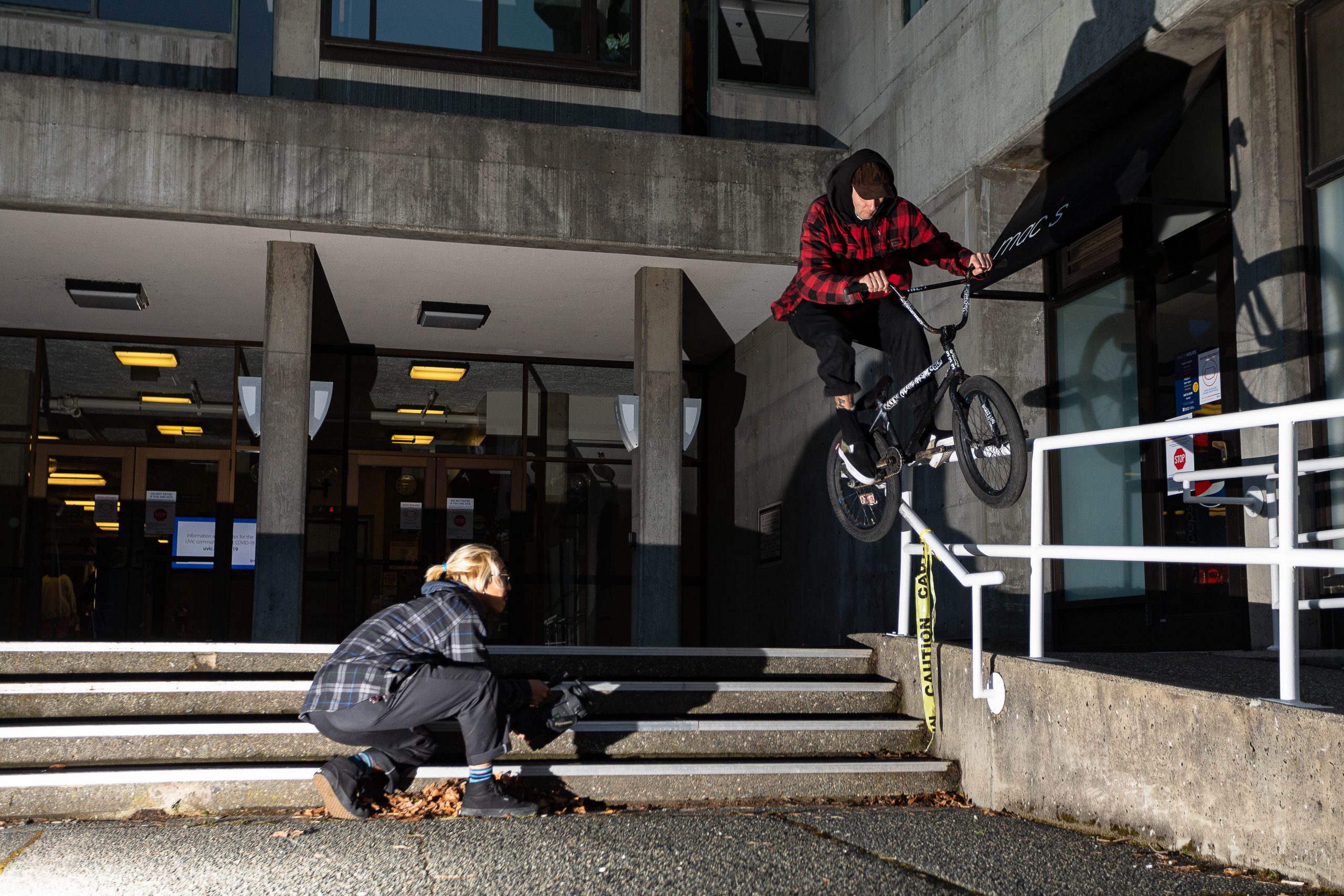 Let’s talk about this road trip. Did you drive or fly, and how did COVID affect your trip?
Austin: We drove out. There were seven of us split between two cars. We drove straight to Victoria from Calgary. Doing the trip during COVID was a little bit weird since we couldn’t hang out with everyone in town at once. A few security guards also hassled us for being from out of town, but nothing too crazy.

Do you have any memorable stories to share from the trip?
Austin: There are so many. One of those would be getting Taiga to shotgun his first beer in the liquor store parking lot. Then one night Birken decided to go get drunk at Cashmole with Steven and came back with a questionable tattoo in the middle of his forearm. We were offered lines of cocaine on a skateboard at Plaza late one night; that was interesting. The last night was easily the most memorable of the trip though with all of us hanging out and riding at a parkade spot. The party eventually spilled back to the Airbnb into the early morning hours. Some other stuff happened that night to make it extra memorable, but we’ll leave it at that. If you were there, you know. Haha. 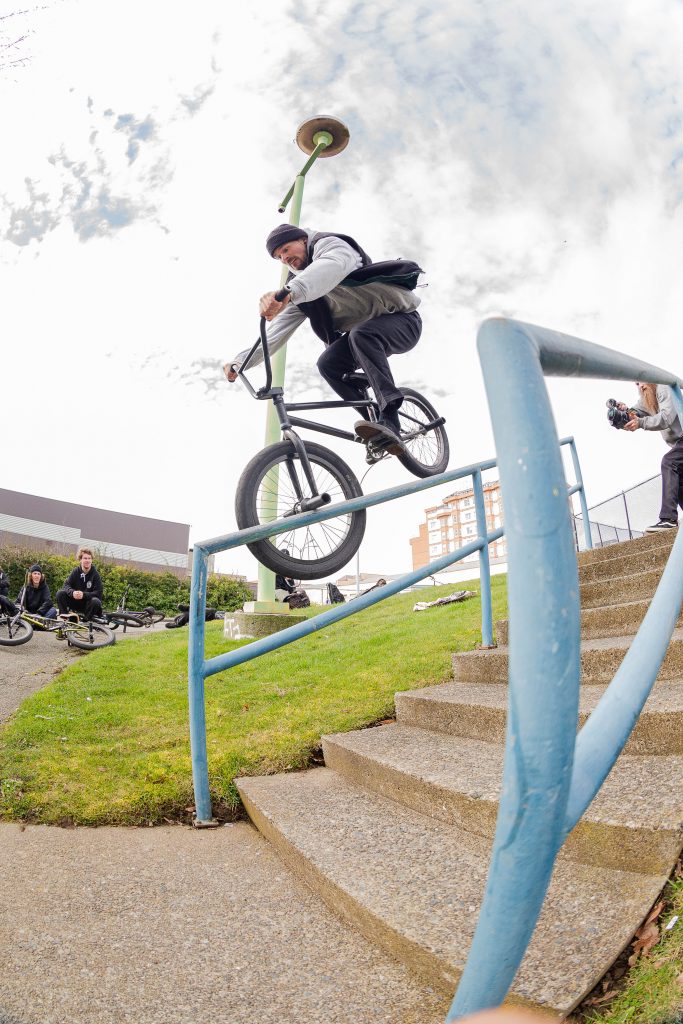 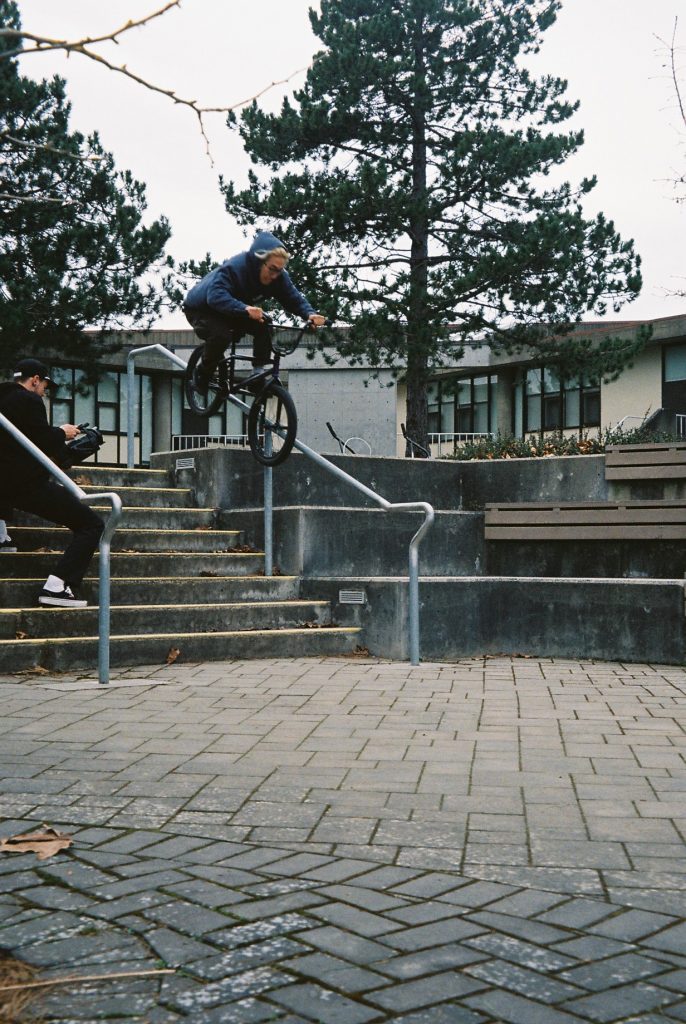 Was this the “very first BMX trip” (outside of Alberta) for any of the riders featured in the video?
Austin: Yes, it was the first BMX trip for Steven Humeniuk. Steven is one of the newer riders with our crew and we gave him the typical “new guy” hazing on the trip. He embraced the experience quite well and now he is one of the guys.

What was your first BMX road trip like? And how did that experience compare to your initial expectations?
Steven: I was really excited to go on this trip because it wasn’t just my first BMX road trip, but it was also the furthest I’ve been out west. The trip was definitely way more than I was expecting. I met lots of great people, rode lots of really sick spots, and filmed my first real camera clip. The trip was really amazing; not just the biking, but the whole vibe. I would definitely go on a trip again with these guys! 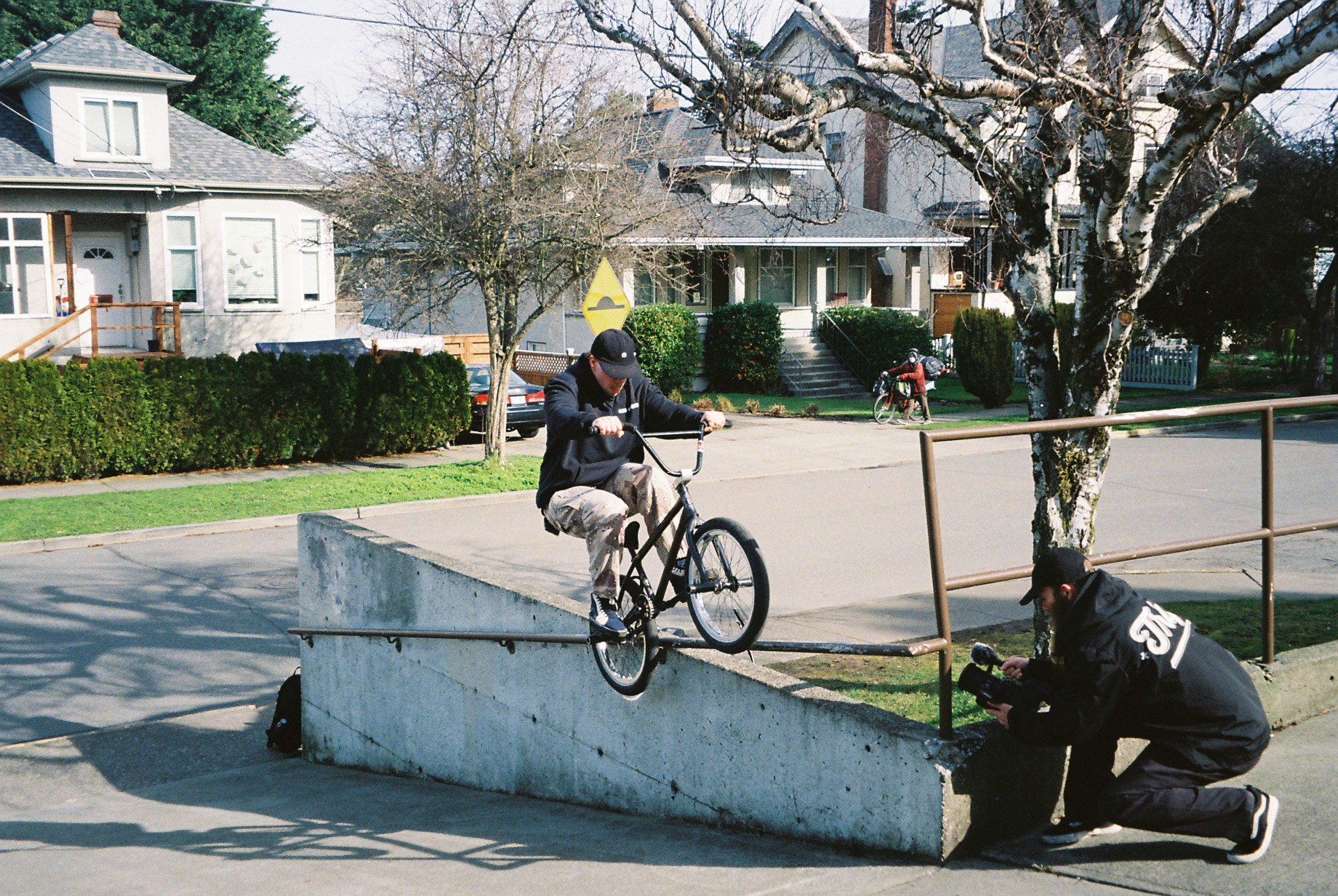 This trip was a send-off for your time in Canada. What brought you to Canada from Japan?
Taiga: First, thanks for giving me this opportunity. I’m Taiga. I had always longed to live in another country and wanted to learn English. My grandpa passed away when I was 24 which made me think “YOLO.” I felt like I don’t wanna regret anything in my life. So I decided to go to Canada.

What was your experience like living in Calgary?
Taiga: That was the best experience in my life. When I arrived in Calgary, I went to Millz because I wanted to make BMX friends. I wasn’t good at riding or speaking English (still now LOL). So I had no confidence to make friends, but a cool dude called Quintin came over to me. He said, “What’s up!” I said, “Hello, I’m Taiga from Japan.” He said, “Nice. Cool man! Ride with us.” And then the Calgary dudes put me in their chat group. I realized that BMX culture is beautiful and awesome. We were getting along quickly beyond [our differences in] countries, ages, and languages. After that, I started riding with them in the streets. I couldn’t ride much the first year because I was attending school. So I got a working holiday visa to ride more with homies and work too. My second year in Calgary was really fun thanks to the 403crew and my former coworkers. I was able to get VX clips, take photos, and gain work experience in Canada. I can’t thank the people enough who were involved with me.

How does BMX in Canada compare to Japan?
Taiga: Comparing the BMX scenes of Canada and Japan, the number of skateparks in Canada is overwhelmingly higher than in Japan. Therefore, there are many riders and kids, most of whom can ride both park and street. Respect! I feel the Japanese BMX scene is getting hot right now, as well as Canada. Daisuke and Pegy made a Japanese BMX media site called “MOTOBUNKA.” So sick! Also, great Japanese young guns and kids are getting sponsored recently.

How was the final road trip to BC for you?
Taiga: It was one of the best memories in my Canadian life. There was beautiful nature and awesome riders. I really appreciate that Austin filmed me with his camera for this trip video. I had a great time with all the riders who rode with me and treated me well in BC. Also, I stayed in Jay and Chad’s house for a week. Thank you to them for the hospitality. In the end, please feel free to contact me if you guys come to Japan. I miss you guys a lots and hope to see you soon! Homies forever! 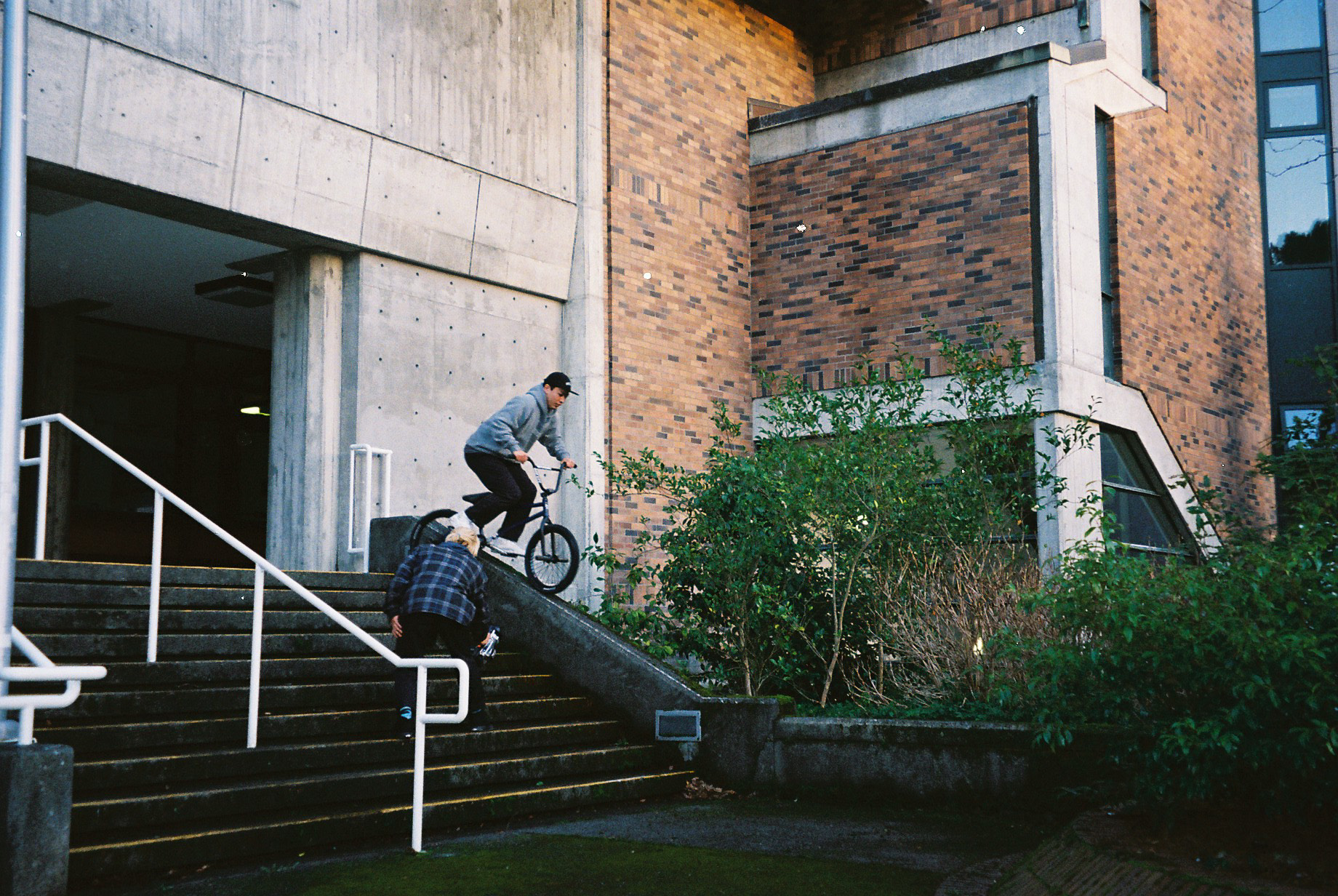 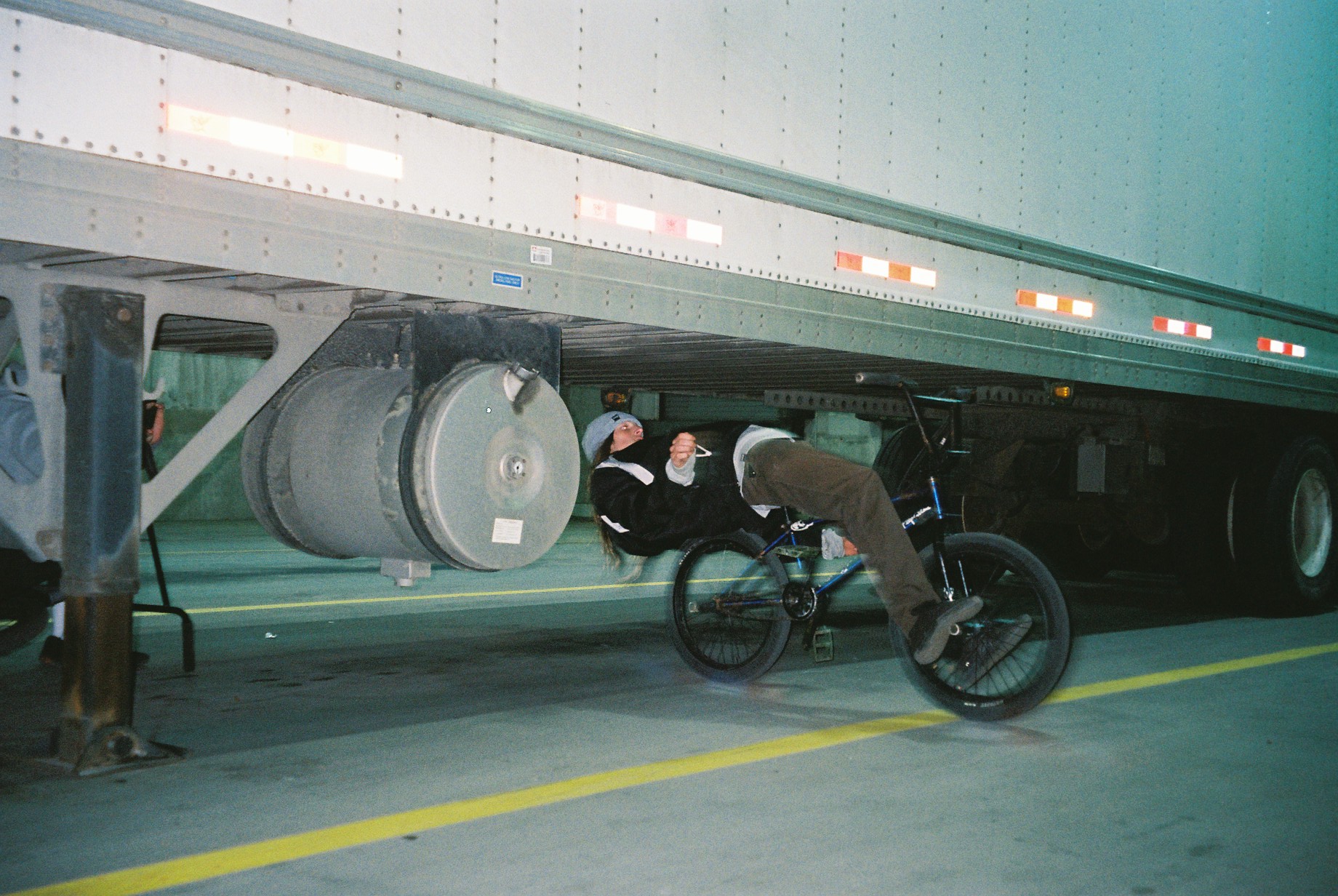 Do you have any other projects in the works you’d like to talk about?
Austin: I’m working on that full-length Calgary scene video and will most likely put out a leftovers edit sometime later this year. Nick Halisheff and Connor Campbell are also working on solo projects with me.

Any last words or shout-outs?
Austin: Huge thanks to Matt Perrin, Josh Bissat (Gorilla Jam), Brad at Rock Bay BMX, Spencer Macfarlane, Jay Park, Chad Ferch, Taylor Stos, Jordan Suidy, and the boys at Cashmole for being awesome hosts in Victoria and Vancouver. Thanks to Ryan at B-Line Bike Park for giving Calgary riders somewhere to ride in the winter and helping to bring the scene together. Thanks to Matt, Brad, and Devon at BMX Gallery for always having my back in the years the shop was open. Big thanks to all the Calgary BMX OGs, especially Richard Gallant, Ryan Davis (Boicott BMX), Devon Rohl, Matt Thomas, Chris Spicer, and Kyle Freeman. These are the guys who helped me see what the BMX life was all about. Last but not least, a huge thanks to the Northern Embassy for shining light on all the amazing talent we have in this country and for the opportunity to do this interview. 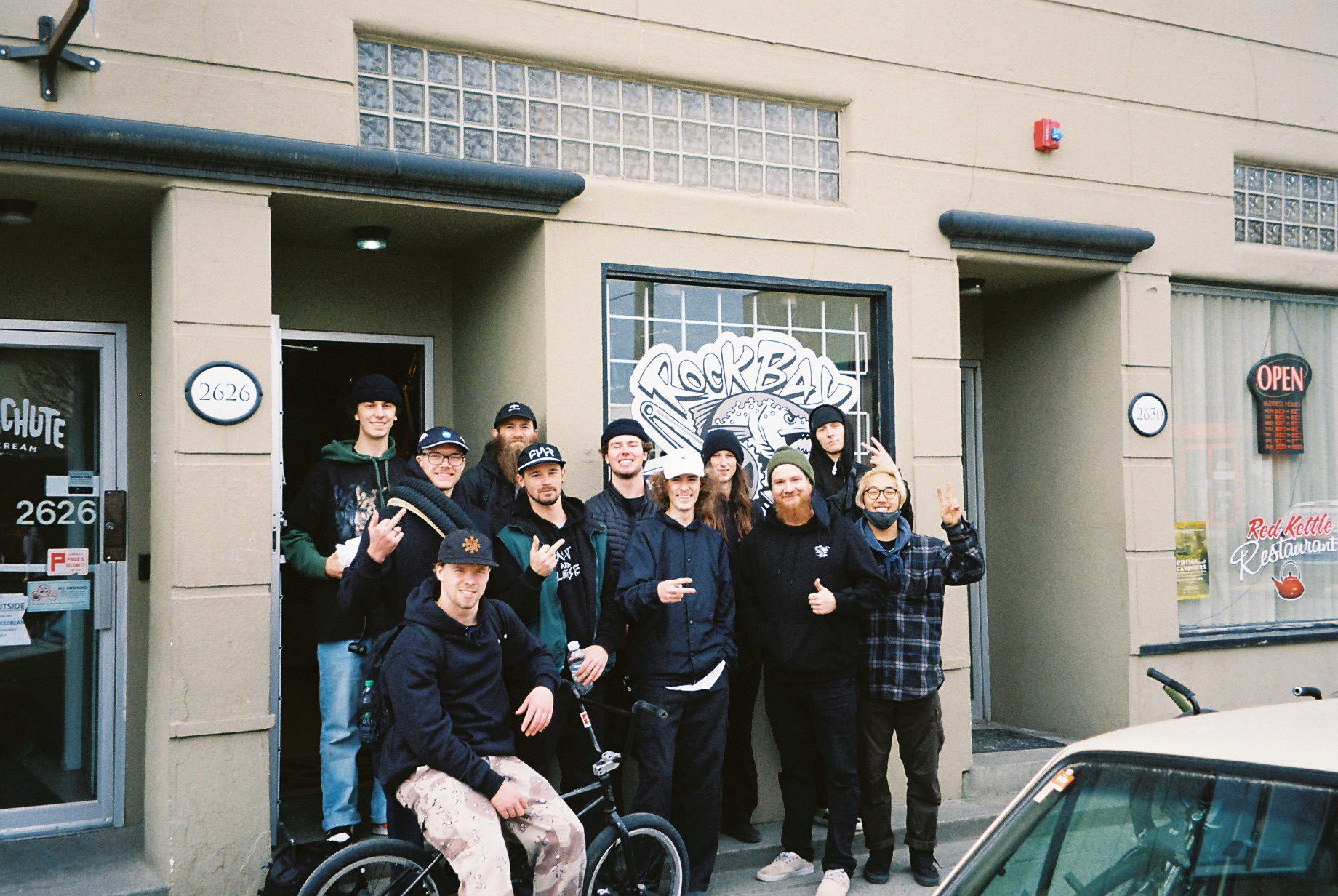