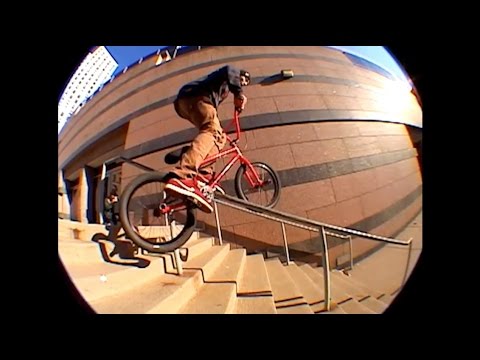 Posted at 10:58h in ARCHIVE by Mason Gray 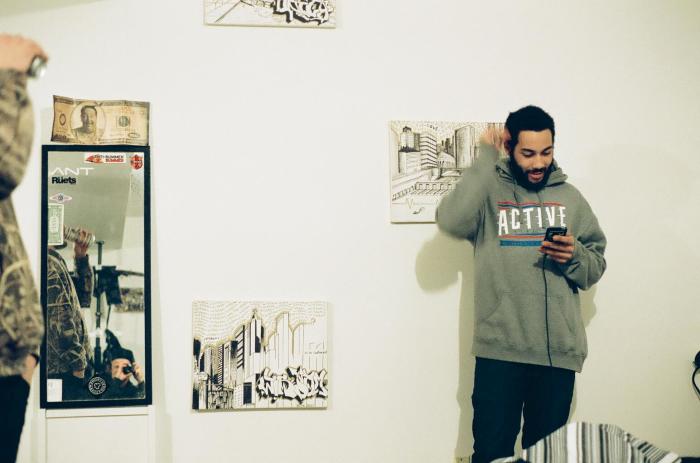 Chijioke in his crib.  Photo by Mason Gray.

Back in March I went to Toronto for the Bike Show weekend, and ended up puking in Chijioke’s apartment for 24 hours, and not even making it to the show on Sunday. Actually that’s not true, I made it there long enough to puke all over the floor of the CNE’s bathroom & catch a cab home, Dance Cave got the best of me. I had hit him up a few weeks prior and asked if he wanted to do an interview for a zine I was working on at the time, he was into the idea so I made the mission there for the weekend to hangout. The zine never panned out and the interview sat on my computer for ages, so I decided to hit up Chijioke again and see what was new with him. For those of you who aren’t familiar with the homie, he’s been killing the streets of Toronto for years. I actually met him when I was 12 or 13, he was getting shoulder surgery the next day & gave me the pegs right off his bike because I had some super busted ones at the time, I was psyched.  Since then he’s made some serious moves, I figured it was a good time to hit him up again & compile the 2 interviews together. The first portion is from my stay at his place during  March of this year, and the second is from when I hit him up a few weeks back. Thanks for letting me puke at your house & agreeing to this interview, give it a read  if you have some time people & stop sleeping on my dude.

You recently made the move from Volume/Demolition to the Macneil Pro team, congrats on that. How’d did that all come about?

Thanks man! I couldn’t be happier about the move. I think it just made a lil more sense, overall. For the most part, I was dealing with all the
Macneil/10pack(RIP) guys regularly for 90% of my volume/demo business anyway.
Also now that everyone knows about the 10pack news, they wanted to keep me a part of the company so they offered me the spot. It’s awesome, the team is so tight now. We’ve all been friends forever, so it’ll be cool to see what we can cook up together.

Toronto has produced some really talented riders, such as Chris Silva. What’s the scene like in TO these days?

The scene is like it’s always been, not as thriving as people would expect. It’s still tough to find someone to roll with sometimes, especially this time of year. Everyone is so spread out, and there’s so few of us to begin with. It’s all good, though. Last year, I saw a bunch of new faces at Duff Grove and Wallace, so hopefully those kids are looking forward to getting back out in these streets.

Your riding is just about as creative as it is technical, who were you influenced by early on with riding?

Ha ha, thanks dude. As everyone knows, I rode trials/MTB before bmx, so that had a lot of influence on my riding, for sure. But as far as
people I was into when I started riding little wheels (2006-07)… I’d havta say guys like Chase D (with a brake), Dave Freimuth, Jim Cielencki, Wiz, Seth Kimborough, Jeff Klugiewicz, Jeff Kocsis, Joe Cox, Tony Hamlin to name a few. 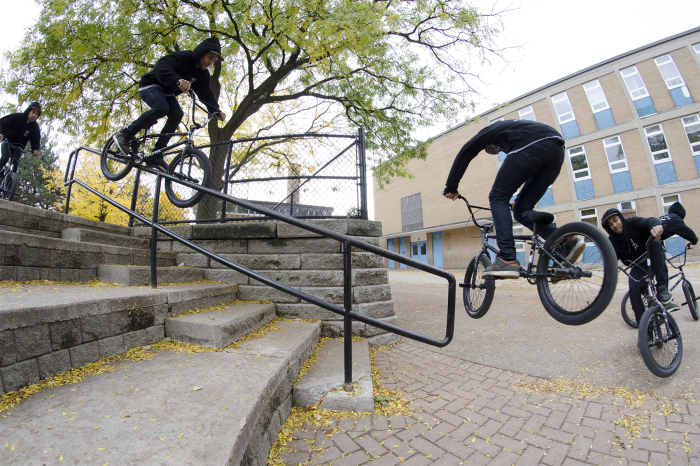 Chi gettin’ dangerous on one of Toronto’s most sessioned rails with a Crook-180. Photo by Trent Barker.

Who are some riders you’re feelin’ these days?

Not even just saying this, but everyone in DWOK is tight. Super into dudes like Bengo, Mike Gray, Moxley, Dilly, Liam Z, Rob Diquattro, David Grant, Broc Raiford, Greg Henry, I could go on for ages.

You mentioned that you cant stop changing your setup, is that just to keep things fresh?

Yeah, I think it’s my mechanic side showing itself, ha ha. I can’t leave my bike alone for too long, I’m always tinkering with different things on it. If I’m bored at home in the middle of the night, the first thing I do is throw my bike in the stand and stare at it. It makes things fun, and I get to try out tons of different and fun bike setups.

Hopefully onward and upward from 2013. I had such a fun time last year riding my bike, so I’m determined to be on it even more this year. I just can’t wait for the weather to change (hopefully by the time this is out, we’ll be golden)

I noticed your room is covered in graffiti canvas’s, did you do any of those?

Naw, I wish I had artistic talent ha ha. My homie Josh did all those for me, I love em.

ha ha My cats are the dopest, word up Milo and Beatrice!

Other than riding, you seem to be pretty into Music. Who are some artists that you get down with?

Yeah, music is a pretty huge part of my life too, I’m so obsessed with it. Been listening to a lot of beats and a lot of hip-hop lately. Mr Carmack, Thee YL, Roc Marciano, Constrobuz, Oddissee, Denaun Porter, Knxwledge, Iamsu, Atu, Action Bronson, Jai Paul, Sorrow, Twinztrack, Mikos Da Gawd (again, I could go on for ages)

Take an approximate guess of the number of bottles smashed at Dance Cave during any Toronto Bike Show.

When can we expect a fiery welcome to the team video for the boys at Macneil?

Ha ha, as soon as it’s not shithead cold out, it’s back to work on that ting! Can’t wait to get into it. A JackyLboi X Xanny specs production

The JackyLboy X Xanny specs production that was mentioned above aka his Welcome To Pro video for Macneil.

Word! You for hooking this interview up, Macneil, Bikesonwheels,
Ampersand Co, Vitaly, REPSET, BMXFU, DWOK, the Toronto ridaz, 387 cru, mom n dad what it do.

So its been a couple months since I last saw you, whats new in the life of Chijiolio?

Just been doin’ the same old thing, man. Riding when I can, workin’ when I gotta. Seasons been pretty good to me, so I’m just staring to slow down with the bad weather setting in. Trying to get a trip planned, so hopefully I can escape the cold in not too long.

I saw on Instagram a little while back that you got hooked up with Vitaly Design & Ampersand Co. from just creeping their IG & website they seem like pretty well-established jewelry companies. How did that all happen & what’s up with them?

Yeah the Vitaly/Ampersand thing is something I’m super stoked on. The guys that started both companies are from the same town as me, so we all grew up riding and snowboarding together. I stuck with it, they did the business thing but stayed stoked on bikes and other extreme sports. So as soon as they had the means to, they started both companies and set up a team. They asked me to be on the team pretty early on, and I gotta admit it took me a bit to get used to wearing any jewellery, but I’m stoked as hell on the shit they produce. They’re doing big big things, so it’s an honour to be a part of such a cool and progressive brand. They have some huge names on that team page, so it’s a serious trip out to see my dumb face up there with all of them. Check them out @ampersandco and @vitalydesign!

Speaking of new sponsors, you’re doing it for Merritt now too. Much deserved, how did that all pan out & when can we expect some fire from you?

Thanks man! I can’t be more stoked on the Merritt thing, those guys are doing such dope things. Brennan shot me a text a few weeks back asking if I wanted to rep them, so I obviously said yes right away ha ha. I’ve been looking up to that dude for a minute now, so it was a pretty surreal message to get. I’m good friends with a few of the dudes on the team already and I knew it’d be a good fit. I got all my stuff the other day and everything looks so dope, I can’t wait to toss the new whip together and give everything a go. I sent them over my Welcome edit a few days ago, so it should be out by the time this drops (if not, then very soon).

He was right, watch this if you havent yet!

You know that since you & GH are double-teammates now (Macneil & Merritt) you guys have to film an Olive/Mocha Swirl Video right?

Ha ha, we’re hat trick teammates. FU, Macneil and Merritt ha ha. Yeah man, we’ve got some plans for 2015, that’s for sure. Just sucks cause both of us are stand up citizens and work full-time jobs, so it can be hard to hook up sometimes. Got some trips in the works so we can remedy that.

Duff Grove seems to have a pretty tight-knit group of locals that frequent that park, explain what’s so special about that place?

I think the Duff Grove phenomenon might be coming to an end, unfortunately. This year was a little more rocky than previous ones. Skater/rider beefs were popping up, staff wasn’t super stoked on the drinking/smoking a few times, and some kids even got robbed at gunpoint recently. I guess we just couldn’t keep it a secret for long, and now it’s slowly turning into a regular Toronto skatepark. It’s still fun as hell to ride, though. Duff has literally the best flat rail I’ve ever ridden. It’s so perfect, I can’t deal. Plus it’s not an intimidating park at all, obstacle wise, so it’s really easy for everyone to have fun there and ride lots of different shit.

Where are some places outside of Toronto you’re trying to escape to this year?

I def gotta get back to London, you guys have toooo many spots. I wanna get to Arizona, back to SD for a week or two, hopefully finally to NYC, maybe even Europe. I’m just kinda going with the flow, so whatever happen’s happen’s. Even if I stay in Canada, anywhere new will be dope. 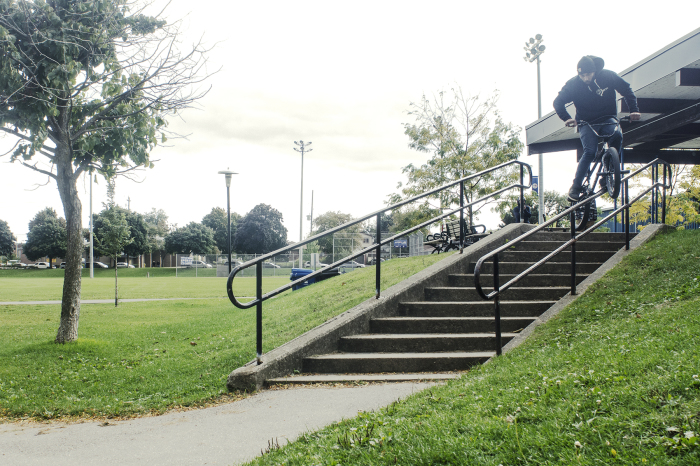 Crank-Arm 180 on a fire setup. Find the clip in his Merritt Video, Photo by Trent Barker.

Currently working on a split part with my brother Chris Cadot. We’ve done a few web splits and have been stoked on them, so we decided to work on a DVD quality part together. It’s coming along, stoked on sharing a part in the video with him.

Last I heard it was at the duplicators already, so within the next few weeks I’d say!

Who’s parts should we keep an eye out for?

Whole thing is gonna be bangin’! Everyone killed it for this, so keep an eye out for that entire damn ting!

Since its been a couple months, anybody else you wanna thank or shoutsouts?

Embassy for the love, my girl for keepin’ me on the straight n narrow, Mike and everyone at Merritt for the opportunity, my boss for letting me take tons of time off to be a bmx bum, anyone that I’ve ridden with over this past season I see you!