Posted at 01:02h in ARCHIVE by Aaron Gates 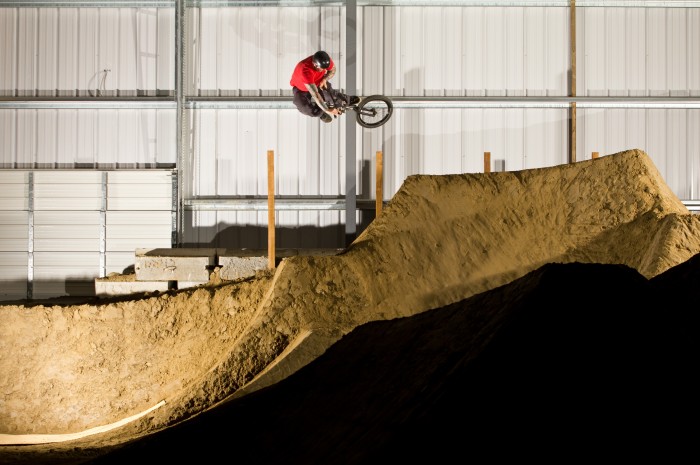 With the demise of the Igloo and the closing of Skatebarn in Washington, the Northwest has been left with a shortage of indoor parks for more than a year. Rainy street sessions and, maybe more commonly, snowboarding have been the norm. This situation is about to change. Over the past few months, Joe Prisel has been building a masterpiece in a highway-side warehouse in Northern Washington.

The older crowd may know Joe as an original Chenga local who rode in the BS contests around the turn of the century. Joe had a long riding career in both BMX and mountain bikes, but perhaps more impressive is his career as a park builder. Joe is the man behind the Lumberyard in Portland, the Flow Skatepark in Columbus, and many of the features at Ray’s Mountain Bike Park in Cleveland and Milwaukee.

Burlington Bike Park follows in the footsteps of Joe’s past work, but this version has an excellent twist. It’s an indoor dirt park, and it’s one of the first in the world. The park itself is what you would expect from an experienced builder with the resources to build whatever he wants. Although the park accommodates all skill levels, the main section of the park features landings stacked eight feet tall and seemingly endless transfer lines.

If all goes according to plan, the park will become a cornerstone of the Northwest scene. The Northwest has long been a region where riders have much in common, but are fragmented by borders and distance. With the quality of the current build, the project’s potential for growth and its central location (about 20 minutes South of Bellingham), the park has the potential to bring riders from across the region together for epic sessions for years to come.