Posted at 15:28h in ARCHIVE by Jeremy Deme 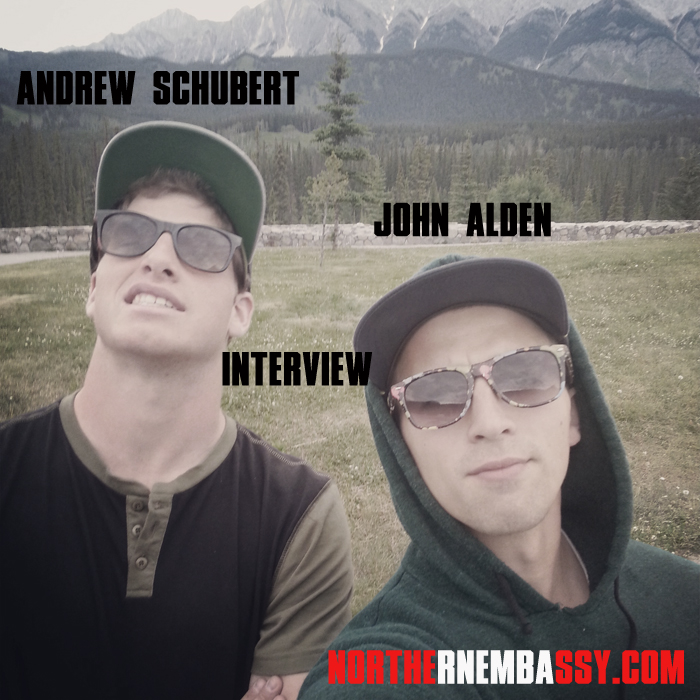 If you’ve been paying attention to BMX in Canada, or BMX anywhere for that matter, you’ve likely heard of Andrew Schubert and John Alden in the past couple years. It’s pretty easy to detect how much fun these guys have riding their bikes on whatever they happen to be riding any given day. We hit up these two humble Calgary boys to get to know them a bit better and see what they’ve been up to as of late.

Let’s start with the usual suspects, name, age, where you’re from and where you currently reside:

J- As soon as I learned how to pedal a bike I wanted to make the bike do something more than go from A to B. I always looked at everything as an obstacle. I was probably around 11 years old, with an unhealthy addiction to playing Dave Mirra BMX games when my Dad brought home my first ‘real’ 20″ BMX bike.

Andrew and I met in 2005. When we were kids we pushed each other to learn new things every time we rode. To this day he is easily one of my favorite people to ride bikes with. It’s so crazy to think about the friendships you make through riding bikes. 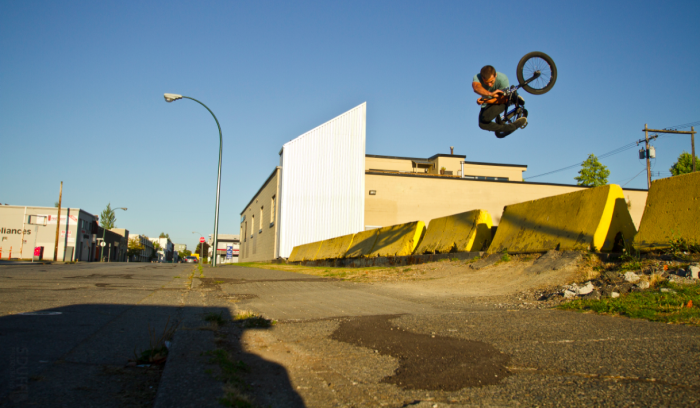 John – table in Vancouver, BC

Do you think the fact Calgary only had/has the one park in town (Millenium) made the scene tighter? Im guessing that’s where you guys started riding?

A- With Mills being the only park in Calgary it has defiantly kept the scene tight, most everyone has been riding together for at least 5-10 years and see each other a few times a week. I have made some of my closest friends there. Myself I did not start going to Mills a lot until I got my license, it was more of a weekend visit. Since getting my license I have probably rode mills nearly every night I can for the last 5-6 years…

I’m not sure if there is any park in Canada as big as Mills but being the only park in town did you guys ever get tired of it/wish there were a few smaller ones more spread out around Calgary?

J- I think having one park keeps everyone tight. You can always go there and chill with someone you know. From time to time you can definitely get worn out riding the same skatepark. Calgary has so many other spots to ride, there is so much good street here. There’s always something fresh to do here.

A- I’d be lying if I said I didn’t get burned out on Mills, but like John said there is an endless amount of street here to keep it fresh. It would defiantly do the scene wonders if there were a few more parks tho. 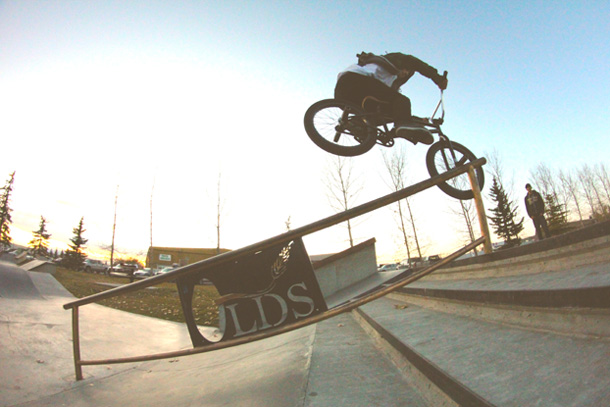 It seems like the Calgary scene is banging these days and one of the best in Canada. Why is the scene so rad and who are some of the dudes people outside of Calgary might not know of but are a big part of it.

J- I think the main thing with the Calgary scene is there are no real cliques and everyone rides with everyone. Seeing as there is only one park, everyone knows each other pretty well, which keeps the scene tight. In the next few years there will be tons of up and comers coming out of Calgary but if I had to name a few I’d say, Teddy Eyob, Brock Gandy and Jay Park. Keep a look out for those guys.

What’s the first thing that comes to mind when I say Surrey, bc

What happened in Surrey?

A- Well… I had been telling everyone on the trip when we get to Van I think we should make sure all the bikes come inside at night. We had been sleeping in Wal-Mart parking lots almost every night and ended up in a Surrey Wal-Mart the first night in the Van area. Needless to say it’s Surrey so you know what happened next. Luckily myself and Josh made sure our bikes were inside. But “Surrey” got the other 4. Fuck Surrey. 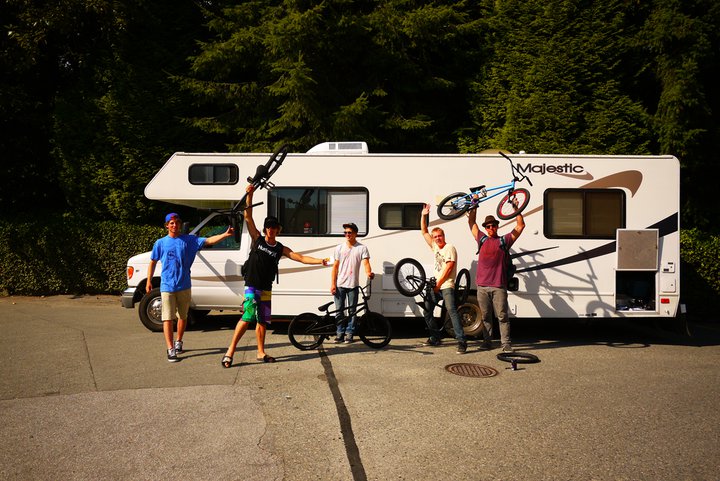 The first time I met you guys was the day after this happened… I remember getting a call explaining what happened then seeing you guys pull up in the RV and everyone was in good spirits. I remember being amazed that 4 guys had just had their bikes jacked but everyone was still stoked to continue onward. This plus the fact that you guys had somehow managed alot of bmxers dreams to be driving around in an rv shredding new spots, I knew right away these Calgary dudes were rad. Good on ya!

How many RV trips have you guys done now and how important are trips to you guys?

J- I have only been on that first RV trip. It’s still my favorite road trip that I’ve been on (even with our bikes getting jacked). Getting to live in an RV with your friends for two weeks, riding some really good spots, swimming, drinking beers, visiting our friends and making new ones along the way. My favorite part about riding is traveling, and going on trips.

A- There have been 2 RV trips, both equally amazing. Things can always be worse, that’s the way I look at it at least. So yes having 4 bikes stolen did suck, however everyone on the trip loves bikes and fun so we just shrugged it off and kept on keeping on! Right now for me trips really are what I live for, traveling and seeing parts of the world on my bmx, what more can you ask for. Friendships have grown on trips and new friendships are made every trip. 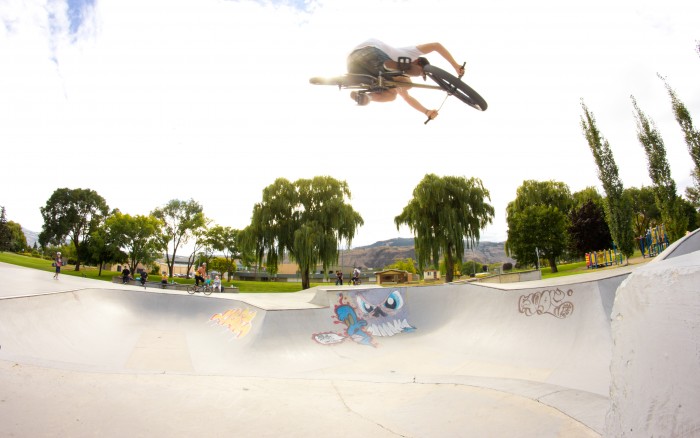 What’s some of your favorite places you’ve been to on trips and what are some top potential destinations for coming trips?

J- Nor Cal was a crazy trip for me. Riding so many spots that I’ve seen in skate videos since I was a kid was a good feeling. 3rd & Army, Woodward West, etc. The Winnipeg trip with Ten Pack last year was surreal to me, rolling with Enns and Biz and all those dudes was just crazy to me at first.. It’s weird to think like.. if you had told me that I was gonna ride with some of the people I’ve had the opportunity of riding with when I was a kid I would of just said ‘yeah right’ haha. I could list off a whole bunch of places I’ve seen in videos and shit for places I want to go to ride, but wherever I end up going is where I wanna go.

A- I feel like the more places you go, the more realize it’s the people that make the trip more than the place. That being said the destinations are still crazy awesome, for myself, San Diego and Van are my two favorite places I have traveled too. As for future trips really, I’m just looking forward to wherever I end up.

Couldn’t agree with you more Andrew. I feel like you guys flew under the radar up until a couple years ago, then really started to get noticed then you both got hooked up. Do you have any advice to all the kids out there who dream of one day having a BMX sponsor?

J- Smoke weed and ride pegs.
A- Have fun, whatever happens happens. 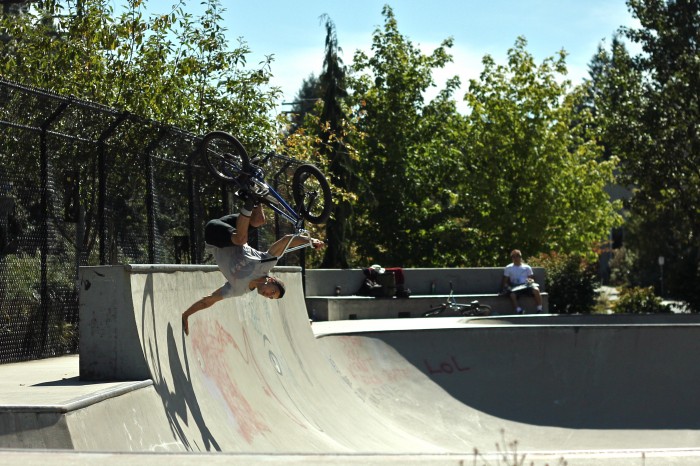 John – Signature John Alden handplant, who else is even doing these? So wild.

Some of the first edits I saw from you guys were SD and in the last couple years have moved to HD. I gotta ask, do you prefer sd or hd and why?

A- The first Camera I got was SD, and from there I bought another SD camera. VX1/MK1 is still my favorite thing to shoot with. What I know about cameras, was all learned on SD VX’s. Unfortunately the footage takes such a turn for the worse when it is uploaded to the web, It just made sense to film HD for the web. I really don’t care if it’s SD or HD, as long as the quality of film work is up to par.

What’s the deal with your trip to Toronto with Darcy Peters to film for a cell phone company?

A- Long story short Darcy won a video contest with Samsung which earned him a 25 grand experience. This experience was a 5 day trip to Toronto to film a few short Youtube commercials for Samsung and a TV Episode for Rad X. I went along just as a tag along and ended up helping with the filming and directing. It was a pretty cool experience.

What are some hobbies/ interests you have outside of riding? Do you work or go to school or?

J- I enjoy playing pool, swimming, hiking, and I listen to a lot of music. I’d really like to snowboard, maybe this year I’ll make a point of getting out in the mountains more. It’s so much fun, I’m not sure why I haven’t got into it consistently. As far as work goes, I took the summer off just to ride more, and travel around a bit. It’s been a blast, I’m really grateful that I’ve had this time. I’ll definitely be going back to work for a while after the summer of fun.

A- Main hobbies outside of riding are being active, hockey, cross country bike rides, aimless walks, hikes pretty much anything active along with video cameras/cameras, they take up a fair bit of my time. Currently I’m not in school nor do I have a real job, but I work odd jobs here and there. Pretty much just try and ride as much as I can. 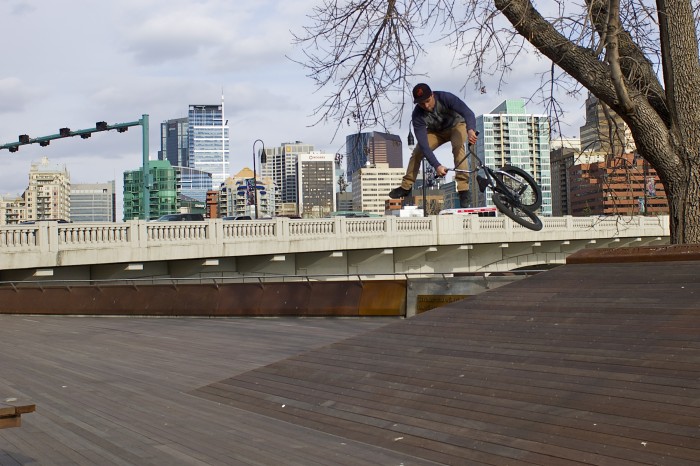 What’s the plan for this Winter in Calgary?

J- It’s looking like winter is going to be decent in Calgary this year. The homies at Fox Racing in Calgary have a fun ramp set up, and they let us sesh that place quite a bit. It sounds like there will be an indoor opening up in Three Hills, Alberta again and that’s not too far for the Calgary riders.

A- We have been working hard to get an indoor in Three Hills ready to re-open by winter. It’s a big job but things are moving. Other than that probably ride the Fox warehouse a bit and try to escape south at some point. 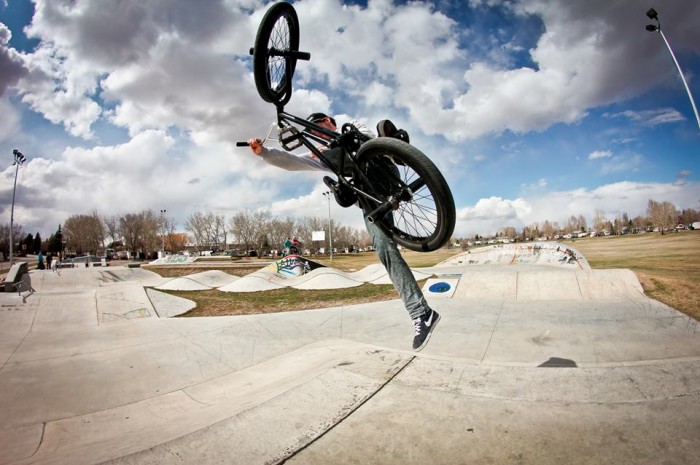 J- Thanks to Mom, Dad, We The People, Populess Clothing, BMX Gallery, Ten Pack, and Embassy.

A- Live it, Love it. Thanks to Bernie, Isaac and everyone at 1664, everyone at S&M, Brad at Populess Clothing, My parents and family, friends and everyone I have met along the way, Can’t thank you all enough.