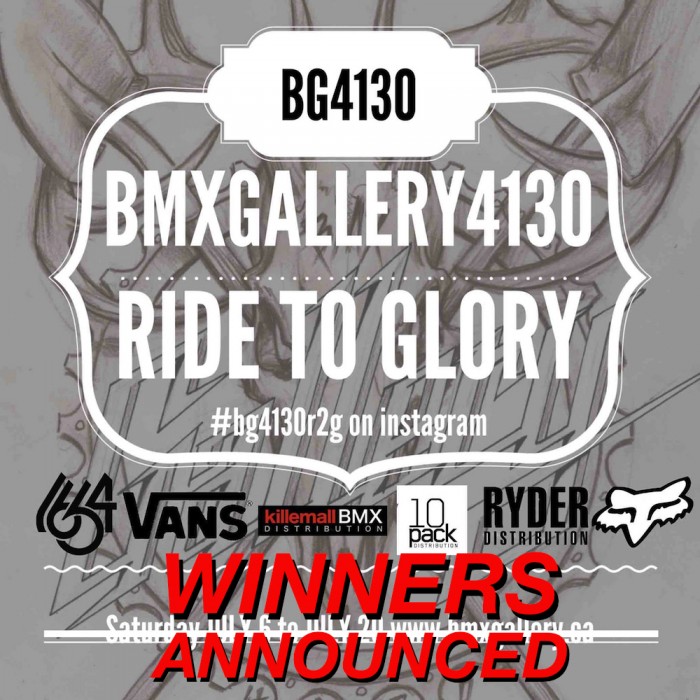 Calgary’s BMX Gallery 4130 wrapped up their Ride To Glory contest earlier this summer, and we finally got our act together to put together an announcement of the winning videos and challenges. If you aren’t familiar with it, you can read the event details here and a copy of the task sheet here. It sounds like the contest got a lot of riders and crews involved from across the country, and hopefully next year will be even bigger. Check out the breakdown of the top seven winners with their videos, and some of the contest challenges after the jump, and you can check out a lot of videos and photos from during the filming of the contest with the #bg4130r2g hashtag. Big thank you to BMX Gallery 4130 for putting on a fun contest like this and opening it up to riders all across the country.

Also for no prize but some extra points we did a longest skid challenge. Chilling Spree took the win on that with a 1400 ft skid and followed by Bad4life which had an amazing skid at 871 ft on the biggest hill they could find in Saskatchewan.

As for the team placements we don’t have a tally for everyone just the top few teams but hopefully next year will have an easier task check sheet to hand in to simplify things a bit. That said heres a tally of the top few and the rest are just in random order. Also note that team No Bikes 1 and 2 would have placed in the top couple teams if they did’t lose track of there score and the task sheet out the window on a road trip so they then made up there own challenges stacking thousands of points haha.
– BMX Gallery 4130