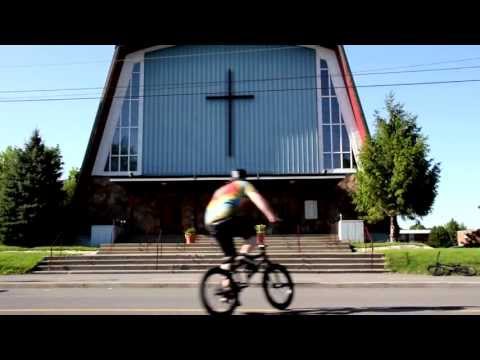 Posted at 06:57h in ARCHIVE by Prashant Gopal 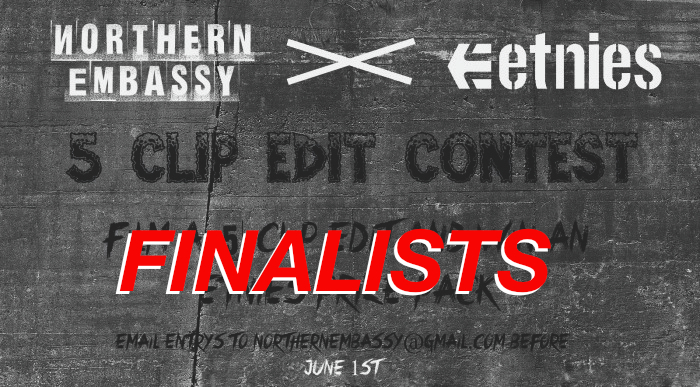 Last week we showed you all the entries to our Etnies 5 Clip contest, and today we’ve narrowed down the top 5. It was tough to pick our 5 favourite, and even harder to find one winner, but we’ve got them listed for you below after the link. Thanks again to everyone that participated in the contest, and an extra big thanks go out to Etnies and Timebomb Trading for their support and providing one winner with an awesome prize package. Look for more Embassy contests later this summer.

Louelle’s video had some amazing tricks, and the ice to 360 was a huge standout.

It’s been a long time since anyone saw any new footage from Justin Kirnan, but his riding and style are as smooth and natural as ever and his whole video came across simply as casual and relaxed.

Dan Cauchi’s video was quick with 5 powerful moves and lines. My favourite was the first line ending in a half cab crank flip.

None of us had even heard of Shawn Fanz before we watched this video, but from beginning to end his video was loaded with solid riding and some hard lines. Getting to showcase unseen talent like Shawn is a big part of what this site is all about, so we are stoked to have this video in second place.

Carl and Riley always come up with something interesting when they work together and this video was no exception. They filmed this video at the last minute before deadline and Riley edited it while sitting out front of a pizza spot (as seen in the video thumbnail). Their entry didn’t take itself too seriously, the riding was raw, fast, and creative, and ended with a gap in to the street. This video made us want to go out and ride after watching it more than any of the others, and after the first watch it seemed like a no brainer that we had our winner. Congratulations to Carl and Riley for their work and you’ll be receiving your Etnies prize package courtesy of Timebomb Trading soon.