Posted at 22:45h in ARCHIVE by Jeremy Deme 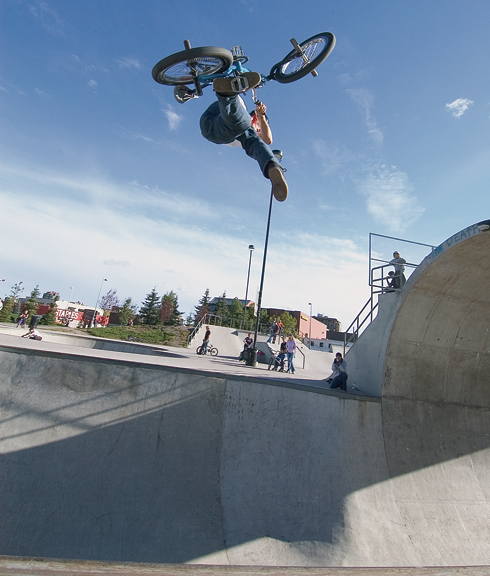 “Here is a photo of Jamie Merritt, can can at on the Millennium vert ramp. That ramp is a cement beast. Look at the far side, see how wavy the cement is?  I’m nervous looking over the edge of that thing. But Jamie rides it like it’s a mini ramp.

When I was a kid I heard the following is a story about Jamie that made him a legend to me for years before I met him. I hope to hell it’s accurate. If it’s not accurate I apologize ahead of time, but the story is so good I’m passing it along. Correct me if I’m wrong in the comments.

Ok, in the early 90’s 2-Hip, makers of the Pork frame, ran the precursor to Hoffmans’ Bicycle Stunt (BS) series, that eventually kind of morphed into part of the X-games.

The 2-Hip series was the King of Vert. It went all over America, and it had one Canadian stop in Windsor, Ontario.  All the Canadian BMXers went. Everybody went. I didn’t because I was 11, but I wish I did.  Jamie Merritt and Jay Miron, from Thunder Bay, were the best vert riders Canadians had.  I think they might have been the only vert riders Canada had. Although, at the time, you either rode vert or flatland, “street riding” was in its infancy.

Now, in the early 90s, the only person doing flips on a BMX was a guy named Tinker, who was doing them with clips on his pedals, in a circus. Jamie was about to change all that.  At the contest, for his last trick, Jamie went balls out, and tried a flip to fakie. He got upside down and froze, and came straight down, but he was OK. After getting up like it was nothing, McGoo, who was announcing, called Jamie, The Terminator, because he was fucking invincible. If you ever heard of The Terminator, that’s how the name came about.

Anyway, an almost flip to fakie would have been the talk of BMX for months. In the early 90s, there was no Internet so all the talk lasted at least a month, from one freestylin’ magazine till the next one. Rather that the ten seconds you have to talk until the next jaw dropping web-edit is posted now. Jamie would have been all the talk of the whole BMX world, if Mat Hoffman didn’t drop in right after and do the first 900 ever. Bad timing for Jamie if there ever was any.

I think Mat Hoffman saw Jamie get upside down and realised he was a couple of real tries away from rolling away. I think Mat saw the future and took it home to dial it in. I think that Jamie had a vision, that although he didn’t pull it, he planted the seed that that started flips. I think, if people went back over the beta tapes, Jamie Merritts contribution to BMX in his two, one minute runs at that contest, seriously changed BMX.”