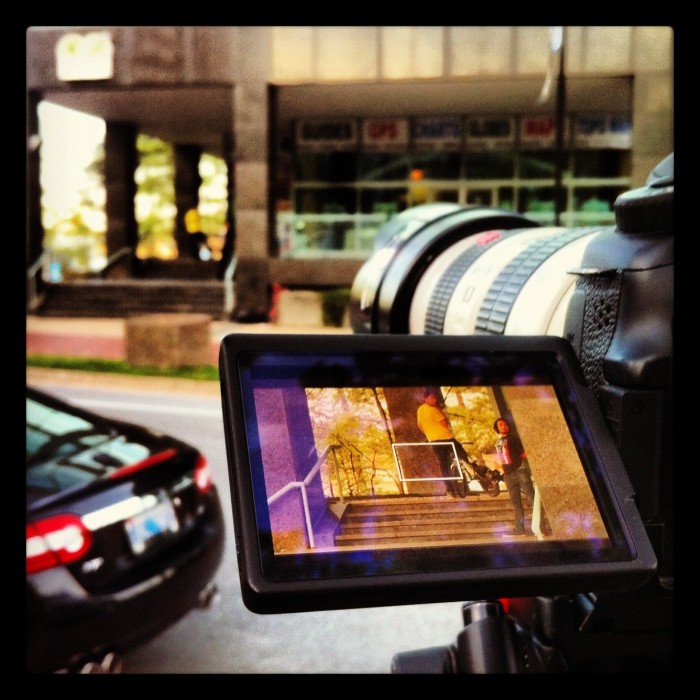 It’s not everyday that a BMX DVD drops, and even less often for a completely independent Canadian DVD to drop. Needless to say when we caught wind of Business, a BMX DVD out of Halifax Nova Scotia, we were pretty stoked! We hit up Byron Kutchera and Ian Fleming to get all the details on the dvd and the making of. Business premieres this friday in Halifax, read on for more info on that as well.

How and when did the idea to film this DVD come about?

We’ve been talking about it for years because we’ve always enjoyed watching each other’s work and wanted to start doing some collaborative projects. We have been independently putting out web content for years, but the idea for a DVD came about in 2010. It was time to team up and take our video work to the next level. We decided that in the new year we’d both update our camera gear and film a collaborative DVD together. The main reason we wanted to film this DVD was because we wanted to make something physical that every rider in the Halifax BMX scene could be a part of, something that they could watch to get stoked on before they went biking. We really wanted everyone to be a part of it. We tried our hardest to make everyone feel welcome to come film with us and we would never reject anyone that wanted to film a clip or two. We even made sure the young guys in junior high would come out on rides with us just incase they wanted to get a clip. There’s a few of our friends missing that we really would have liked to get clips with, but it was a really busy year and some people were injured – we ended up not really getting out with those guys as much as we wished we could. Maybe next time. 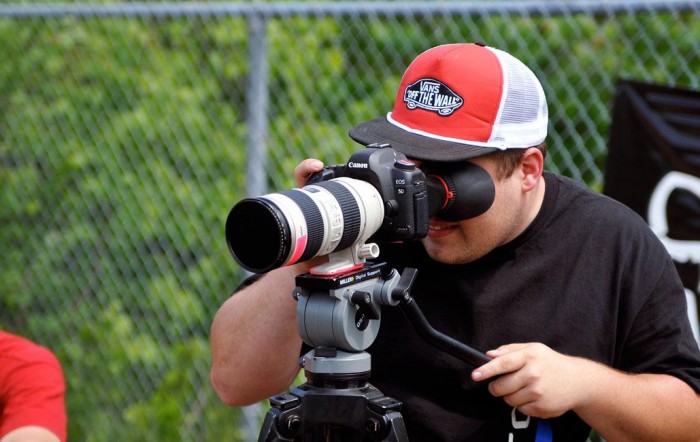 How did you guys decide who would have parts?

We were kind of undecided on how the layout in general for the DVD was going to be until probably mid-summer. We didn’t know if we were going to put out a huge Halifax mix tape with a MTL mix and Toronto mix, if we were going to do a bunch of split sections, or just straight up parts. As we collected footage we just saw our feature part guys stacking clips and working really hard, so we decided it would definitely be best for those guys to have parts that they can call their own. 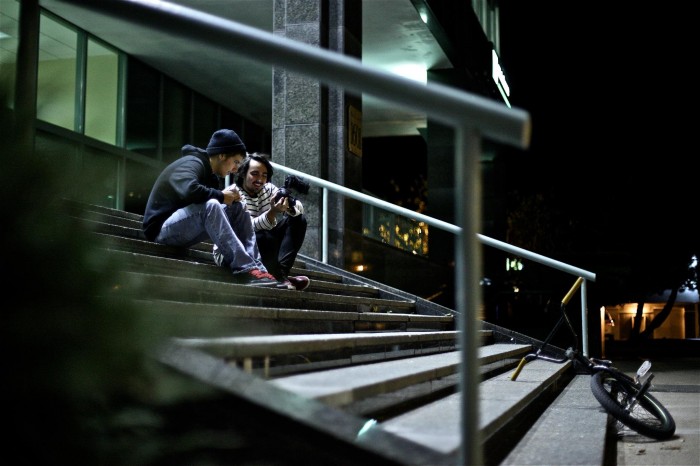 How long have you guys been filming for it? 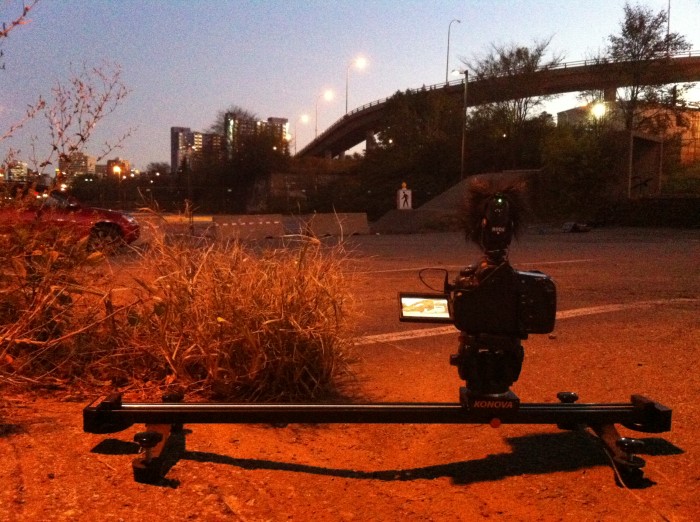 Where was the DVD filmed?

The DVD was filmed in Nova Scotia, mainly Halifax and it’s surrounding areas. The video also features a Montreal train trip section as well as a Toronto section that features two Halifax locals (Terrill and Kerry) that had just moved to Toronto two months prior. 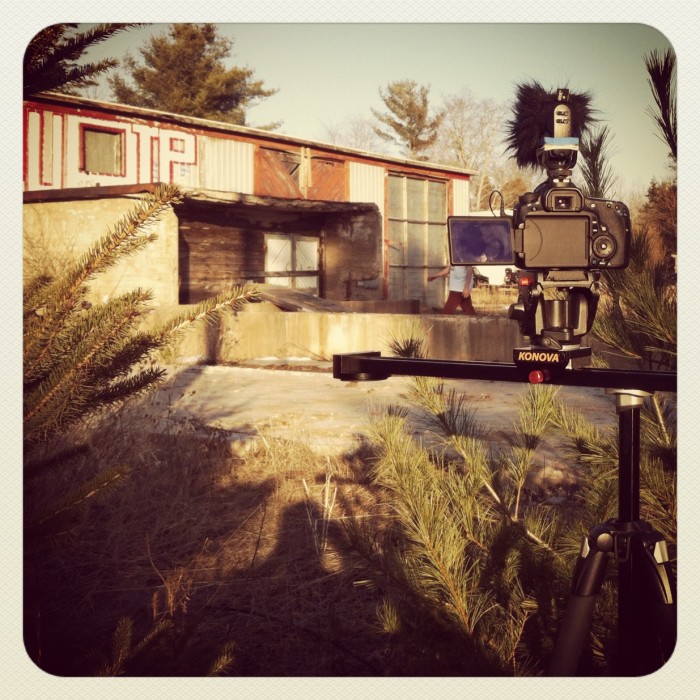 What made you guys decide to film a full on DVD rather than doing web edits?

It was pretty important to us to produce a DVD mainly because DVDs stay. Web videos are forgotten about in a week. A DVD is something physical that people can have forever. It’s also just a way better feeling to sit down with a DVD and some friends and have a good time as opposed to crowding around a computer screen to watch a 4 minute web video. 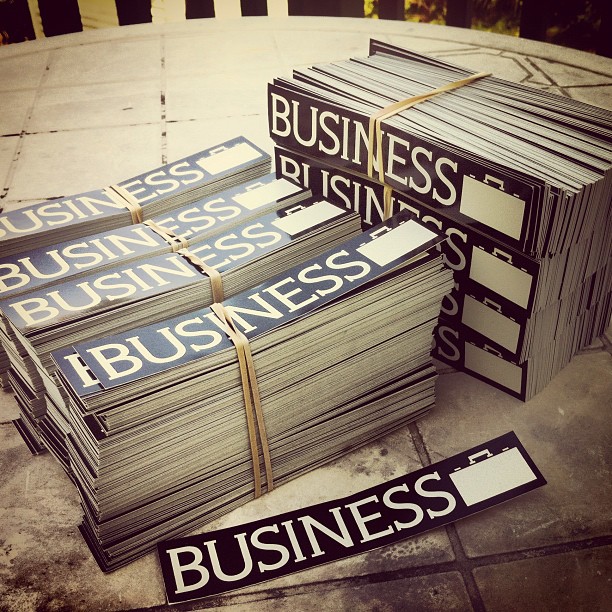 Did you and Ian edit split filming and editing?

Yep, the filming was split pretty equally. Ian edited more than half the sections while I took care of the color correcting, sound mix, and graphic design. 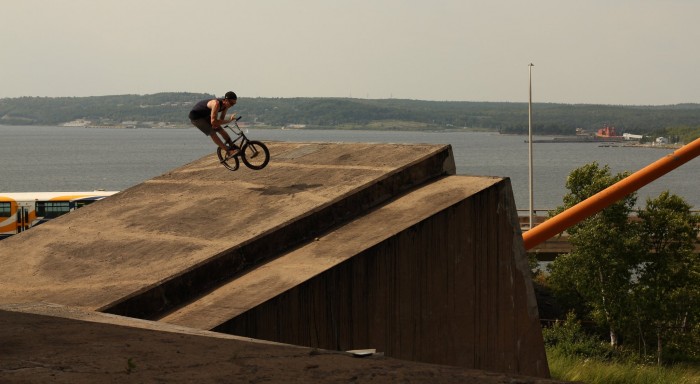 What are some of the clips you are most stoked on in the movie?

Too many to name and more that we don’t want to give out. Off the top of my head our friend Paul, who many people haven’t heard of in the Halifax BMX community, 360s some pretty crazy stuff in one of the friends sections. All the main riders did stuff we’re insanely stoked on. 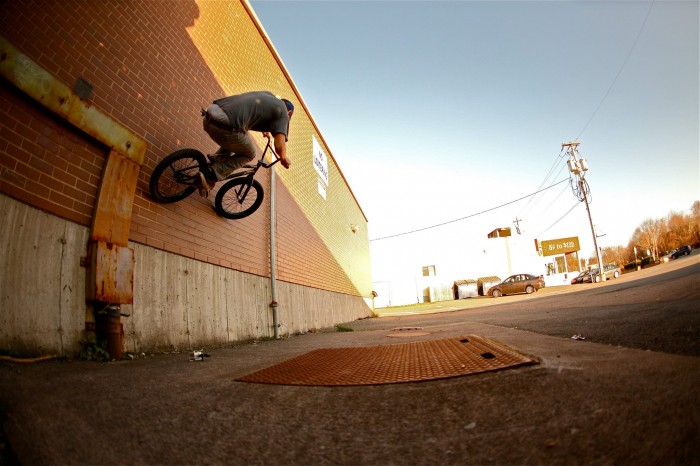 When thinking of an independent BMX DVD name, Business isn’t something anyone would expect. Where did you guys come up with the name and was there some kind of story behind it?

Byron – Well, the name itself came from Ian always yelling “HAHA! BUSINESS!” when people landed something he’d be really stoked on, and Ian gets really stoked probably too often.

Ian – Then when we were trying to think of the DVD name and we were brain storming, Byron said it should be one of those things that come naturally, like a funny quote after the end of some random clip. We came to realize how often I yelled that at the end of tricks and thought it would be a good name for the video.

Byron – It works pretty funny too in an ironic sense, considering BMX is all about good times and not being super serious which is the opposite of something you’d classify as business-esque. We thought it worked really well and landed on that name for the DVD. 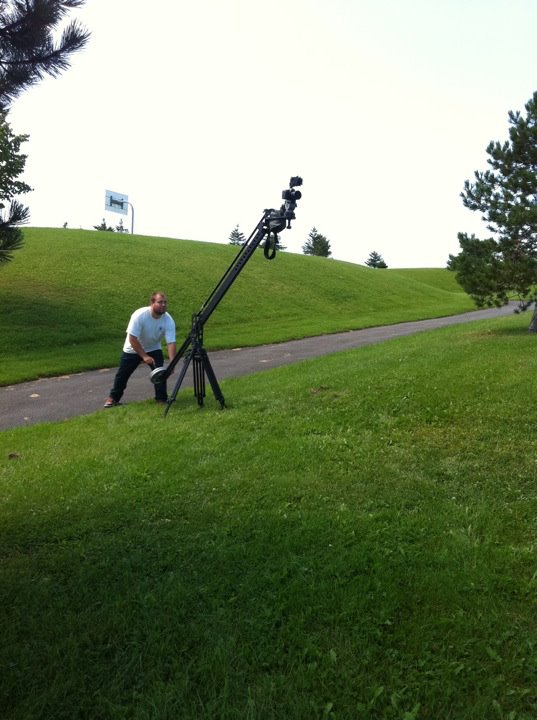 Were there any riders who really went above and beyond in filming for Business?

Everyone who filmed a full part, for different reasons, especially impressed us. It’s pretty interesting to see the things that you see when you’re behind the camera. Riders tend push themselves to another level and do things that they probably wouldn’t normally do if there wasn’t a camera pointed at them. I feel that there’s a mental thing going on in everyone’s head that causes them to go even further knowing they are being filmed for a DVD as opposed to a web video. I can honestly say that the riding in this DVD is best street riding footage that I have seen anyone in this video do to date. The riders have been so driven every day. Kyle excelled so much this past year and his stuff is insane. Ryan is a loose fast ramp rider who filmed a crazy full street section. Harrison and Adam both like to stay close to the ground day to day and they both did huge stuff that I can’t picture them wanting to do again. But above all we were most impressed with our good friend Martin Tonner. People rarely see him do anything because he’s just the kind of guy who comes to the park with a smile on and talks with everyone. People have no idea how incredibly talented and crazy he is on a bike and I’m so excited to see everyone’s reaction when they see the amazing things he’s done this year. He also took the hardest crashes out of anyone during the filming and always got back up and tried it again. There’s even been instances where we need to talk him out of trying it again. So stoked and proud of him for the things he’s done this year. 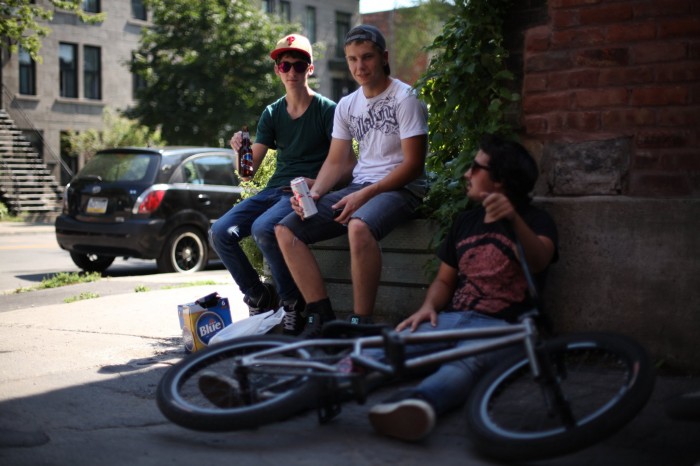 Any advice for any filmers/ riders in Canada who are thinking a BMX DVD?

Never go into it with any profit in mind. Do it for your friends and your scene and do it because you love making videos. If you want people to be into it make it as cheap as your funds will let you. A BMX DVD is made to be seen. 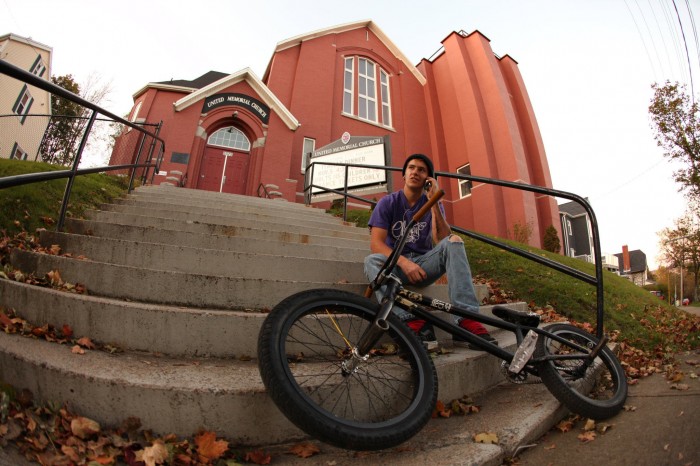 When and where is the DVD going to be available?

It’s going to be available directly from us, and every local bike shop in Halifax that carries BMX. We might even set up a small online store if there’s enough interest coming outside of Nova Scotia. 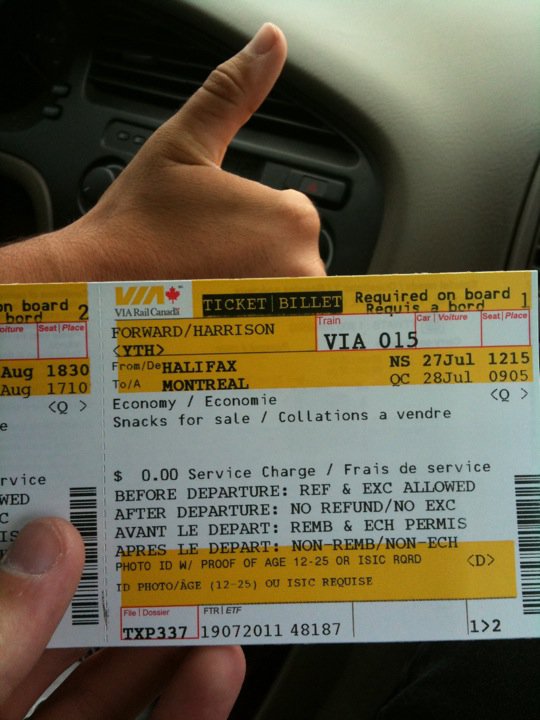 Any last words or thanks?

All the riders for going above and beyond and pushing themselves past their comfort level for this DVD. There would be no DVD with out those guys. Evan Faulkner for letting me borrow his camera lenses for months at a time, HAF Skate and Tattoo, Hubcycle, Ideal Bikes, Sportwheels and Bikes by Dave for Showing there support to the Halifax Bmx community and allowing us to use their shops as a store front to sell our DVD! 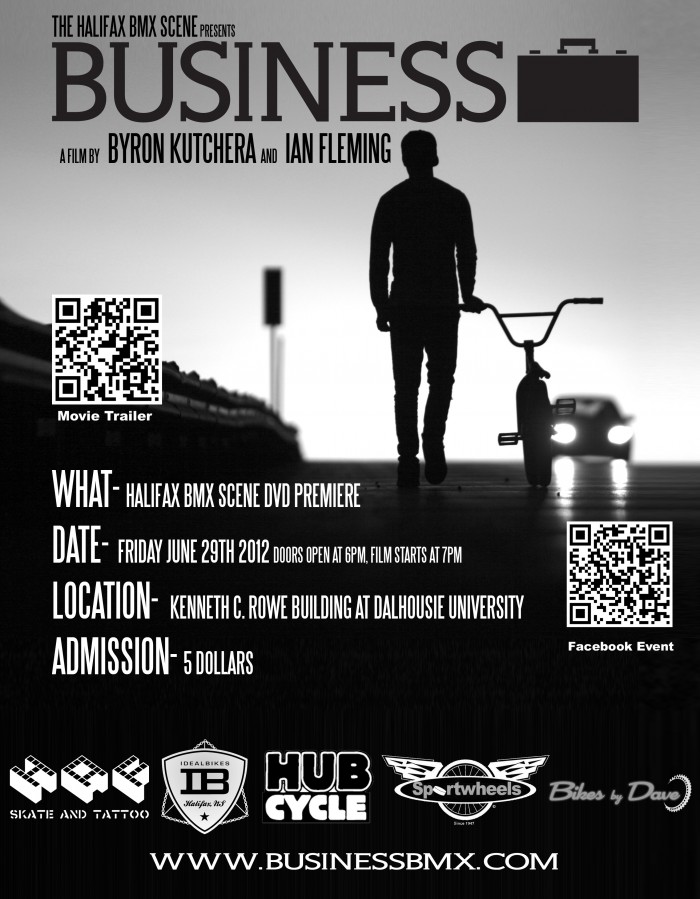 If your anywhere on the east coast this weekend hit up this premiere on Friday night and support Canadian BMX DVDs! Hit up Byron at byron.kutchera@gmail.com to get your hands on a copy