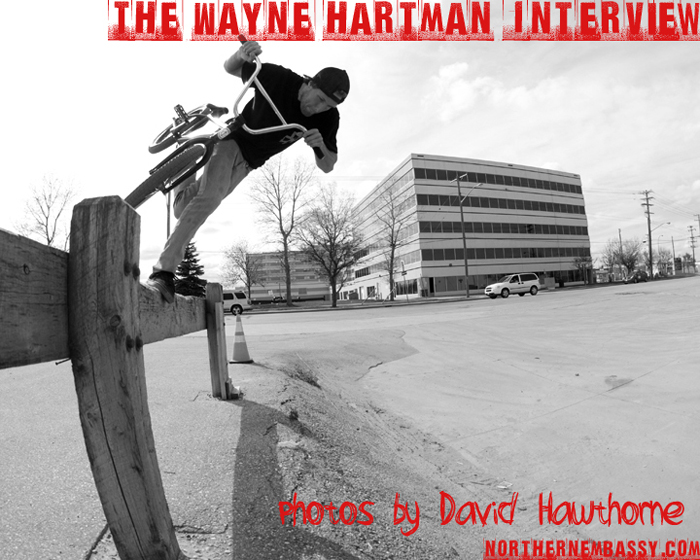 To be honest, when I first hit up Wayne about this interview I didn’t know much about him. I knew he killed it on a bike, and everyone who has ever met him had a lot of good things to say. After putting together this interview I completely agree with everything anyone has ever told me about him. From moving away from his small hometown (population 4366), his dirt roots, to reasons he loves being a Canadian and a number of other topics, this interview covers just about it all. Wayne is a true Canadian BMXer/shredder, so read on. Huge thanks goes out to David Hawthorne for shooting these awesome photos.

When and why did you move to Winnipeg?

The first time I came to Winnipeg was when the Metro Jam (qualifiers) came through. Being from a small town, I had never seen anybody ride like that before. Later that summer I came back on a trip with a few friends and we met Cory Beal, Brooklyn Price, and a few other shredders. I moved to Thunder Bay, ON for a year and when I was tired of it I got a hold of Cory and asked if there was anybody I could move in with. I got hooked up and moved in to a house with some dudes and have lived here happily for a little over two years.

So I guess being from Red Lake, the two closest cities that most people move to are Thunder Bay or Winnipeg? How’s the Winnipeg scene these days compared to when you moved there?

Yeah, most people from my town went to Thunder Bay because of the college and university there. To be honest, most of the people I know that moved to Winnipeg moved here just to live and have fun. The scene has changed here for sure. There’s tons of young shredders popping up from all over Winnipeg. It almost seems like every day you meet somebody new. The scene is definitely growing and it’s good to see.

I’ve heard Winnipeg can be sketchy in some spots and at night. Do you have any wild stories you’re willing to share?

To be honest I don’t have any really wild stories. I try to keep myself out of those situations. One time though I was walking back home from a friend’s place after having a few drinks and I got stopped by four or five guys and one of them pulled a knife on me. I just pushed them out of the way and took off. Not really the manliest story but I didn’t stand a chance. I have met an assortment of cracked out people but usually if you play it cool everything works out. Winnipeg’s sketchy spots are a little weird. It’s like one street will be sketchy and then the next street over will be nice houses and perfectly fine.

I started getting into riding when I was around 12 or 13 I think. I had a friend that got into mountain biking and one time I went over and he was watching a video and I thought it was awesome. I had no money for a mountain bike so I bought a BMX from a friend. I met a few older dudes who rode and they pushed me to try tricks and bigger jumps. I ended up getting a mountain bike later on and rode it for about a year but then got back on the little bike. Later on another friend of mine got really in to BMX and started riding and introduced me to videos and then I really got in to it. The videos inspired me to build my dirt jumps bigger and push my little bit of street riding farther.

What videos do you remember really motivating you? Dirt jumps?? I’ve never seen any Wayne Hartman dirt photos or footage.

Yeah man, that was a long time ago. The closest place for street riding was a half hour bike ride away and there was nothing in my little town to ride so I had to make my own playground. There was a huge empty dirt field basically in my back yard and the dirt was amazing for making jumps so I was out there every day riding and building new jumps. Once I got my license I started driving to street spots and got into street more. It was a nice change from riding dirt and I really liked the creativity that you could have. Sadly I haven’t riden dirt in a really long time.

The videos I remember watching the most when were the Red Bull Elevation edits when they were in Whistler. I loved those edits. I was really into Corey Bohans style back then. For street it was for sure Aaron Ross’s Chill Bro part, Animal All Day, and Voices. Those were for sure the videos I watched the most when I was starting out. 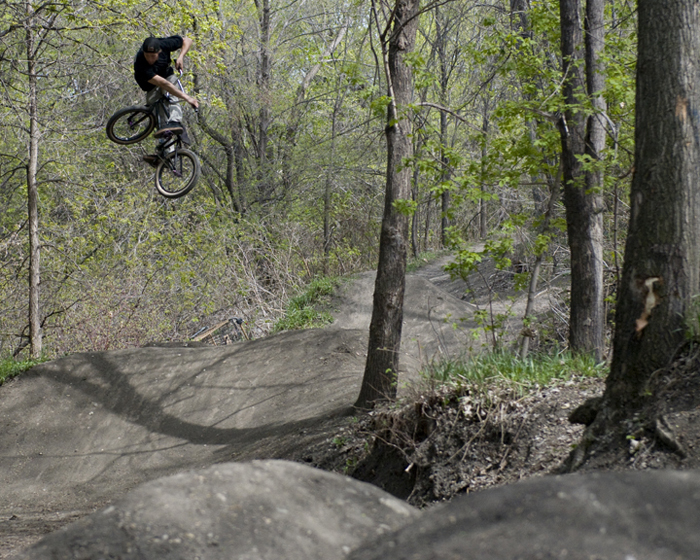 Cranked turndown in the dirt.

What’s a typical week for you these days? Do you figure you ride more street or park?

I wake up early in the morning and go work my construction job until evening, then I usually come home and make a snack then go ride for a few hours. Then I come home make dinner and go to bed. That basically sums up my days. One or two days during the week I hang out with my lady instead of riding and the weekends are a little different. Ride more and hanging with the lady.

I enjoy a good mix of street and park. During the week I ride more park because after work I don’t get a lot of time to ride so I’ll hit the closest park and have a good sesh. I usually ride street on the weekends. If there’s a filming mission or the homies are hitting a street spot during the week then I’ll ride street during the week. 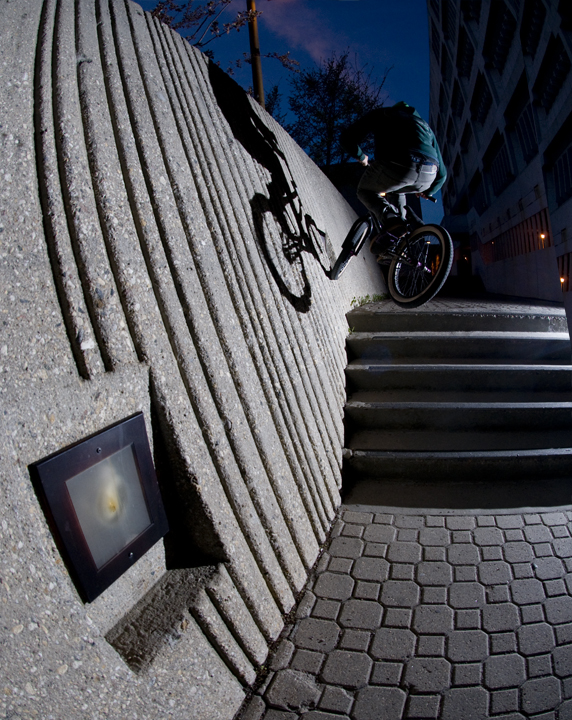 Nose up the wall

Who’s the usual crew of dudes you ride with and who’s shredding in Winnipeg right now?

There’s so many young kids that shred it’s unreal. There’s a huge crew that rides the Forks park nearly everyday so I see those dudes a lot. As for people around my age, my roomate Matt Perrin kills it. Also Cole Jonnson, Cory Beal, Catlin Crandall, Carl Prettyman, and Dave Hawthorne. There’s a lot of guys I see at the parks quite a bit but the dudes I just listed are dudes I see on a regular basis.

Is the Winnipeg scene pretty tight?

Yeah it’s pretty good. Nobody really has a problem riding with anyone else. A lot of the riders are even pretty tight with the skaters. There’s not really any drama.

I’ve heard you’ve been nicknamed Junior. Care to share where that nickname came from?

Haha. Junior? The only person I can recall possibly calling me that is Corey Dewey. Last year when we travelled together on the Ten Pack tour I think we had a short conversation about me being one of the youngest dudes on Ten Pack. I was for sure the youngest dude on that part of the tour so that’s probably where it came from.

You’ve had a big couple years with being hooked up by Kink and Duo. How did all that come about and how stoked are you on those two companies?

I’m super stoked on both companies. I can’t thank either of them or Ten Pack enough for hooking me up, it’s been amazing. All the parts I’ve been riding have been awesome, I love the feel of my bike and the parts have been holding up amazingly. Both companies have been great and Kink especially has been killing it with all the new product they’ve been coming out with. As for being put on the team, it basically came about due to some good friends. I guess my good friend Dave Hawthorne had been watching me ride and was in to what I was doing. From what I understand he started talking to the Ten Pack guys (he knows Jamie, Darcy,and Harley) and telling them about me. Then Cory Beal put together my spring edit for me and that seemed to get around. A few weeks later the Ten Pack tour came through Winnipeg with the Wethepeople crew and I got to personally meet Harley and ride with the crew. After a few weeks Harley called me up and told me there was a spot on the team for me if I wanted. I was super pumped and took the spot. Big thanks to everyone who had a part in getting me a hookup. 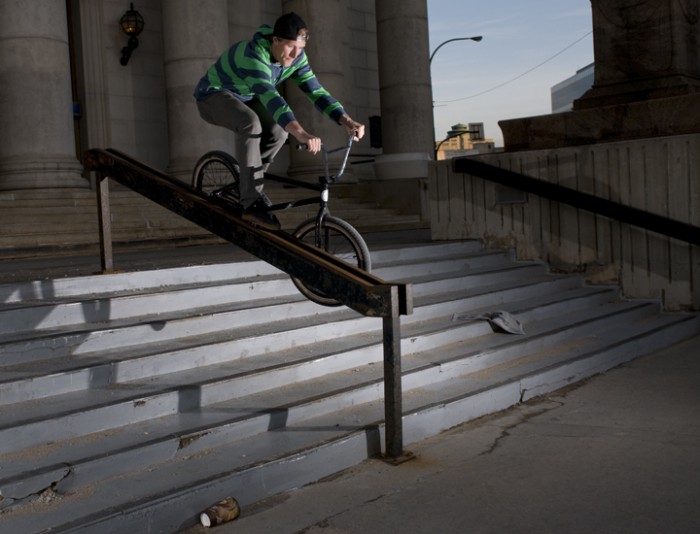 You mentioned being on the Calgary/Edmonton Ten Pack trip last summer. How was that? Was it your first time in Alberta?

It was definitely amazing getting to ride somewhere different for sure. There was a bit of rain but we made the best of it. The locals showed us a good time and it was good meeting new people. It was a good time all around.

I had never been to Edmonton before so that was new. I had been to Calgary once before. I used to play drums for a metal band and we got a few gigs in Calgary and I brought my bike along and rode the Millennium Park.

If you never got into riding/weren’t riding all the time, what would you likely be doing instead?

I would either be skate boarding, playing music, or heavy into a welding/fabricating career.

Haha. There might be some upset people after I answer this question. The whole four pegs thing has kind of been on my nerves. Don’t get me wrong, people have been doing some unreal peg tricks lately but I just find it somewhat annoying that you can pretty much call out every line in people’s videos now a days. Everyone is putting on four pegs and doing the same tricks it seems like. I miss the old Dakota Roche and Nathan Williams and dudes like that who used to have mad style and creativity but have now just thrown on four pegs and just do feeble grinds to 360’s both ways. In the last two years it seems like long nose manuals have blown up. People are doing that trick a lot but I have not gotten sick of seeing it.

Couldn’t agree with you more on that man. If you could only watch one BMX video for the rest of your life, which one would it be and why?

That’s a tough one but I think i would have to take Brighton Ain’t Ready. I love that video. So many shredders and different styles. Dakota, Matt Roe, Dan Lacey, Hoang Tran. Everyone just kills it.

What are five places you’ve never been to but want to visit someday?

Obviously Barcelona, I think that’s on every riders list. I would enjoy getting out to B.C. some day. California for obvious reasons. Texas seems rad. Pretty much any where warm or places with awesome scenery.

What’s the best thing about being a Canadian/ living in Canada?

I’ll be going on a Ten Pack trip sometime this summer, got some pretty big jobs coming up for work, I plan on going to school this winter, and just riding my bike as much as I can throughout the summer.

Any thanks or words of wisdom?

Big thanks to Dave Hawthorne, Kink, Duo, everyone at Ten Pack, family, every one that I have ridden with that keeps pushing my riding and inspiring me. Thanks to everyone who took the time to read through this. 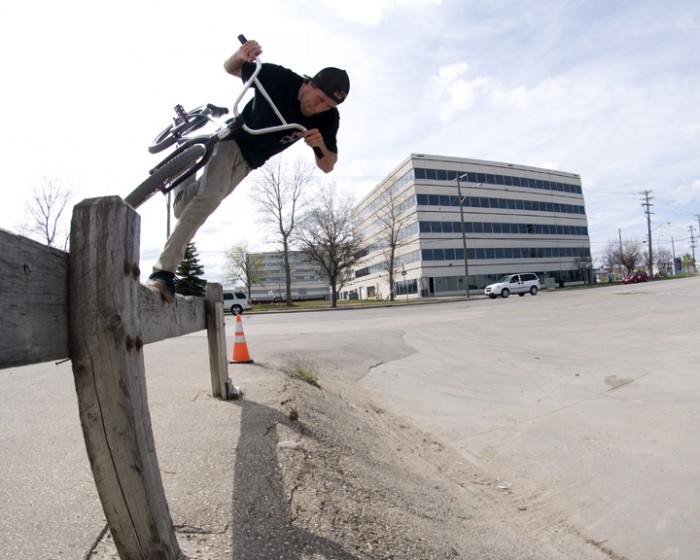