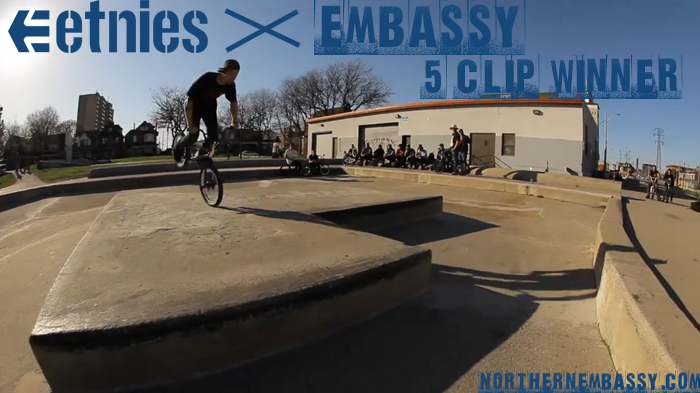 This might be the corniest thing I’ve ever said/written in my entire life but honestly all 6 of these edits are winners. It was really tough to chose just one, each edit is so awesome in it’s own way. Read on to see 6 awesome videos, including the winning edit.

6th place – Kyle Higgins by Byron Kutchera and Ian Fleming/Business
Kyle kills it in the edit, that gap and icepick we’re crazy, plus he hops onto a dock. I really liked the fact that it was filmed entirely on the Halifax waterfront and Byron/Ian did a really good job filming and editing this.

5th place – Chase Davidson and Alex Passa
The guys had the most interesting story behind their edit.
“During a recent trip from Windsor up to Toronto last week, I got into a small car accident after getting lost trying to meet up with Chris Silva (not to mention it happened to be on my dad’s birthday). This resulted in Alex and I coming across this spot totally on accident. We proceeded down an at least 75 foot hill to chill out after the accident, and after walking around down there we noticed this perfect setup and immediately went back up the hill to grab our bikes and camera. Here’s a 5 clip edit that came about thanks to our misfortune!”.
What is BMX more than making the best of a shitty situation? These guys did some crazy shit over the wooden rail and the fact they only found this spot because of some misfortune was pretty awesome.

4th place – Owen Dawson by Gustav Ekelund
Mix the very creative Gustav Ekelund and the up and coming shredder Owen Dawson and you are guaranteed a good result. Gustav had my favorite intro of all entries and Owen dropped 3 serious handrail bangers. Watch out for these two!

3rd place – Jordane Dubois by Vlad Poloukhine
These two hit up Montreal’s famous Big O and filmed some serious bangers, including the last line which is one of the best lines of the entire contest. If you’ve ever ridden the Big-O you know how crazy the up wallride to hang-5 across is and how big that barspin gap is as well.

2nd place – Carl Arnett by Riley McMaster
Carl’s edit by Riley McMaster is really damn good. Refreshing street moves from Carl, really good and fitting song (of all the edits Riley made, this song works the best), good vibes and Gnarwhale titles. Filmed in Vancouver, this edit looked like alot of fun which is what BMX is all about.

1st place – Jordan Dwan filmed by Brad Hill
This duo put together a ridiculous edit. We liked the nose theme, and the last clip is one of he craziest clips of the entire contest. Awesome filming and editing and 5 ridiculous bangers. I don’t even know how many times I’ve watched this edit in the past week. Congrats on the win and look for your Etnies prize pack in the mail real soon.

A huge thanks to Etnies/Timbomb for making this contest happen and a huge thanks all the riders and filmers who put in work!!