Posted at 12:24h in ARCHIVE by Jeremy Deme 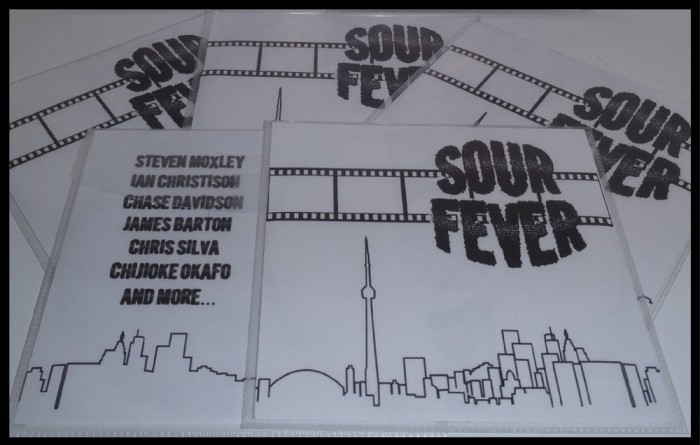 I’ve said it before and I’ll say it again, bmx dvds, and even more so Canadian bmx dvds, need the support from as many riders as possible. With web edits at an all time high, there’s less and less dvds being released and footage is forgotten days after it’s online release. Sour Fever did things right and put in work all summer to make this dvd happen and it was well worth the wait. Read on for a short recap of this dvd and make sure you grab a copy here for only $7!

This is long overdue, the Sour Fever DVD has been out for a few months now and is definitely a real good watch. The intro is very clever, I don’t want to spoil anything for anyone but Silva embraces hate and pushes people to do their own thing and that’s something you have to admire. Doing a dvd in itself is an awesome thing to do, it’s such a rarety these days that Sour Fever deserves everyone’s support for doing it. First part and for sure one of the best in the dvd goes to Chijioke Okafo. There’s quite a few things in his part that I’ve never seen done before and everything else is real different and good. The entire part is very diverse, I don’t think he did any tricks more than once and everything he does is on crazy TO street setups. It was sick to see a full street part from Chij, definitely gets you pumped straight away. Chase Davidson (who recently hooked up this arizona edit) shreds throughout his part at full speed. Steven Moxley does a bunch of Moxley-esque trickery, tech park as usual. The “dudes” section is sick, I’m not really sure who all the homies are in that section but there’s definitely some sick shit in there. I’m pretty sure there’s a clip of Cory Beal riding with a brake but I could be wrong… one of the ICC guys does a crazy ledge hop to rail, followed by a real tight hanger tooth. Then comes Chris Silva, the self filming machine. I’m not gonna lie, I couldn’t wait to see Silva’s part when I first heard that there was going to be a Sour Fever dvd and it did not disappoint. Constantly changing his setup (pegless, brakeless, 2 pegs, 3 pegs, 4 pegs), ridiculous spots and even more ridiculous riding. Like Chijioke’s part, and like all of Chris Silva’s video parts, there’s a ton of variety in it which is alot of fun to watch. From big shit to tech rail stuff, Silva kills it. His last few clips are ridiculous, his banger is terrifying, if you haven’t seen this part yet, your missing out. Believe it or not, no Neil Young song for Silva’s part, it’s almost weird… James Barton comes through with a bunch of crazy tech street. He’s put in work over the last year with a bunch of crazy web edits plus this part, watch out for this kid. Last part goes to Ian Christison, who is renowned for riding real fast and crazy freecoaster stunts. This part is exactly that, but faster. Superman off tree stump, jumping gaps faster than I’d want to be bombing down a hill, mixed in with s some crazy nose wheely’s and backwards shit, his last couple of clips are Sean Burns style dead man gaps. His part is definitely very scary and very entertaining. After the credits you realize that Ian didn’t only give these gaps one attempt, which is even more ridiculous.

Another upside to this dvd is the countless crazy Toronto spots. It makes your realize how crazy that city really is, if your willing to search. A dvd review should usually have at least one downside to it and the only thing I can think of for this dvd is Silva’s camera quality. In all fairness it gives the dvd a raw feel which may have been exactly what Chris was going for, but colors would have looked better on a 3chip (get a VX Chris!!).

Silva has just posted up the bails section from the dvd (here), and the Sour Fever dvd is currently on sale for $6.99 on the Sour fever site here. For $7 buy one less pack of cigs this month and support these guys for busting their asses and putting in work to make this dvd happen.