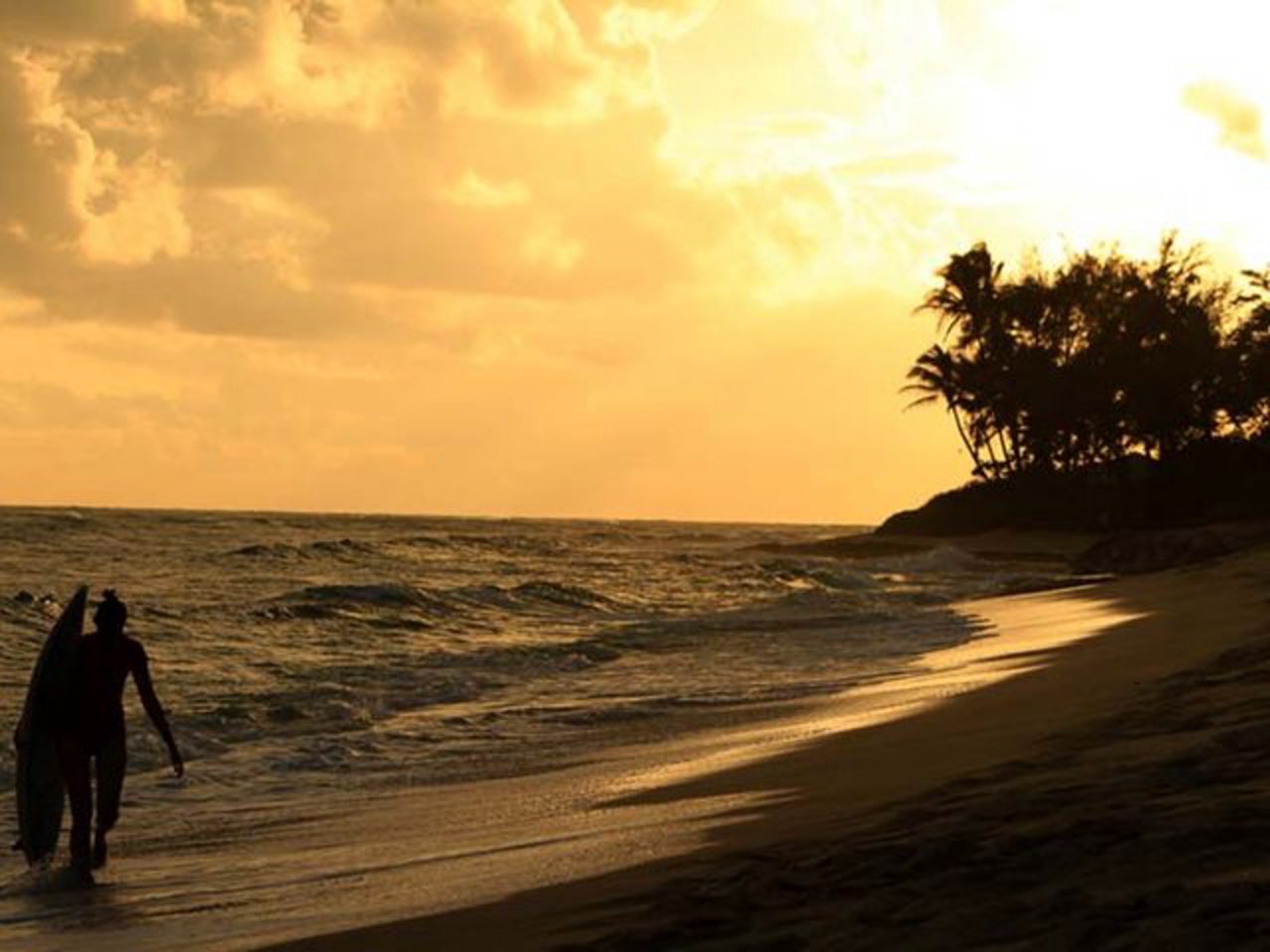 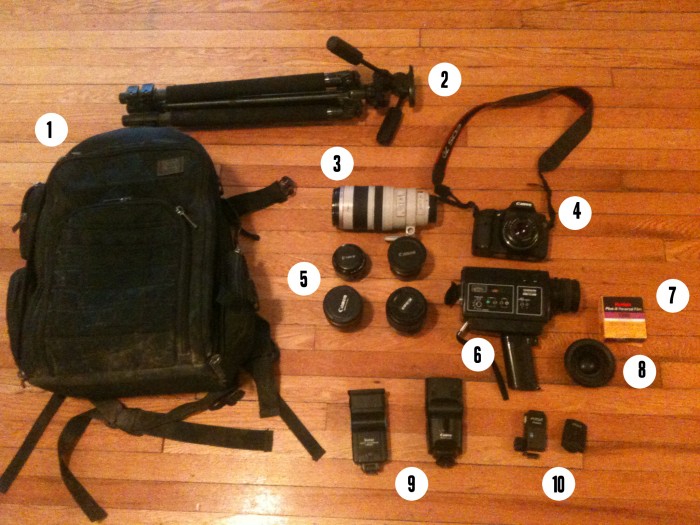 Chris Chitaroni has been making short films, in and out of BMX, for quite some time now. From starting his Landozine video series and publishing a zine under the same name in Sudbury, ON for years, to putting out web content from travels all over, to now living in Ottawa and editing for the CBC, he is no stranger to changing camera technology. A someone who always has a range of equipment in his camera bag, and not afraid to share his opinions on anything, I asked him to share the contents of his bag and some questions about shifting from independent pieces of equipment for video and photos to one camera. Click below to check it out.

1. Ogio Camera Bag – This thing is great for holding gear, but gets to be pretty uncomfortable when you have it on your back for long periods of time. I lugged this around England two years ago and swore I’d never do it again, but then took it with me to Barcelona again this summer and was reminded of the terrible cardboard bottom that digs into your back.
2. Velbon Carbon Fibre Tripod – This is an ultra lightweight full size photo tripod. Great for lugging around spot to spot, you barely notice the weight.
3. Canon 100-400 L series lens. By far my favourite lens to shoot photos with. Also great for creeping on girls.
4. Canon 7d body with a nikon 50mm lens mounted on it, using a nifty little 10$ adaptor I bought on Ebay. Lets you run vintage, manual nikon lenses on it.
5. My lens collection, a 50mm f1.8, a 20mm f2.4, a 15mm f2.8, a 17-85mm f2.8.
6. Chinon 8mm movie camera. Full manual controls. Found this on eBay for 30$ a few years back.
7. Kodak b/w 8mm film.
8. Fisheye lens for the 8mm camera.
9. Flashes.
10. Wireless Flash transmitter from hongkong, another cheap eBay find.

Do you consider yourself primarily a photographer or videographer?
I would say videographer, as most of my work is done in that medium. However I believe knowing how to take a good photo makes me a better videographer. The principals are the same really.

How long have you been filming/shooting photos for?
I started filming BMX in 2001, so I’ve wasted a good 10 years behind the lens.

How long have you been shooting with one camera?
Shooting with one camera has always been a dream of mine. I knew it would happen eventually. It was always such a pain to haul around my old GL1 setup with all the lenses AND my SLR with all the lenses. Sure enough with the new generation of DSLRs that dream became reality. I picked up the Canon 7D in 2009 and haven’t looked back. For on the go BMX filming DSLRs are perfect. They obviously have their limitations but as long as you work within those limitations I think the end result can be superior to anything else out there.

What advantages do you find you have with your choice of equipment?
Well being able to use one camera to take photos and video is great as I mentioned before. Throw a prime lens on there and you’ve got some amazing depth of field to work with, or toss a fisheye on and close that aperture up and you can film roll by’s no problem.

Any disadvantages?
Limitations, there are lots of them. Focussing on the go is shit, I have to avoid it outright most of the time. DSLRs (unhacked) will only allow you to film 12 minutes at a time, and that is if the camera doesn’t overheat before you get to 12 minutes. And from a professional standpoint, when you show up to a gig with an DSLR to film an event you don’t look as professional as if you showed up with a big clunky production camera. (Even if the quality is superior on the DSLR).

Do you save what you’ve filmed/shot for DVD’s and other projects, do you prefer releasing it to the web, or does the rider you’re filming dictate where it goes?
I’ve always been quick to release to the web. I was putting web videos up on the Landozine site before youtube was a household name. We were doing Sudbury edits back in 2003. I’ve always enjoyed getting stuff out instantly, but I generally compiled it all onto DVDs at the end of the year for the Landozine videos. (some people complained that they’d seen most of the footage online before though, but everyone is happy to have those DVD’s now all these years later)

With the advancement of DSLR’s, and cameras in general, where do you see the future of the equipment used in ‘action sports’ going?
In the 1980s the big marketing point for junk was to put a clock in it. Companies made a lot of money because people love gimmicks. Now the trick is to put a camera in the same useless junk. I saw a video online a while back that was shot with a barbie doll (barbie has a camera in her… perfect for homemade hidden sex videos).

We’re at a point where filmmaking in general is accessible to everyone. People are pushing the limits of what is possible both technically and stylistically every day.

What’s your biggest pet peeve when filming/shooting?
I actually thought really hard about this, and I don’t really have any. BUT, I will use this opportunity to express my discontent with the fact that everyone with a camera thinks they’re a professional photographer these days. I’m sick of seeing water marks on bullshit photos on people’s facebook, or terrible glamour shots with ugly girls.

Also, just because you own a macbook and like hip hop DOES NOT mean you’re a DJ. You can’t just stand on stage staring at your screen for 4 hours pressing play each time a song ends and command any kind of respect from the audience. My dad does that at family events, and believe me Bob ain’t no DJ.

What’s next for Chris Chitaroni?
I’m probably going to go play some Call of Duty with the rest of the Ottawa crew. We don’t ride bikes anymore. Online. All day. Killstreaks.

But seriously I’m applying for government funding to produce a feature film. Working with some colleagues at CBC and longtime writing partner Jimm Moir, this project is going to be awesome.

If a person or company wants to work with you, how should they go about getting hold of you?
They can email me at chris@chitaroni.com or check out my website skywardkick.com, 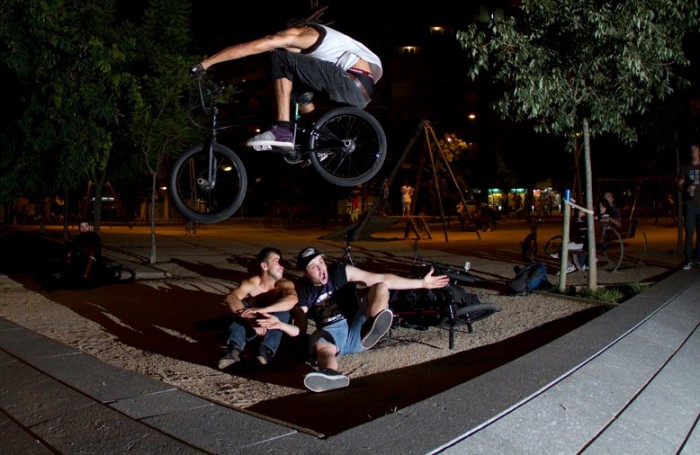 Check out more of Chris’ videos and photos on his vimeo and at Capital BMX.