Posted at 07:23h in ARCHIVE by Prashant Gopal 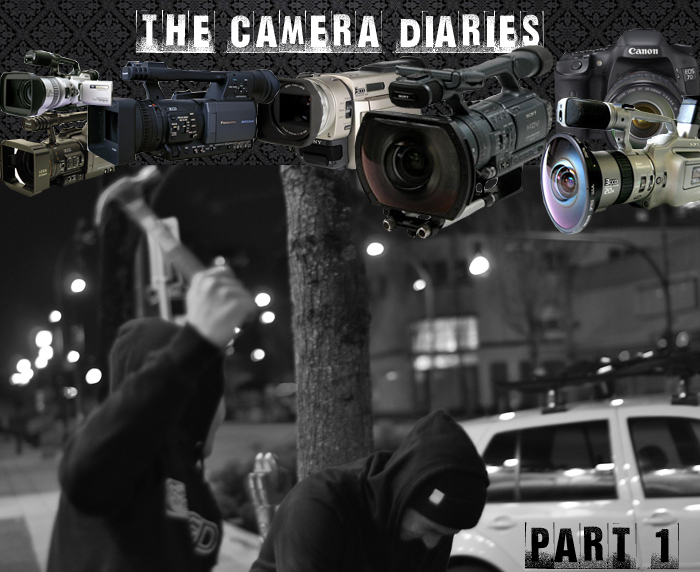 If you are the filmer for your crew, you tend to tag along on the most adventures and excursions. If someone is doing something notable, chances are that you will be there. So with the increase in duties often comes the increase of wild stories. That could be police encounters, being and filming in sketchy areas, or being the first to witness bangers, wrecks crashes, and more. We thought we would ask a number of noteworthy filmers across Canada of some of their most memorable experiences while out and behind the lens.

Embassy’s own Jeremy Deme starts this feature off with his tale of the Kamloops disaster. Click below to read his story and check back soon for part two.

There were so many options for nicknames of this trip, Dropping Hammers, Getting Hammered, Hammer Point, Hammer Head, and lastly A Complete Disaster. I took the traditional route to keeps things simple and maybe more serious. I’d been wanting to write this up forever now, but with legal issues and such, I felt it was probably better to wait. Over a year later, here’s the story of a shitty day last spring.

The story starts with Fluke (Luke Santucci) being down at my place for a few weeks. We had been dying to ride. We’d been riding between the rain for the past couple weeks but a long weekend was coming and it was 90% rain around here for the entire three day weekend. Where to go to avoid the rain? We had two options, Kelowna or K-loops. Lazerdick (Andrew Lazaruk) had a jam going on that weekend in Kelowna and it sounded like a good time for sure, but we were feeling like hitting the streets so we chose K-loops. Neither of us knew much about the city, and the little we knew about it sounded as though it could have some legit spots and a decent skatepark. We tried to get some other dudes to get on board for the trip but everyone was working so we decided to go anyway.

We drove down early Saturday morning, planning to stay there that night and the possibly hitting Kelowna Sunday evening, depending on spots and weather. I remember the first thing we did was eat lunch at A&W in the downtown area. It’s weird how the city had a weird feeling of just empty, nothing going on and very few people anywhere. We got a hotel, and headed over to the skatepark to get warmed up. The park was pretty dope, and I had heard that skaters usually aren’t too stoked on bikes there, but we had skateboards with us and I filmed Luke on rollerblades for over an hour so I guess they let us slide. Either way, it was a good session, Luke got some web clips (which we would lose) and we headed on to the streets. We started by checking out the university, then hospital, we found a few decent things, Luke clipped up some more and we moved on into the downtown core area.

Again, the feel downtown was weird, and pretty empty. At the time it seemed like anywhere else, having been in way sketchier areas you don’t think anything of it, but looking back on it you realize things that should have made us move on. We rode a couple spots, looking for something better. The sun was starting to go down and it was getting pretty cold out. We rode by this double ledge set up, basically two pretty long flat ledges with one being a foot higher than the other. Luke was riding in front of me on the street and he rode right by it and kept going. I yelled up to him, turned back to check it out closer, thinking it would be a good spot for him to manual the lower ledge then hop up to nose manual across the higher one. This is the moment I look back with the most regret. Luke was already past the spot, I even rode past it but turned around to get a closer look. When we got back to the spot, Luke looked at it, and wasn’t even that into it. I convinced him to get a couple tries in. I put my bike a few yards away from the ledge, got the camera out and started filming. The spot was kind of weird. It was basically on an indent of a building on the corner of two streets, basically in a corner. Luke gave it a few more tries and was getting closer. Out of nowhere (seriously) two dudes come round the corner and straight to us. The dudes were pretty sketchy, I could tell something was up so I instantly walked back to grab my bike. They started asking us what we were up to and so forth but barely even giving us time to respond. They were definitely on something. One dude had bloody hands and shit. One of two dudes asked to ride my bike, I told him it wasn’t good idea, it was brakeless and it could be dangerous. He got aggressive and told me to give him the fucking bike (not gonna lie, I would give up my bike over my camera anyday). I gave him the bike and almost instantly he was gone with it. At this point it was fair enough to guess I wouldn’t see the bike again but that was the least of my worries, all I could think of was saving the camera and the footage on the tape inside the camera (Jaumell was in town the previous weekend and we had some bangers on the tape).

The second guy was still right in front of Luke and I. I turned around to start walking towards the camera bag and he told me to give him the camera. I said something and Luke said something as well and basically he wasn’t having it so he starting pulling on the camera. I kept pulling the camera towards me hoping he would let go and that we wouldn’t drop it. He kept pulling with one arm and then pulled a hammer out of his jacket with the other arm (at this point the guy who took my bike was back was right beside Luke). He started swinging the hammer at me while I was still pulling on the camera, I avoided the first two swings, the third one hit my shoulder, and the fourth connected with my forehead. I let go of the camera and hit the pavement. I came back to and Luke was yelling for help and watching where the dudes were taking off too and then pedaled after them. 15 minutes later, the police showed up and then an ambulance. A bunch of BS hours later, my bike is found, I have an egg shaped head, and Luke and I are back on the road. The whole incident probably happened in seriously 60 seconds. Everything happened so fast that we barely had time to know what was happening.

There were a few ironic things in all of this. One, we rode right by the spot, and for some odd reason we turned back right into the shit show, completely my fault but still weird. Secondly, right before going out to ride street, after riding the park, I put a beanie on. The beanie blocked alot of the blow, and I definitely would have had a big ass scar on my forehead if it wasn’t for the beanie. Third, the fact that I was using a new death lens for the first time (it was on the camera when it got jacked). Fourth, I lost a bunch of Jaumell footy we filmed a week earlier. I lost all the Luke footy we filmed that day, again some bangers. Lastly, and the one I thought about everyday for a while after, the hammer could have easily been swung the opposite side up, the sharp end could have connected with my forehead and shit could have been alot worse.

So the moral of this story, get insurance for your camera equipment, don’t try to film at sketchy spots if you are only two dudes, and carry something that can be used to fight off crackheads. I’ve seriously been to so many way sketchier spots filming and nothing ever happened, you almost get in the mind state that it’ll never happen but that’s exactly when it happens.