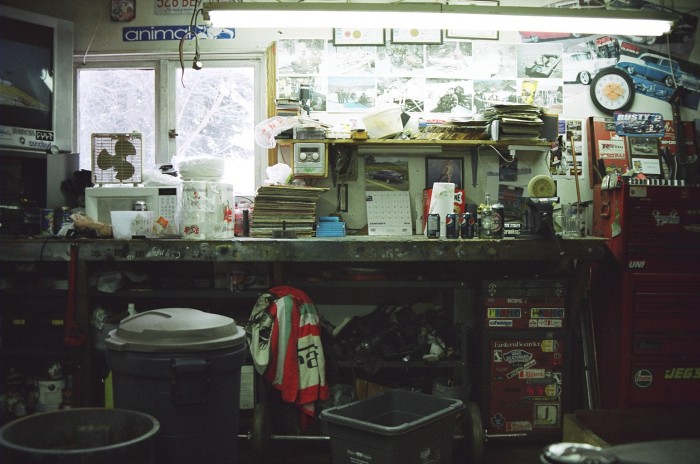 At the core of most scenes is something central that acts as a hub for its riders. It could be a shop, spot, park, or BMX house. In the case of the Niagara Falls area BMXFU contingent, it is the confines of Chris Orbell’s garage, otherwise known as Orb’s Garage. Here Chris seems to work on everyones bikes with a deep supply of tools and paint, ready to fix anything that might come his way, or customize someone’s bike in whatever way imaginable. I was curious to know more about the space, so we contacted Chris to get the scoop. Brad Hill posed some questions to him, snapped some photos of the garage, and gathered some insight from others on what makes Orb’s Garage so great.

“The Garage. It’s the local bike shop, your friend’s living room you go to chill in and watch videos, the local pub, the pre-ride meet-up spot, the parking lot where you leave your car during a road trip, and even a spare bedroom after a night of getting FU’d all rolled into one.

To some people reading this, I can imagine that they’ll wonder what the big deal about this place is and how it warrants a whole post on The Embassy but to anyone that’s ever been there even once they’ll know its much more than just a garage. It’s played a huge role in shaping the BMX scene in Niagara for a long time. Hundreds of different bikes and countless riders spending hours inside fixing something so they could get back on the streets to keep progressing and defining what many people have come to know as BMXFU. Even today it’s still allowing a whole new generation of kids to be able to keeping riding their bikes due in large part to the apparently endless supply of extra parts that seem to be in there.

I personally can’t wait until I can get back there this summer. Grab a few beers, a big ol’ Frijoles burrito, head over to The Garage, have Orbs make fun of someone’s bike for how badly something is running (or just how stupidly they put their stickers on) before fixing it and everything else on there, and spending a few hours with a whole bunch of my good friends. Just watch your seat though, its Garage rules bud.”

“When it comes down to it, Chris Orbell’s garage is pretty much the epitome of a central point for a proper scene. I’d been acquainted with the FU Family for less than 24 hours before I paid my first visit to The Garage, so hanging out at one of their houses felt a little odd. Like I said though, it’s part of a proper scene. Chris and the guys were really hospitable and the place itself had the vibe of the perfect local bikeshop mixed with your friend’s living room. I say local bikeshop because while it’s as clear as day that it’s Chris’s workshop/spot it seems as though he spends as much time hanging out with his friends as he does making sure their bikes don’t fall apart on them.

It’s probably fair to say that most people would kill for something like The Garage in their town, a guaranteed spot to hang with the guys, work on bikes and start a session. While I was only in the area for 2 days or so and it pretty much felt like sitting around with the lads at home, always a good sign. I got the impression that it’s just where those chaps go to hang out, watch videos and talk about everything and nothing. Good times.” 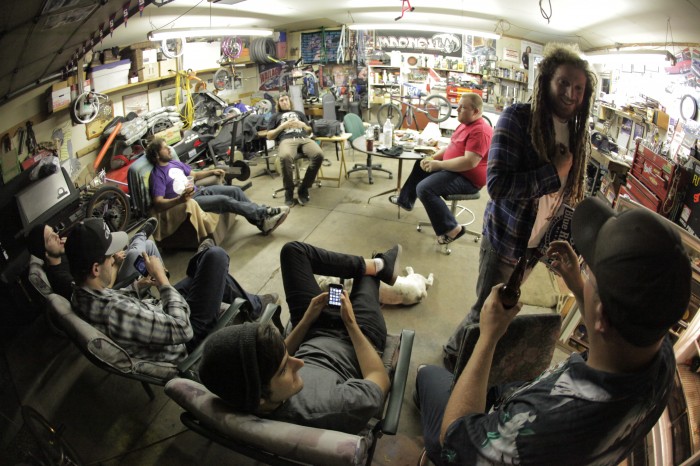 Guy stuff in the garage.

What exactly is the Garage?

It’s actually Big O’s garage. He built the garage around 1990 I think. I still remember the night the cement truck backed in to poor the floor!

The Garage has been around forever. When I was 14, I remember seeing videos of you guys hanging out in there. How long has Big O (the boss) been cool with letting a bunch of kids just hangout there?

Earliest I can remember is around 7th or 8th grade was about the time that the first BMX got ripped apart and painted, and not with spray bombs either haha. It was little cans of Trimclad and brushes! I think the bike was a venture BMX haha.

Worst bike to work on?

I think Charlie takes the cake on that one haha. Sometimes its several weeks between Charlie’s Garage visits so one or two broken spokes turns into 12 or 13 pretty quick, not to mention the fact that every once in a while he gets his hands on some of the most disgusting colours of spray paint and likes to do some customizing. 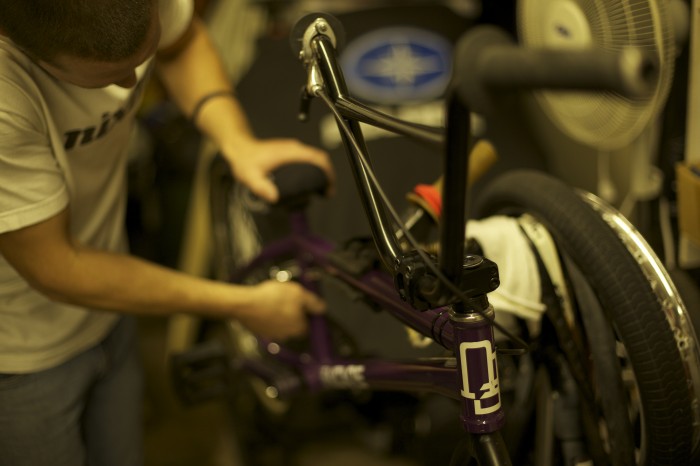 Tell me about the time Krupa painted his bike yellow if you remember.

Can’t help much on this one other than the fact that it probably looked like shit.

I don’t think people realize that the Garage has become less of a mechanical spot and more of a meeting place. The Garage has it’s own little family outside of BMX riders, let me know about them.

When there’s no BMX in the Garage you can find my dad (Big O), my cousin (Big Jeff), and good friend Jeff Vyse (Little Jeff) chilling, watching Nascar, or talking about hunting and obviously crushing dozens of beers. Those three dudes are the “Real OG’S” and they have regulars that attend as well.

Tell me about Garage night and the people that make it happen.

Garage night has been around for years! It started as a bbq night for Big O and his buddies after work and it always fell on a Tuesday because thats the day mother worked till 9. It didn’t matter if it was a snowmobile, someones pick up truck or even Santa’s sleigh! Something was getting fixed. These days Garage night still falls on Tuesdays and the faces have changed but the good times haven’t. We usually meet up around 7:30 – 8:00 and fire up the bbq or fryer and go to town.

We’re starting to get on a more simple way to do the food now where a day or two in advance someone will go out and get enough food for the whole bunch. It usually works out to be $5 for your meal and byob/w. I can’t think of a better spot to be on a Tuesday night. Normal head count on a Garage night is 12 – 15 people. Garage night wouldn’t exist without the help of Big O and Big Jeff, those dudes man the grill like no other. Thanks a ton guys! 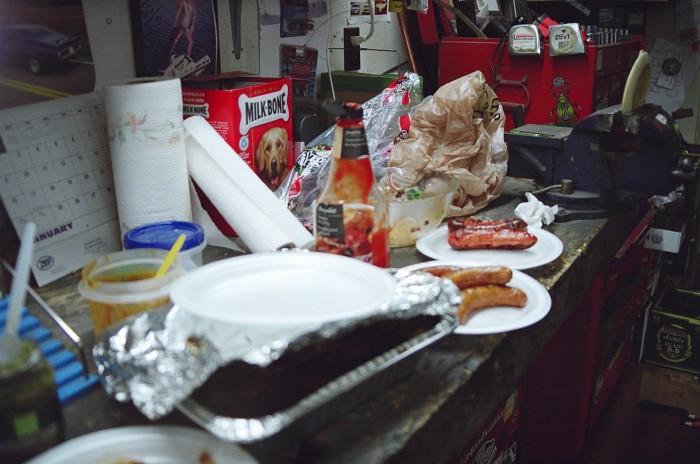 Tell me a good Ivan experience.

The one that sticks out in my mind was him being way too young to drink and him drinking way too much booze. He sat there and puked in a beer cup and drank it then puked back into the cup and I think he might have even tried to get it down one more time before he switched to the garbage can. Like I said, if these walls could talk…..

You got a sick chin up bar in the garage…

Yes I do! Can’t remember the year but Jimmy Levan was walking around the Toronto Metro Jam with a pair of neon pink handlebars and I had to have them. I manged to track him down and Greg Henry had a few extra bucks to help me come up with the $50 that Jimmy wanted so he could party that night. Next thing I knew I was the proud owner of hot pink Metal Dirty Dirty bars! At the time the only other pair were on Jimmy’s bike. I never wanted to sell them to anyone or give them away. Over the years bars have changed so much and these became outdated so they ended up just getting moved around from shelf to shelf till one day they became the chin-up bar mounted to the ceiling in the centre of the Garage and thats where they will stay. 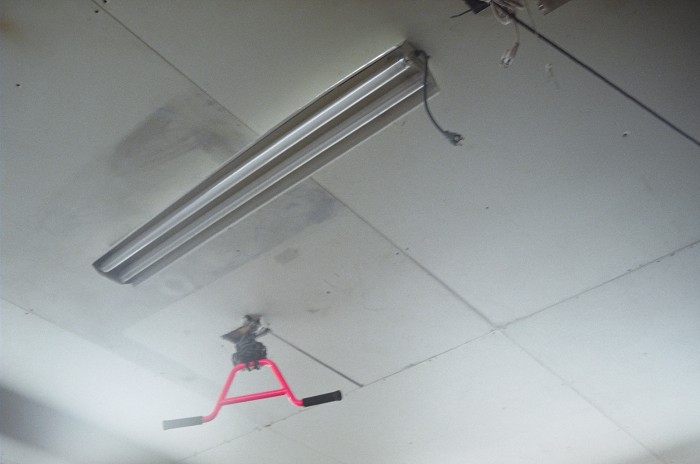 People often hang out at the Garage, if you’re there or not, and most of the time, it’s with your dad, Big O. How does he feel that his garage has become so important in our little BMX community?

I think that there were a few years that Big O would roll home from work and the last thing he wanted to see was 6 or 8 little shitheads with bikes pulled apart into a million pieces scattered all over his garage when all he wanted to do was wind down a have a few man sodas. Sorry dad…..

But over the years he started to get to know the guys more and more and he watched us grow up and soon enough he would be coming home from work to 8 or 10 bigger shitheads in his garage but instead of the bikes being in a million pieces now we are there to enjoy a few man sodas with him and the bikes are all together. Big O is one of us and I think hes proud of what the scene has become and that a lot of it is because of the garage that he built. Never in a million years did he think that his garage would be in a magazines and videos sold all over the world or featured on a website. He even put a FU sticker on his own car and snowmobile helmet. Big O is the man.

What’s the unwritten rules of the garage?

Take your chair with you if you gotta piss. What happens in the Garage stays in the Garage and try not to bring less than a 12 pack if I gotta work on your bike.

A lot of people contribute what they can to the Garage, just to help it running smooth. This is your chance to give them a shout out.

Big O, Mother and Big Jeff are the only 3 names I’m going to put down because with out these people there would be no Garage. There are dozens of people who contribute to keep the place rolling whether it be with old bike parts or a pack of cheese slices on Garage night. You guys know who you are and I thank you. Let’s keep the good times rollin’. RIDE ON. 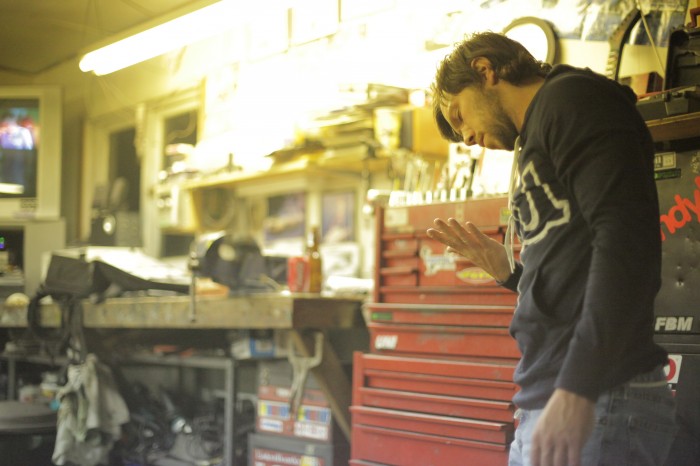 Chris Orbell getting his hands dirty in the Garage.